The shipping industry, whether for dry bulk, tankers, containerships or offshore, has ridden a monumental wave in 2016, a wave as impressive as Kanagawa’s Great Wave – metaphorically speaking.

The dry bulk market first experienced the worst ever freight market in recent memory but then tripled in a matter of months. Tankers have seen their rates halved, and limited interest for secondary market acquisitions and relatively weak prices. The containership market saw a government-blessed entity (Hanjin) go belly up, which pretty much by itself sums the state of the market; also, seven-year old panamax containerships these days are heading to the scrapyard. Finally, the offshore market has seen brand-new, top-tier drillships idling while another huge oil discovery in Texas has made offshore drilling an even more precarious proposition.

However, with the spirit of being thankful upon us, for the ‘harvest’ the industry has had this year and the overall results accomplished (mostly intangible results), one has to be hopeful and even thankful for the shipping industry’s prospects.

The drop of the market, especially in the dry bulk, has been the first time that people have gotten scared. Any other in the past, between 2009 to mid 2014, any dip in the market was considered a buying opportunity. Each time that rates would pull down asset prices, shipowners would generally use such an occurrence as an opportunity to buy vessels in the secondary market and also to order more newbuildings. The dismal state of the industry at present is partially the result of such an attitude. In 2016, for the first time, at least in our experience, one would see shipowners and operators being scared.

Dry bulk vessels burning cash day in and day out for more than a year has caused cash reserves to dwindle. On top of it, many owners had capital investment obligations due with their newbuildings. And, of course, no bank was in a mood to entertain new clients or lend to projects that didn’t perfectly fit their ‘box’. We are of the opinion that being scared (and possibly throwing in the proverbial towel) is medicine that the market had to taste some time ago in order for cooler decision-making to prevail. Still, now that the market has been improving, we have seen many generous souls (with mostly shallow pockets) buying vessels with all they can put together; in the stock market, this is called a ‘sucker’s rally’.

The continuously bad market has been forcing many shipping banks to get more active with their portfolios; some have been arresting vessels, some have been forcing their clients to consolidate, a lot more banks have been selling shipping loans to institutional investors and even more banks have stopped lending to shipping altogether. We think that we all have to be thankful for such activity; maybe not a perfect solution, but at least it curtails the extent of the ‘zombie-ness’ of the market, where ships and companies were being kept afloat by life support; at least now, some of the weaker hands start washing out. Private equity funds buying shipping loans will also be expected to be active and keep the pace of ‘natural selection’ on course. However, we all have to be thankful to shipping banks for stopping lending (this is the general truth, in spite of some banks claiming otherwise) as this has curtailed excessive enthusiasm in the market, and allow people to have a chance to let sink what’s really the state of the market – shipping banks are not and will not be what they used to be. Lack of debt financing has also brought up of the cost of financing for shipping, which we think is a healthy development; shipowners had gotten accustomed for too long to cheap and easy money at terms which were not commensurate with the industry’s risk profile.

We now see that shipowners have been adjusting their expectations that debt financing in shipping cannot be had for less than 6-9% for the majority of the shipowners, much higher than other lower tier owners and projects. Thus, we all have to be thankful for the shipping banks forcing a proper pricing of the market, which is a sign of a market sailing toward the right direction. (Incidentally, shipbrokers and other service providers are clearly not thrilled with the state of the financial markets as this has cut down on volume of transactions and commissions, but again, proper pricing and service have to be re-based anew for a functioning market.)

Investments in shipping by institutional investors have set a bad precedent, and at least on paper, losses from PE and public investments in the shipping industry of the few last years should be topping $15bn, again on paper. Some funds have lost big money, and they have been written about in the press.

However, there have been many more smaller funds with relatively short track records and marginal Assets Under Management (AUM), often in the $1-2bn range (yes, $1bn is a small amount of money in this world); for such funds, any losses in shipping, even small ones, can be ‘life threatening’. All in all, PEs have not been doing well as a low interest rate environment and hot stock markets have forced them to compete for same strategies and investments in a crowded market, thus allowing for paltry returns – often much lower than recent returns in liquid stock markets. However, the point that we all have to be thankful is that there is little appetite for newbuildings by institutional investors, which we think it’s a very crucial point. There is plenty of spare shipbuilding capacity, and in general good appetite by shipowners to order more vessels (but again, when owners didn’t like more vessels)? However, with institutional investors shying away from newbuildings, shipping banks shying away from shipping altogether, and export credit offered prudently to serious players, we find this point ) of no new money coming to the industry to expand supply) seriously worthy of being thankful about.

Despite the decent state of shipping at present, comparatively speaking to earlier in the year, we believe that there is still a long way until the light at the end of the tunnel. Certain factors have been developing favourably for the market, and we shortlisted three of them above to be thankful about; however, in many more respects, the market is in bad shape. There will be many more bankruptcies and defaults – whether for companies or projects, consolidations and merges, companies leaving the industry, professions and functions forced to change business models. Some people will be thankful but for many, it may be a thankless industry in the next few years in many ways.

But it will be a better industry serving the supply chain in a more thorough and efficient way based on economics and technology instead of gut feeling and speculation. Probably we ought to be thankful for that, too. 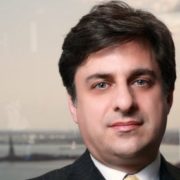