A 33-page report from class society Korean Register (KR) has highlighted the advantages of ammonia as a ship fuel, the latest in a series of developments in recent months suggesting ammonia will play an important role in shipping’s path to decarbonisation.

A big plus with ammonia, according to the KR report, is in pricing.

The total energy cost when including the production and transport of ammonia alongside two other fuels being touted as shipping’s fuel of the future makes for interesting reading in the KR report.

Ammonia is a flammable gas, but the risk of fire is low compared to other fuels since the flammability limit is small, and the conditions for ignition – spontaneous ignition temperature and minimum ignition energy – are difficult.

The most dangerous property of ammonia is its toxicity. Therefore, using ammonia fuel requires a suitable sensing system and additional safety systems such as ventilation and water sprays to dissolve ammonia.

Another negative alongside the toxicity issue identified by KR is its density. Liquefied ammonia has a relatively low volume energy density and requires a tank about 4.1 times larger compared to conventional fossil fuels, so owners would need to accept freight loss if opting for the fuel.

Compatriot Daewoo Shipbuilding and Marine Engineering (DSME) has conducted a technical and commercial feasibility study of ships using ammonia fuel and analysed the competitiveness of GHG reduction of ammonia fuel compared to HFO (+scrubber) and LNG. The study showed that ammonia can be sufficiently competitive if the IMO’s emission regulation becomes stricter in the future.

DSME, one of the world’s largest shipyards, haas said it is looking at developing ammonia engineering technologies, such as ammonia supply systems and ammonia liquefaction systems, with the yard seeking to build a cooperation network with other companies related to ammonia fuelled ships.

Concluding, KR stated: “There is no fuel that is superior to any other fuels in every aspect, and each fuel has advantages and disadvantages.” To this end, the class society provided a useful table with the merits and disadvantages of the fuel options facing shipowners (see below).

“Ammonia is expected to have low production, storage, and transport costs compared to other carbon-neutral fuels, and the stable fuel supply is possible as the large-capacity ammonia synthesis technologies are already mature. It can be regarded as the carbon-neutral fuel for ships with the growth potential since it is expected to be at the allowable level technically and commercially from the storage temperature, energy density, and shipbuilding cost perspective,” KR stated.

Ammonia developments are happening fast in recent months. January saw Malaysia’s flagship carrier MISC along with Samsung Heavy Industries, Lloyd’s Register and MAN Energy Solutions set about building a landmark ammonia-fuelled tanker. Elsewhere, in a world-first, it was announced last month that Eidesvik’s 2003-built LNG-fuelled platform supply vessel Viking Energy will have a high-power fuel-cell installed to allow it to be powered by green ammonia.

At Marintec China in December a host of ammonia-fuelled box ship designs were unveiled while in October last year, Maersk, the world’s largest containerline, identified three fuels to focus on, namely alcohol, biogas and ammonia as it transitions towards complete decarbonisation by 2050. 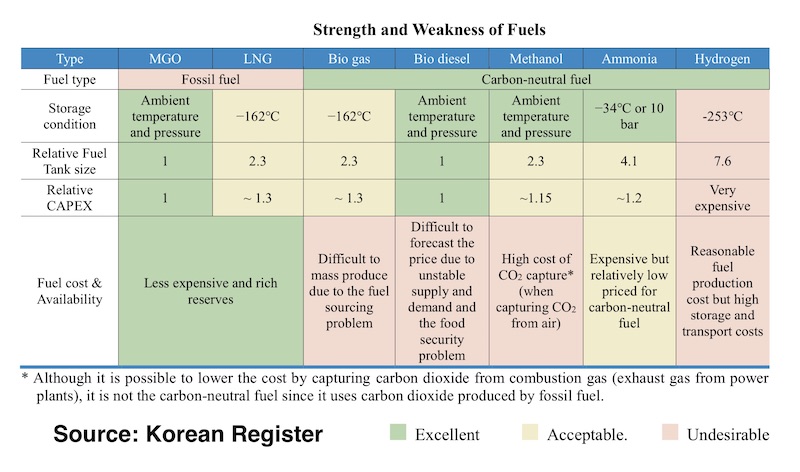