BIMCO’s chief shipping analyst Peter Sand has written an obituary for one of shipping’s most controversial ship types, the converted ore carrier.

“Converted very large ore carriers (VLOC) are increasingly becoming a thing of the past with the long-term freight contracts coming to an end as newer and more reliable ships replace them in the market,” Sand wrote in a new report yesterday, coming out in the same week that Brazilian miner Vale said it would stop using these vintage converted former tankers to move its cargoes.

Three out of five converted VLOCs are no longer operating, according to BIMCO analysis

Since June 2017, 43% of the VLOC fleet have been sent to the scrapyards, while 18% of the fleet is idled or damaged including eight lying idle in just one location, Labuan in Malaysia.

“The tragic Stellar Daisy accident brought the safety aspect of VLOCs into question. Now, three years on, three out of five VLOCs are no longer in operation as their long-term charters have now expired. Going forward, the obsolete VLOCs will be phased out of the market and replaced with technologically superior and more reliable ships,” Sand commented.

In the wake of the Stellar Daisy sinking in the south Atlantic with the loss of 22 lives a host of other defects were found on ageing converted ore carriers around the world.

VLOCs were converted from single-hull very large crude carriers (VLCC) in previous decades as an innovative result of the dry bulk super cycle and the IMO regulation which mandated that all single hull tankers should be phased out by 2010.

With cheap and obsolete tanker tonnage in the market, investors eyed an opportunity to convert the ships into VLOCs and deploy them on long-term contracts of affreightment, often with a duration of 10 years.

Many of the ships are approaching the average age of demolition, and these ships are set to be phased out as soon as the long-term contracts under which they are employed expire. However, new VLOCs and even larger ships, such as the valemaxes, have already been supplied to the market.

For this reason, BIMCO stated that the scrapping of converted VLOCs will not create a shortage of tonnage in the market to the disappointment of capesize owners everywhere.

“A shortage of tonnage will not arise because the converted VLOCs are now phased out. New and even larger ships have already been delivered to the dry bulk market, more than covering the transportation needs,” Sand maintained. 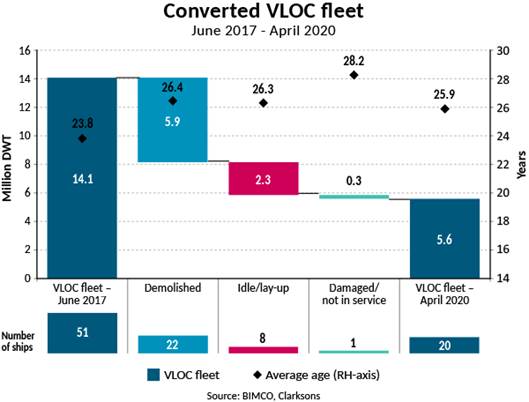