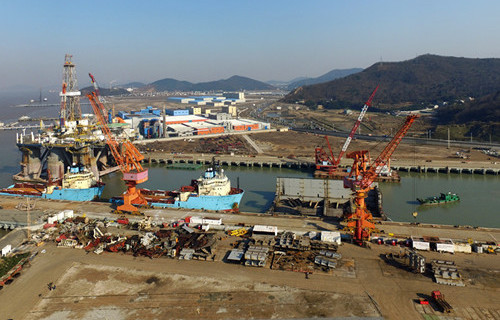 Calls are growing for Beijing to scrap its ban on importing ships for recycling. Effective January 1, China, the fourth largest shipbreaking nation in the world, has banned all foreign ships from coming to the Asian nation for recycling, one of many industrial measures on scrap products the Chinese government has taken in the past 18 months. China’s many scrapyards, among the most environmentally friendly in the world, are now having to rely on domestic tonnage for business.

“The ban will have enormous impact on the operations of shipbreaking yards in China,” Xie Dehua, director of the China National Shiprecycling Association (CNSA) told Splash, fresh from a trip to meet with peers in Bangladesh.

China announced the law change in April last year among a range of banned products in a bid to control environmental pollution in the country, once the world’s largest importer of waste materials.

“China’s shipbreaking industry will face turbulent years ahead,” Xie said, adding that many shipbreaking yards will need to transform their businesses to different sectors.

In the meantime, sources in the shipbreaking industry told Splash that the authorities are dealing with a new round of applications from shipbreaking yards on licenses for recycling domestic ships.

“Although Chinese breakers can not import foreign-flag demo vessels, they can still buy Chinese-flag demo vessels. So at this moment, they still have business to do,” said Ling Liu, a trader at cash buyer GMS.

Chinese recycling yards have led the world in dismantling ships in an environmentally friendly way, with ships being taken apart in dock rather than beached.

“The ban could close some of the best recycling facilities in the world that match the Hong Kong Convention and the EU ship recycling regulation requirements. Since the IMO started to discuss ship recycling regulations, a number of Chinese ship recycling facilities have upgraded and invested in their facilities enormously. This made these yards the first in the world to recycle ships at the highest standards available on health, safety and environment,” Bernard Veldhoven, secretary general of the International Ship Recycling Association (ISRA) said, adding that the ban could result in over 2.5m tons of high standard capacity taken out of the global market and can be seen as a major step back in the global development towards environmental and human safe ship recycling.

“I would welcome every support from ISRA and other bodies to the Chinese government to reconsider the ban,” Li said.

“It is still too early to say how many shipbreaking yards will go out of business, we are doing our best to support the yards,” CNSA’s Xie said.

According to Xie, CNSA is actively working with government authorities and shipbreaking yards to deal with the new issues during the implementation of the new ban and help the shipbreaking yards get through the difficulties by exploring new markets.