Just as capesizes had broken even for the first time this year, Brazilian miner Vale has delivered news that could depress rates.

Cape rates had been growing steadily in recent days, the 5TC route closing out the week at $9,875 per day with the Baltic Exchange noting the “push-pull” between the Atlantic and Pacific basins is now in motion, adding volatility and opportunity at above opex levels.

“Capesize bulk carriers are continuing the upswing witnessed throughout last week,” brokers Lorentzen & Stemoco noted in an update this morning.

The revival though has been hit by revised projections from Vale, the world’s largest iron ore producer, which on Friday cut its forecast for production of iron ore fines and pellets, copper and nickel for the full year, saying in a securities filing that the coronavirus outbreak was delaying some facilities from reopening.

Vale reduced its forecast for annual production of iron ore fines to 310m to 330m tonnes from 340m to 355m tonnes previously.

In the first quarter, Vale reported its iron ore output fell 18.2% from a year-ago to 59.6m tonnes.

The announcement from Brazil and its knock-on effect for cape owners was greeted with a mixed reaction from Peter Sand, BIMCO’s chief shipping analyst, who told Splash today that while it was still significant for independent capesize owners and operators, news like this hits less hard today than five years ago because 62 valemaxes transport an annual total of 100m tonnes to China, equal to 45% of the market for Brazil to China iron ore. In addition to that several VLOCs on long-term charter further reduces the market for spot operators.

“Production goes down, but exports will not be similarly impacted as stock pile drawdown will offset some of it,” Sand said while also pointing out that total Brazilian exports fell 10% last year, yet Brazilian exports to China have been steady at around 220m tonnes from 2017 through to the end of 2019. 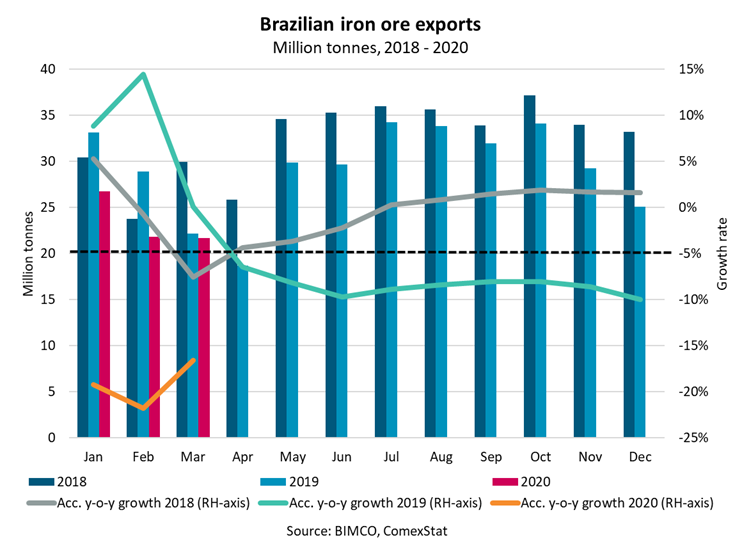