With utilisation rates dropping fast, container carriers are looking at soaking up some capacity and avoiding shelling out for toll fees by sending some of their ships from Asia to Europe via the Cape of Good Hope rather than the Suez Canal, Splash can exclusively reveal.

The Asia-Europe tradelane has seen a record drop in scheduled sailings in recent days as demand for goods dries up in Europe with the continent on a coronavirus lockdown.

Container vessel utilisation rates from Shanghai to north America and Europe were at 85% last week, down 10% from a week earlier, according to data from the Shanghai Shipping Exchange.

Liners have been working out how best to adjust their fleets on the back of the drastic drop in business with hot lay-ups also being considered and very noticeable swings in speed in recent days (see graph below).

Splash understands a number of carriers are looking at the logistics and maths of sending some ships the slow way around the continent of Africa to get to Europe, a decision made easier given the recent slump in the price of bunker fuel.

Liners could save millions per service on an annual basis by taking the Cape route to Europe, a journey that is around one week or 3,100 nautical miles longer than the traditional Suez Canal route.

“I would believe that the main driver would be the oil price to the Suez Canal fee differential, and if also soaks up capacity, then that’s just an add-on,” commented Alan Murphy, CEO of container shipping advisory, Sea-Intelligence. 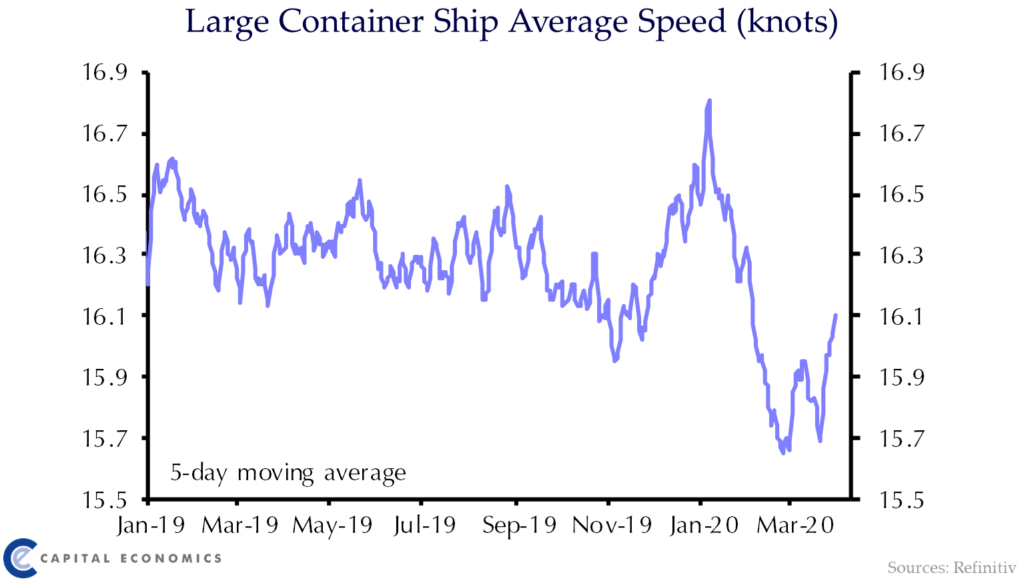