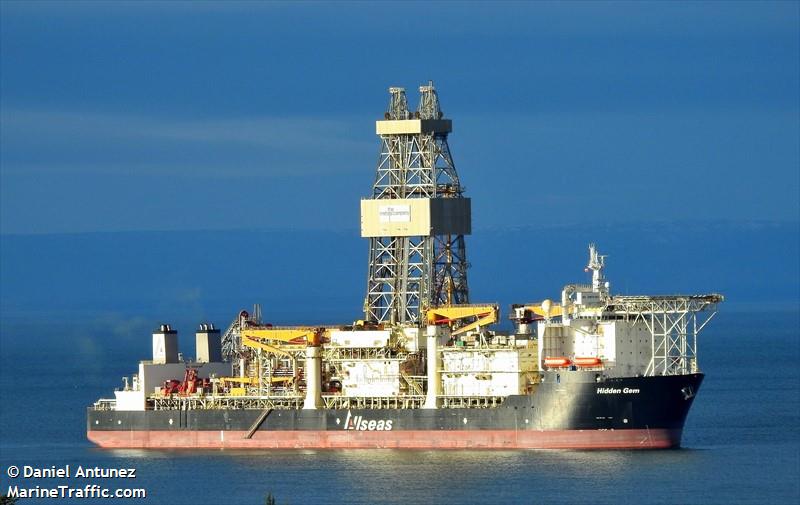 , a deepsea mining vessel, has had a very tough week in Rotterdam.

Strong winds on Sunday saw the giant drilling ship break free from its moorings and drift, alliding with the heavylift ship Black Marlin. No significant damages were reported.

Yesterday, the ship became the focus of a protest from Ocean Rebellion with some strong messages projected onto the ship’s hull (pictured).

Nasdaq-listed The Metals Company has been converting the 228 m long former drillship in Rotterdam over the past five months to become the first ship classified as a sub-sea mining vessel by the American Bureau of Shipping. TMC’s strategic partner Allseas acquired the former ultra-deepwater drillship, which can accommodate 200 people, in March 2020.

“Ocean Rebellion understands ‘RAPE’ is a terrible word, we do not use it lightly. We cannot think of a better word to describe what companies like The Metals Company will do to the sea bed. It is an act of plunder, a violent seizure, or abuse; despoliation; violation. It will tear apart unique environments for little gain, it is an act of pure greed. It is both physical and emotional abuse with no consent by the victim(s). There’s no justification for doing it, just like rape,” the organisers of the protest stated in a release, demanding an end to deepsea mining.

Stefanie Wels from Ocean Rebellion commented: “The deep sea is not a resource to be plundered at will by a few greedy companies. It’s a vital habitat we know little about. The UN International Seabed Authority must stop this insanity now, and start protecting the seabed for the benefit of all life, not for the benefit of its own funding model, nor for a group of greedy insiders.”

Writing for Splash last year, Marta Montojo and Ian Urbina from the non-profit Outlaw Ocean Project detailed the many risks of dredging minerals from the ocean floor.

“One worry among seabed mining critics is that the industry’s giant suction, grinding and harvesting machines will kick up huge and suffocating clouds of sediment both along the seabed and high in the water column that block light, crowd out oxygen, produce harmful amounts of noise pollution and disperse toxins which decimate life and contaminate seafood. Such contamination could also pose a threat to the food security for developing and coastal nations whose fishing stocks and other seafloor marine life would be decimated,” Montojo and Urbina wrote in a widely read article.

The Hidden Gem is expected to start operations in the Clarion Clipperton Zone (CCZ) off Nauru in the Pacific in the coming months.