Cosco has tabled a bid to take an initial 30% stake, rising to 49% in the future.

Russian authorities have tried and failed for a number of years to seek a way to get Sovcomflot to list. Last month top management at Russia’s largest line admitted that the latest IPO plans had been put on hold again. It is thought this failure to list frustrated Moscow authorities, ushering in Cosco’s bid.

An official from Cosco denied that the company intends to acquire Sovcomflot shares, while a spokesperson for the Russian line has yet to reply to questions sent by Splash earlier.

Mark Williams, managing director at recently formed consultancy Shipping Strategy, told Splash both parties were set to benefit from the rumoured deal. “Sovcomflot plans for listing to raise money for growth have been repeatedly postponed for economic and political reasons. As Russia-China cooperation develops, this investment stands to be a win-win for both sides. Sovcomflot’s LNG expertise may be of particular interest to Cosco.”

According to VesselsValue data, Sovcomflot currently operates a fleet of 102 vessels, made up of 79 tankers, nine LNG carriers, four LPG carriers and ten OSVs. The company also has seven newbuildings set to be delivered in 2019 and 2020. Were they to combine, Cosco and Sovcomflot would become the world’s largest tanker and LNG carrier company (see table below).

Russia is the largest supplier of crude to China, accounting for nearly 15% of China’s total crude oil imports in 2017, and with the opening this year of the Yamal LNG project, the world’s largest nation is also on track to export the most gas to China in the coming few years.

Sergey Frank, president of Sovcomflot said at the recent St Petersburg International Economic Forum that the Russian Arctic shipping route is providing China huge opportunities as China looks to use it to complete a major part of its maritime silk road. China has made much press in recent months about adding a polar link to its Belt and Road Initiative.

“The search seems to be over, competitively priced capital is found,” Sand told Splash today, adding: “While other tanker companies have engaged in more traditional sale and lease back arrangements to raise cash in order to stem the pressure of the terrible freight markets, this is much more far-reaching way of handling a stressful situation.”

Court Smith, an analyst at VesselsValue, told Splash today: “This gives Cosco a large stake in the aframax tanker markets, and signals continued seaborne movments of crude from Russia to China over the long term. Additionally, it could mean more LNG orders at Chinese yards if Sovcomflot expands its gas carrier fleet.” 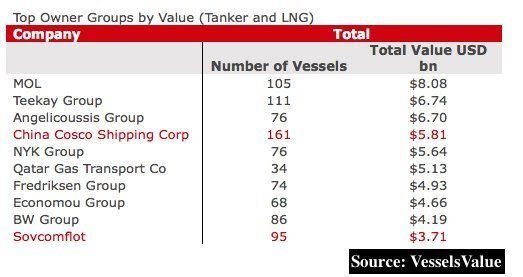