Cosco’s all out assault to become the world’s top containerline is yielding results. Analysts at Alphaliner report that Cosco, aided by the misfortune of a Danish rival, became the largest container carrier for the first time during the third quarter in terms of container liftings.

State-backed Cosco, which merged with China Shipping a couple of years ago, saw its liftings surge 23% to hit 5.49m teu in Q3, surpassing Maersk’s 5.26m teu. Maersk’s quarterly results were hit by a massive cyber attack this summer which hampered operations, volumes and revenues in a significant way. The Alphaliner report only looked at listed companies so MSC, the world’s second largest liner, was not analysed in the quarterly lifting assessment.

Cosco has made a $6.3bn bid for Hong Kong’s OOCL, a deal that is being assessed by regulators around the world. Senior management at Cosco have intimated to Splash that the eventual goal for the line is to overhaul Maersk into top spot in the liner rankings.

The Alphaliner reported carried a note of caution, pointing out that while carriers were lifting ever greater volumes of boxes, this was not translating into healthy returns.

“Carriers’ inability to drive rates upwards during the seasonally stronger third quarter despite robust demand growth and continued rate weakness in October and November is expected to weigh down the earnings performance in the fourth quarter of the year. The average CCFI index has already fallen by 7.4% in the fourth quarter against the third quarter, with further falls expected in the coming weeks,” Alphaliner warned in its latest weekly report. 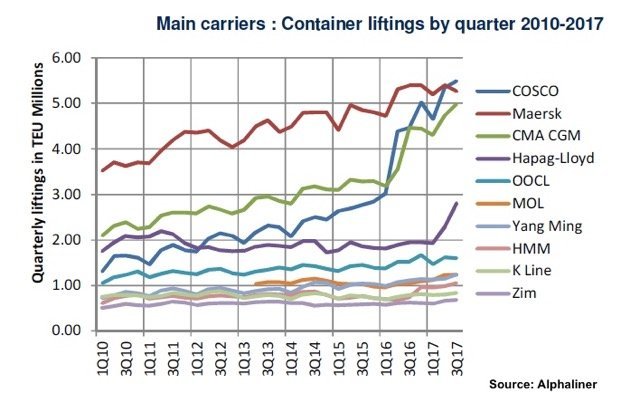