Denmark has revealed details of how the nation’s government and its shipping community intend to deploy climate diplomacy to slash world shipping’s carbon footprint.

Danish Shipping, the country’s shipowning organisation, was invited to join a so-called Climate Partnership for Blue Denmark by the government last autumn.

The report was finalised in March this year but due to coronavirus, it has not been published and discussed until now.

A number of other organisations have been involved in the work including Danish Ports, Danish Maritime and the two fisheries associations. The work has been co-chaired by Maersk CEO Søren Skou, Bjarne Foldager, the CEO of Man Energy Solutions and Carsten Jensen, the CEO of local ferry company Molslinien.

The back drop of the government initiative – which comprises all together 13 climate partnerships with different sectors in the Danish economy – is the Danish political ambition of reducing CO2 emissions in Denmark by 70% by 2030 and to be a global leader in finding ways towards a carbon neutral future.

The report, seen by Splash, states: “The business case for climate-friendly shipping must be strengthened by incorporating climate considerations into commercial activities, in order to incentivize the use of climate-friendly technologies.”

The participants in the report have stressed that the coronavirus impact will not reduce their focus on delivering green shipping results.

The Climate Partnership for Blue Denmark has developed six initiatives, which the members of the partnership are ready to invest in under the current conditions. In addition, the Climate Partnership has put forward fifteen recommendations for government action. The initiatives and recommendations are divided into four overall themes that address the barriers and opportunities for a climate-neutral shipping industry including a raft of initiatives bracketed as climate diplomacy (see image at the bottom of this report for the full plan – both nationally and internationally).

“Together, these themes show how Denmark can support a sustainable transition of the shipping industry on both a national and global level,” the report states.

Commenting on the report, Anne Steffensen, the CEO of Danish Shipping, told Splash today: “The Danish government has given Blue Denmark a clear task: Bring ideas and proposals to the table in order for the government and the industry to work together. We see this as an opportunity to propose initiatives in the short run, in the longer run and finally to strengthen the voice of Denmark at the international level.”

Steffensen said the transition shipping is facing in order to become climate neutral by 2050 will entail collaboration and new pathways both in terms of fuel, technology, energy infrastructure as well as regulatory frame work.

“The partnership between Blue Denmark and the Danish government can give Denmark a leading position in this vital transition for shipping,” the shipowner boss said today. 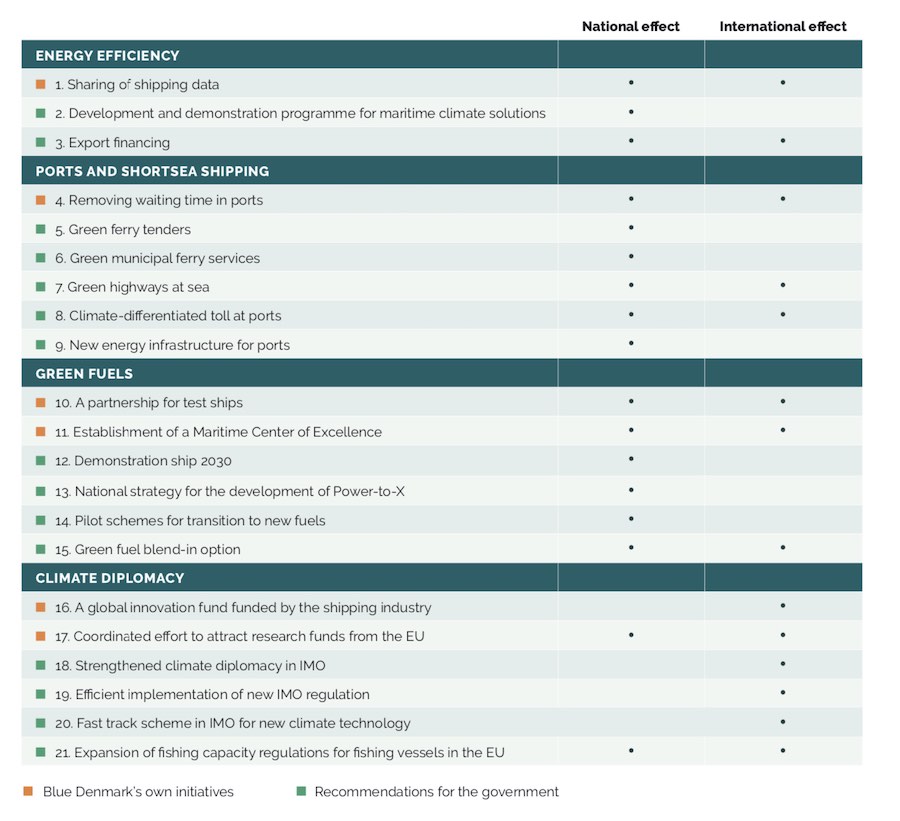