China’s dominance in leading world trade is set to slow in the years ahead with other regions picking up the slack, according to a major new report from German logistics giant DHL, a publication with sizeable ramifications for the global seaborne map.

DHL’s Trade Growth Atlas report published this month predicts China’s share of global trade growth will be slashed in half between 2021 and 2026, to 13%, with neighbours in Southeast Asia being among the main beneficiaries.

Between 2016 and 2021, China ranked top with the fastest growth in both exports and imports. However, between 2021 and 2026, Asean countries are predicted to overtake the People’s Republic, followed by South and Central Asia and Sub-Saharan Africa.

The report stated: “New poles of trade growth are emerging in South-east and South Asia and trade growth is forecast to accelerate dramatically in Sub-Saharan Africa. After decades of shifts to the east, the centre of gravity of world trade is poised for a turn south.”

The DHL report has created much discussion among analysts and trade experts, given its potential changes for the future of the seaborne trading map.

Few industries are so beholden to one country for its fortunes as shipping is with China. Whether it’s oil, iron ore, LNG, or containers – and plenty more besides – China dominates seaborne trades, and has done throughout the 21st century, following its accession to the World Trade Organization.

According to World Bank figures, China represented just 9.4% of global manufacturing capacity in 2005 with the US and Japan being number one and two at 21.8% and 13.5% respectively. By 2020, China had propelled itself to the top spot with 28.5%.

“The future geography of trade will be impacted by a range of impending shifts, including the geopolitical landscape, the energy transition, and trends and changes in maritime logistics,” commented Jan Hoffmann, head of the trade logistics branch at the United Nations Conference on Trade and Development (UNCTAD), warning: “If lower shipping costs lead to more trade, higher shipping costs should lead to less trade.”

“The developments we have seen – especially in 2022 – are leading to a situation where companies over the next five years to some degree will be shifting production out of China – most likely to other locations across Asia,” said Lars Jensen, CEO of liner consultancy Vespucci Maritime.

Peter Sand, chief analyst at container freight rate platform Xeneta, said that more investments are being made primarily in Asia outside of China as manufacturers and shippers seek to build more resilient supply chains.

“In the 2000s it was 100% of globalisation that involved China, during the 2010s it was two-thirds, and going forward, well the geopolitics are stacked against China,” Sand said, picking out a host of countries including Vietnam, Thailand, Portugal, and Turkey as winners from this move away from China.

Moreover, Sand argued that containerlines have prepared for this transition with the current orderbook heavily in favour of ships in the 12,000 to 17,000 teu range, capacity better suited to the likes of Southeast Asia.

On dry bulk, citing data from Oceanbolt, Mark Williams, who heads up UK consultancy Shipping Strategy, said China’s share of the bulk carrier trade has been holding up “fairly well” in recent years. Oceanbolt data shows China’s dry bulk share has hovered between 35 and 42% between 2015 and 2022.

“Yes, there is some decoupling already happening or else China would not be complaining about it. It would be a good thing for shipping to be less dependent on China,” Williams said.

Not everyone is willing to accept DHL’s thesis that China’s growth will remain so muted in the coming years.

According to the Global Trade Analytics Suite (GTAS) created S&P Global Market Intelligence, for the 2016-2021 period, by export value, mainland China accounted for about 13% of the global trade on average, with a compound annual growth rate (CAGR) of 5.9%.

For the period 2021–2026, its exports are forecast by GTAS to grow 4.3% CAGR in terms of value. Mainland China’s share in global trade is forecast to remain over 15% throughout the period, according to GTAS.

For the same period, countries in Central, Southeastern and southern Asia are forecast to account for up to 0.4%, 8.4% and 2.8% respectively. Middle and East Africa will likely make up about 0.5-0.6% in the global trade, GTAS maintains.

Eric Robertsen, global head of research and chief strategist at Standard Chartered, said at this week’s Marine Money event in Singapore that this year was too premature for a China rebound.

“China will recover but it will come later and will be more protracted from what we are used to,” Robertsen said. The Standard Chartered analyst reckoned that almost all of China’s current economic problems such as real estate and diminishing consumer appetite could be seen in a positive light for the shipping market.

“Over the last 10 years, China has been saying they want to be a more consumer-based economy. Well, guess what? They’ll be going back to more old-fashioned infrastructure spend as economic levers,” Robertsen suggested.

Tankers: the crack is mighty

End of the season for bulk carriers?

Tankers: the crack is mighty

End of the season for bulk carriers? 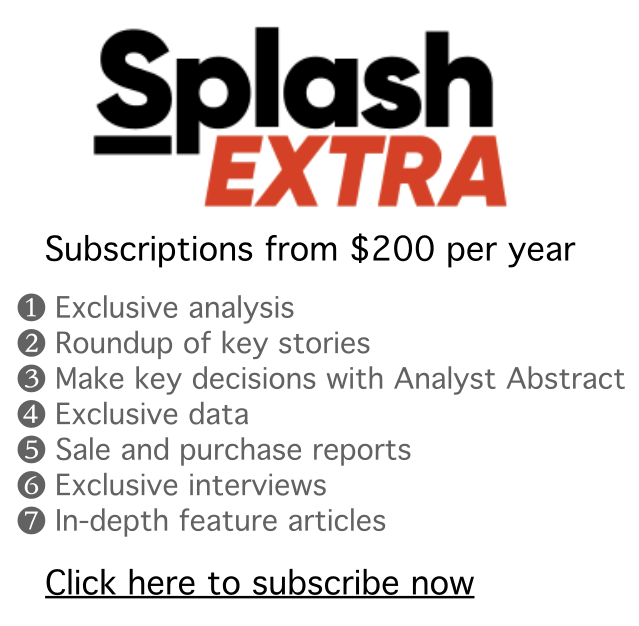