Macroeconomic uncertainty, diminishing demand and excess fleet capacity will bring down freight rates for MR chemical tankers over the medium term, according to research by Drewry.

“We expect freight rates and timecharter rates for coated MR chemical tankers to continue to drop over the next few years. For anyone contemplating investment in shipping, MR chemical tankers could be one of the most unattractive sectors today,” Hu Qing, Drewry’s lead analyst for chemical shipping, said in a release.

The shipping consultancy expects chemical tanker freight rates to remain weak in the third quarter while China shuts its chemical plants during the G20 summit in late August to early September. A rebound is forecast for the final quarter of the year.

Earnings and rates of MR tankers with IMO II notation have been better than those of smaller chemical tankers that are not able to cross-trade in the clean petroleum products (CPP) market. Drewry expects a “modest improvement” in CPP markets during the next two quarters.

However, the consultancy says chartering activity for the larger vessels is “cooling off” and may be further impacted by weakening demand.

The fallout of the UK’s decision to leave the European Union has created uncertainty within the European petrochemical industry that may reduce demand for feedstock on the continent, Drewry says.

Reduced demand is also expected from China, which has a plentiful domestic supply of CPP, and from South America, which is expected to reduce its vegoil exports going into 2017.

Meanwhile, the existing fleet of 1,085 MR chemical tankers continues to grow. Drewry expects another 100 newbuildings to hit the water by 2017, which will further pressure rates. 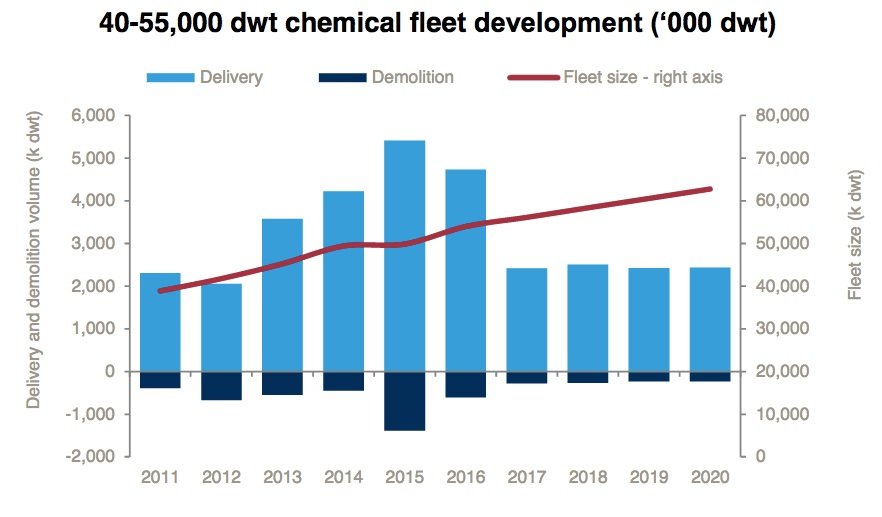