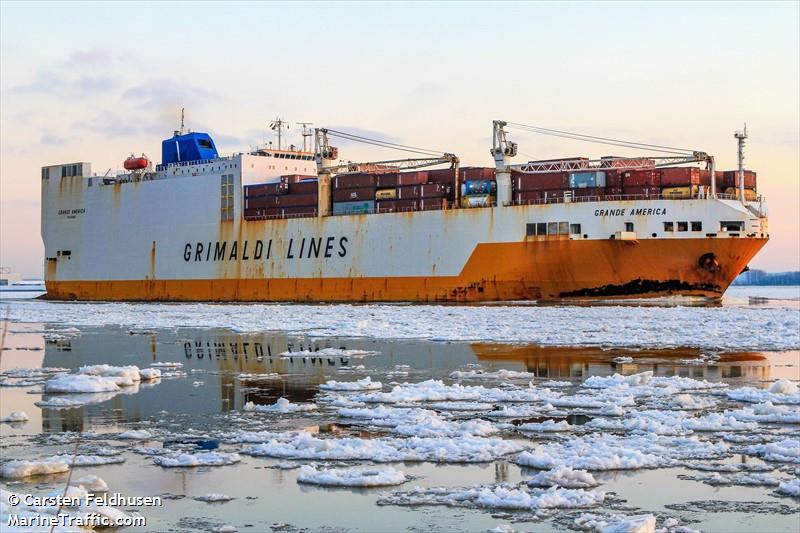 caught fire off the western coast of France while sailing from Hamburg to Casablanca in Morocco late on March 10.

A frigate from the British Royal Navy and a French rescue ship came to the Italian ship’s rescue soon after it caught fire and all the 27 people onboard were taken to the French port of Brest.

“The crew of HMS Argyll spent eight hours saving every soul aboard the Grande America in the Bay of Biscay after the ship’s cargo of containers and cars caught fire. The frigate responded to a mayday during the night from the 28,000-tonne merchant ship about 150 miles southwest of Brest: the crew were fighting a losing battle against the flames and were abandoning ship,” the Royal Navy said. “The conditions were horrendous, the vessels were rolling at 30 degrees which made it extremely hairy getting the sailors safely on board.”

A statement from the Naples-based Grimaldi Group reported that its 1997-built vessel “experienced a fire in one of the containers loaded on the weather deck during the night of March 10th and 11th, which spread to other containers positioned close by. The vessel was en route from Hamburg to Casablanca, when the incident occurred about 150 nautical miles off Brest. After an attempt from the crew to extinguish the fire, at around 02:30 a.m., the Master decided that the crew should leave the vessel by life boat, as it was considered that the winds may well spread the fire further.”

French authorities also dispatched a Falcon 50 maritime surveillance plane and, together with Grimaldi, the fire fighting tug vessel Abeille Bourbon which is presently trying to extinguish the fire onboard. It is expected that once the fire is extinguished, the Grande America will be towed to a suitable port.