French container analysts Alphaliner report the Ocean 3 alliance is likely to be ripped apart. CMA CGM is in discussions with the merged Cosco/China Shipping entity to form an alliance that could also include OOCL and Evergreen. The new alliance would leave Middle Eastern boxline UASC out in the cold.

With CMA CGM likely taking soon-to-be acquired APL to the new alliance, the G6 alliance, where OOCL is currently, would also be decimated. Cosco and Evergreen departing the CKYHE alliance would also put that container partnership under severe pressure, leading some to speculate that its remnants, K Line, Yang Ming and Hanjin could seek an alliance with the rump of the G6 next year.

No carrier contacted by Splash responded to the alliance speculation apart from OOCL. The Hong Kong liner said in a statement last week: “While there has been rumor and speculations in the news about the future alliance landscape and on individual carrier activities, we are in no position to comment on them. As announced in a G6 Alliance press release dated December 11, 2015, the current service structure of the G6 Alliance will remain stable and expect to operate as aligned through 2016.”

“If successful, the initiative would radically alter the current liner shipping landscape and leave the eight remaining carriers of the Ocean Three, CKYHE and G6 alliances in the lurch,” Alphaliner commented in its weekly report. 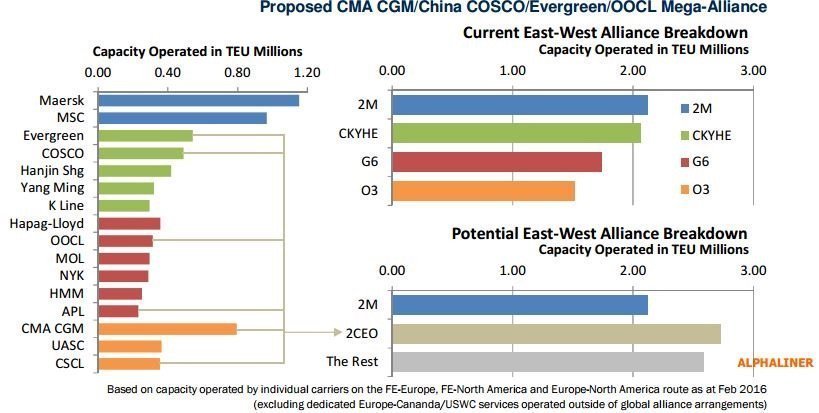