Developments are coming in thick and fast in the chaotic days following container shipping’s largest ever bankruptcy. Hanjin Shipping, which sought court receivership on Wednesday, saddled by more than $5bn in debts, has had its bankruptcy application approved by a judge in Seoul. Top brass at the Korean line now have until November 25 to come up with a survival plan to present to the court to avoid liquidation. The Korea Exchange has said Hanjin Shipping’s shares will resume trading on Monday.

Meanwhile, Hanjin’s partners in the CKYHE alliance have suspended the Korean firm’s membership in the group. The alliance, which is set to run until the end of March next year, also includes Cosco, K Line, Yang Ming and Evergreen.

As well as CKYHE, all other containerlines who have services with Hanjin have issued notices to clients telling them these services have been cancelled.

Sources at Hanjin Shipping tell Splash that now the legal protection has been initiated in Seoul its ships will start moving again. 45 of its ships, including 41 boxships, have been stranded at sea since Wednesday, some being denied port entries, others staying in international waters to avoid being arrested. At least one ship, the Hanjin Rome , has been arrested – and plenty more lawsuits are flooding in.

Regarding existing shipments on Hanjin boxships around the world, Belgian law firm Van Laer Van Mechelen Advocaten has warned shippers are in for a painful, expensive time if they wish to get their goods to market.

“Taken into consideration their alleged right of retention / pledge, several terminal operators have stated that containers could be released under the condition of payment of a proportional part of the outstandings. Depending on the terminal operator and their claim towards Hanjin, such payment could consist of amounts up to EUR2,000 to EUR2,500 per container,” the law firm said in a report yesterday.

Hyundai Merchant Marine (HMM), is deploying 13 ships on Hanjin Shipping-operated routes to the US and Europe to help pick up the slack from Hanjin’s demise. HMM has been tipped to also pick up some of its rival’s assets in the coming months.

The chaos caused by Hanjin’s bankruptcy saw spot container freight rates on the major routes from Asia soar by up to 42% yesterday according to the World Container Index (WCI) as shippers scrambled to get their peak season plans back in order.

“Unpredictable freight rates are not new phenomenon in the container industry, however a major upheaval of supply like this is likely to cause extreme short-term price volatility. Shippers should expect increasing freight costs and tight allocation for several weeks at least,” said Richard Heath, general manager of WCI.

Splash will be providing continued updates on the Hanjin upheaval. To view our full archive on container shipping’s largest ever bankruptcy, click here. 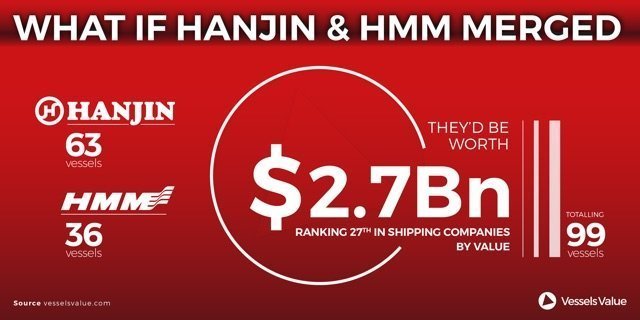