More Hanjin ships have been put up for sale. Citing shipbroking sources, Reuters is reporting that the Hanjin Mar and the Hanjin Marine, both 4,500 teu boxships, are up for sale with offers sought by the end of this month. Hanjin is expected to book around $40m from the sale of the pair. It has already banked $45m from its current and immediate past chairmen in emergency aid, but analysts say the company will still need hundreds of millions of dollars more if it is to survive.

Many more ships linked to Hanjin are expected to be put in the shop window soon. South Korea’s financial watchdog has intimated compatriot line Hyundai Merchant Marine (HMM) could take a number of Hanjin assets in the coming weeks and months. HMM, itself recently out of a painful restructuring, is hoping to join the 2M alliance network – the vessel sharing agreement between Maersk and MSC. It signed an MoU with the two giant lines to join 2M in July. However, HMM officials will have reacted with unease at comments made by MSC svp Caroline Becquart at a JOC organised conference in Hamburg today, who warned that the Korean joining 2M was by no means fixed and further negotiations will be necessary. Maersk and MSC reacted fastest to snare some of the capacity on the transpacific that used to be controlled by Hanjin with two new services launching tomorrow.

Separately, Indonesia’s Samudera Shipping Line, which has existing slot exchange arrangements with Hanjin, said in a stock exchange announcement today its exposure to the bust line will likely hit the company’s bottom line by up to $3m.

In Italy, the Korean carrier’s demise is seeing a number of redundancies. Hanjin Italy, a 50:50 joint venture between Italy’s Gastaldi Group and Hanjin Shipping, will be put into liquidation. The board of directors of the Genoa-based shipping agency yesterday night decided to close the company.
Labour unions in Genoa confirmed to Splash: “Hanjin Italy will cease operations very soon and 92 workers based in Genoa and in Milan will be axed”.

Hanjin Italy was a long-standing partnership between the South Korean shipping company and Italy’s Gastaldi Group active in the field of shipping agency, port terminals, freight forwarding and logistics.

Shipping executives the world over continue to digest the impact of Hanjin’s fall. Bill Smart, who heads up intra-Asia line, Bengal Tiger Line, told Splash today: “This is a fundamental changer in container shipping from which we must all take the opportunity to resolve the over capacity situation and resultant untenable freighting levels.”

“It’s not as if there isn’t enough capacity to pick up the slack – that’s why we have the problem in the first place,” Huxley said, before conceding: “It’s another case of assessing counterparty risk and also will this prompt banks to be even more cautious on shipping, which will have an impact.”

A live track carried by MarineTraffic of all Hanjin Shipping vessels (pictured below) shows an increasing accumulation of the ships off Busan in the south of South Korea today in safe waters away from countless parties looking to arrest its ships. 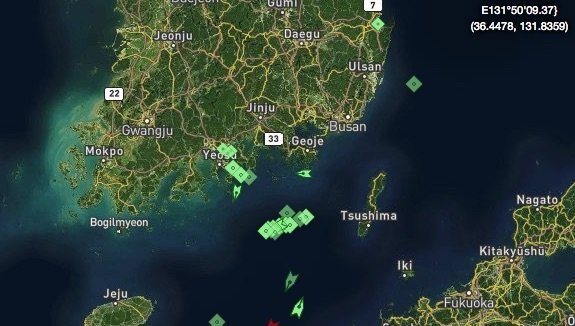 With additional reporting from Nicola Capuzzo.