Splash has been given exclusive access by BigOceanData to its proprietary system allowing readers to see where all Hanjin Shipping vessels are around the world. The access shows that most previously stranded ships in international waters are now moving again, with many heading towards South Korea. Readers can find full details of all the ships by clicking here. 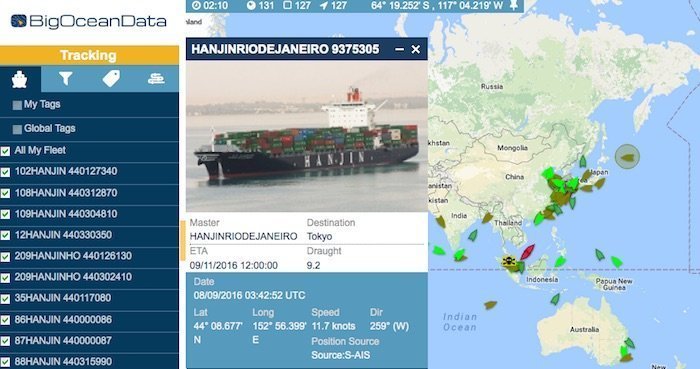 “Vessels that are within the region without fear of being arrested – such as Korea, the US, Japan and the UK, cargoes are to be discharged at ports,” a source at Hanjin Shipping told Splash today.

Separately, Splash can reveal that Hanjin Shipping’s China network has come to a complete halt. All China offices of the Korean line are not working at the moment with Splash redirected to Seoul headquarters. There have been earlier reports of knife wielding angry customers and contractors trying to attack workers at Hanjin’s Tianjin office. Other violence has been aimed at Hanjin workers around the world, with one report suggesting a number of employees in India sought protection at a consulate.

In another hammer blow to the beleaguered line, which sought court protection eight days ago its main creditor, Korea Development Bank (KDB) has refused a court request to hand over further financial support. KDB has shied away from the request fearful it would not be able to recoup the money.

Earlier this week, parent Hanjin Group promised to pump KRW100bn ($91m) to the line to help it offload cargo around the world, a figure that was originally going to be matched by the state, something authorities have since decided against.

More Hanjin ships have been seized around the world. Two fuel suppliers teamed up to lay a claim on the 4,253 teu Hanjin Montevideo which has been arrested at Long Beach.

Meanwhile, irate shippers around the world have slammed ports for trying to cash in on Hanjin’s demise. Ports in the US, for instance, are trying to squeeze shippers for as much as $4,200 per container, while terminal operators in Hong Kong are charging shippers an additional fee of $1,260 to release each Hanjin container. Other ports in Europe and Asia are also demanding four-digit dollar figures if shippers want to get their boxes released. In Shanghai, the world’s largest container port, authorities are refusing to unload Hanjin boxes, shippers tell Splash, until the Korean line pays all its existing debts owed to the port, causing major supply chain headaches for many shippers.

Trying desperately to solve the crisis, with an estimated $14bn of cargoes on Hanjin ships around the world, the South Korean government has announced plans to deploy more than 20 containerships from next week as substitutes for Hanjin Shipping vessels.

Splash has been leading the way with coverage of the decline and fall of Hanjin Shipping – for our full archive on 2016’s biggest maritime story, click here.