Harry Sangree, the founder of SeaFreight Labs, commends readers to pick up a copy of Jon Gertner’s book on Bell Labs for inspiration on the path towards decarbonisation. 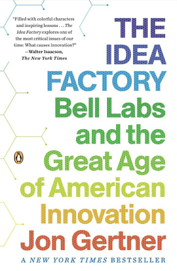 The Idea Factory – Bell Labs and the Great Age of American Innovation by Jon Gertner (published in 2012; 361 pages) is the story of the tremendous flood of communications and technology innovation that came out of Bell Labs from the 1930s through the 1980s. This single organisation was the inventor and/or primary developer of foundations of contemporary life including transistors, microwave towers, communications satellites, digital transmission, optical fiber and cellular telephone systems. Each of these technologies are individually revolutionary; collectively they played a major role in creating today’s computer- and communications-dependent world.

Bell Labs was one of the triad of companies operating in a US government authorised communications monopoly: AT&T, Western Electric and Bell Labs. AT&T was the customer-facing provider of US local and long-distance phone service. Western Electric was the captive manufacturing group for the entity. And Bell Labs was responsible for research and development of communications technologies with the general objective of “better, cheaper or both”.

Over the 50 years of the book’s focus, tens of thousands of people worked at Bell Labs. However, Gertner focuses on just a handful of the key management and technical staff that were directly involved in the ideation, invention, development and eventual adoption of the major Bell Labs innovations. Relying on detailed lab notebooks and other primary sources, the book describes in precise detail how the world’s first and most prolific ‘industrial lab’ worked.

Bell Labs was a unique place during its glory years because of its business model. The open-ended mission to ‘improve communications’ and stable, generous funding made possible by the monopoly positioning of AT&T drove the organisation’s people and process strategies. Bell Labs could recruit the ‘best and brightest’ from multiple fields in fundamental science and applied science and allow them to cross-pollinate ideas and inventions. These brilliant scientists and engineers collectively invented the great communications and technology innovations of the post-war years.

This environment continued until 1984 when the local phone companies were separated from an AT&T that then consisted of long-distance, Western Electric and Bell Labs. Losing the revenue stream provided by the spun-out divisions and losing the guaranteed market for new innovations changed the environment enough so that Bell Labs now specialises in incremental innovation rather than revolutionary inventions. Its storied history was unique in its day and is likely never to be replicated in the communications industry in the future.

1. Revolutionary innovation follows a structured process. The senior management at Bell Labs during this period believed they had discovered an ‘innovation process’ that was repeatable. It began with an ‘idea’, usually birthed by a single individual. Next was a ‘discovery’, which was made by the original individual or a small team. This led to an ‘invention’, also made by a small team. The next step was to apply a large team to the project and to create a ‘product’ that could be manufactured at scale. If all went well, the last step was ‘market adoption’ which involved the whole company and countless parties outside of the company.

As the seafreight industry looks for a way to decarbonise by 2050, it is easy to become discouraged by the difficulty of the task. However, the Bell Labs experience makes clear that it is truly possible to create an environment that can invent a solution to an unsolvable problem. We need leadership that actively solicits ‘ideas’ and ‘discoveries’ and is willing to make multiple parallel investments to push the projects forward to see if they can be developed to become a ‘product’ that helps the decarbonisation vision.

2. Proper team-design nurtures innovation. Bell Labs invented and commercialised groundbreaking technology during this period because of its intentional staffing designs. Each successful project had an interdisciplinary mix of theoretical people, experimental people and people who knew how to build things. This mix of backgrounds was vital to creating the environment for creativity.

Each project also had three types of people: geniuses, instigators, and managers. The geniuses were in place because they were aggressively recruited to the staff of Bell Labs. The instigators were in effect technical coaches. They steered technical work in a direction that would eventually yield positive results. And the managers were trained to be able to wrest excellence out of people who might otherwise fall short.

As sea freight tries to solve the problem of decarbonisation, we can improve our odds for success by creating project teams that leverage the successful experiences of Bell Labs.

This proposal duplicates two Bell Labs strategies that Gertner credits with the amazing creativity of Bell Labs: total industry support and long-term financial commitment. Because of the AT&T phone monopoly in the US, Bell Labs was, in effect, the R&D lab for the entire US communications industry. IMO and UN backing of the IMRB would position the new R&D organisation in the same position for ocean shipping. This would allow all innovations to flow directly to the market and gain rapid and widespread adoption – a critical contributor to the success of Bell Labs.

Planning time horizons at Bell Labs could be multi-year or even as long as a decade because management was certain that financial resources would be available to pursue promising ideas and discoveries. The IMRF funding proposal would set up a similar dynamic at the IMRB. This would encourage the pursuit of revolutionary as well as incremental R&D and is the most likely management strategy to yield the desired results.