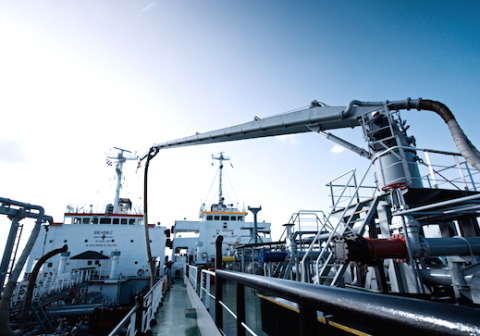 Ahead of the International Maritime Organization’s (IMO) decision on the timing of the global 0.50% sulphur cap for marine fuels, the International Bunker Industry Association (IBIA) is advising its members on the potential impact of the shift. IBIA, whose members include marine fuel buyers, suppliers and traders, is concerned that global refining and shipping will struggle to cope, and has outlined a series of options that it believes could facilitate a smoother transition to a lower sulphur cap.

The Marine Environment Protection Committee (MEPC) of the IMO is expected to decide on the timing of the global 0.50% cap in October this year, based on the result of a low sulphur fuel availability study required under MARPOL Annex VI.

Commenting on the survey, IBIA chief executive Peter Hall said: “Regardless of whether the global 0.50% sulphur limit takes effect in 2020 or 2025, the change from the current 3.50% to a 0.50% sulphur limit is a seismic shift on an unprecedented scale in the history of refining and shipping. It seems unrealistic to expect to successfully achieve a shift of this magnitude overnight. Today we are asking our members whether or not they want the association to bring the issues associated with the transition to a global 0.50% sulphur limit, and potential mitigation strategies, to the attention of the IMO’s Marine Environment Protection Committee.”

IBIA believes that implementation of the global 0.50% sulphur limit in 2020 outside designated emission control areas (ECAs) where the fuel sulphur limit is 0.10% would likely be more challenging than 2025 from an overall supply/demand balance standpoint, but a delay to 2025 would nevertheless bring a number of transitional challenges.

Refineries are already increasing output of distillates to address rising inland demand, resulting in a reduction of residual fuel oil, or heavy fuel oil (HFO) production, but this is a linear, gradual process. Assuming that the capacity exists globally to produce sufficient marine fuels meeting a 0.50% sulphur limit, IBIA believes that there would likely be regional and/or local disparities with some ports facing shortfalls.

An abrupt change on the scale required for global shipping to shift from mainly high sulphur HFO to low sulphur products is an enormous logistical undertaking not just for refiners, but also other links in the supply infrastructure.

Some may argue that there is no issue as evidenced by how well the industry coped with the 2015 change from 1.00% to 0.10% sulphur fuel in ECAs, which was a shift from mainly HFO to mainly marine gas oil (MGO). However, the additional annual volumes involved were limited to no more than approximately 40m tonnes of global distillate demand per annum and applied to limited geographical areas. The 0.50% sulphur cap would require an additional annual volume of around 210m tonnes globally. According to the International Energy Agency, the difference between the ECA change in 2015 and the global 0.50% cap would be even more dramatic. It advises the 0.10% ECA sulphur limit caused 0.1m b/d to shift from residual fuel oil to gasoil, while a global cap in 2020 would lead to a 2m b/d shift from HFO to MGO.

The refining industry, and the market, is able to absorb incremental annual demand growth for distillates, but an abrupt major increase like the one associated with a global shift to 0.50% sulphur fuels for shipping will very likely to cause a period of supply shortages in some regions, IBIA believes, which in turn would have an impact on distillate product prices globally. A distillate shortage and hence price inflation in one sector, like shipping, could impact inland markets such as road transport fuels and heating oil.

Some may again argue that the anticipated price increase in MGO when the ECA sulphur limit dropped to 0.10% in 2015 did not materialise. This was, IBIA contends, a result of a sharp fall in global oil prices in the run-up to 2015. The price difference between MGO and HFO did, in fact, increase in relative terms from a 50-60% premium to 100% or more, and there is no guarantee that the introduction of the global cap will coincide with a similar period of low oil prices.

Uptake of abatement technology such as scrubbers is expected to allow a portion of the world fleet to continue to use HFO with higher sulphur content both in ECAs and globally. However, if suppliers expect the demand for HFO to shrink dramatically, it could become a niche market with fewer suppliers willing to offer it, and there is a risk that supply of HFO will begin to disappear just as more ships are installing scrubbers.

In short, IBIA said in a release that trying to implement a global shift from the 3.50% sulphur limit to 0.50% overnight is likely to lead to a period of significant disruption and market distortion.

In light of this, IBIA has outlined a range of options to facilitate a smoother transition that may be considered on their own, or in combination.

Further information is available on the IBIA website via this link.