The sudden massive volume of blanked sailings announced in recent days is set to create new records in terms of the inactive containership fleet, which analysts at Alphaliner are now saying will breach the 3m teu mark for the first time meaning some 13% of the entire global box fleet will be out of work.

The inactive containership fleet had actually been dropping for most of the last month having hit a record of 2.46m teu at the start of March.

The fall was largely due to the resumption of sailings that were blanked during the extended Chinese holidays in February.

This is all changing fast however with liners nixing sailings across the world as coronavirus lockdowns keep consumers at home.

Alphaliner reported in its latest weekly report that more than 250 scheduled sailings will be withdrawn in the second quarter alone.

Up to 30% of total capacity is being removed from some of the most badly affected routes.

“No market segment will be spared, with capacity cuts announced across almost all key routes,” Alphaliner warned, adding: “While the larger ships will be cascaded to replace smaller units on the remaining strings, carriers will be forced to idle a large part of their operated tonnage. This will affect all size segments in the coming weeks.”

In an ongoing poll carried on this site, a majority Splash readers believe shipping will suffer a record number of layups in the coming 18 months and readers have singled out the container shipping sector as the shipping segment likely to be most hard hit from the fallout brought about by the coronavirus contagion.

Earlier this week, Rodolphe Saadé, the CEO of CMA CGM, the world’s fourth largest containerline, told Le Figaro newspaper in France that he was anticipating May will be the slowest month for box movements across the globe thanks to the coronavirus.

Container vessel utilisation rates are beginning to slide however freight rates are stable, on a par with this time last year.

“High air rates have some shippers looking to switch to ocean shipping. This shift, along with carriers continuing to blank large numbers of sailings for the coming weeks as demand slumps, have kept ocean rates stable this week, with China-US West Coast rates even climbing by 5% to $1,604,” container booking platform Freightos noted in an update yesterday.

Sea-Intelligence warned that a failure to prevent a simultaneous rate collapse could lead to the liner industry losing a “staggering” $23.4bn in 2020. 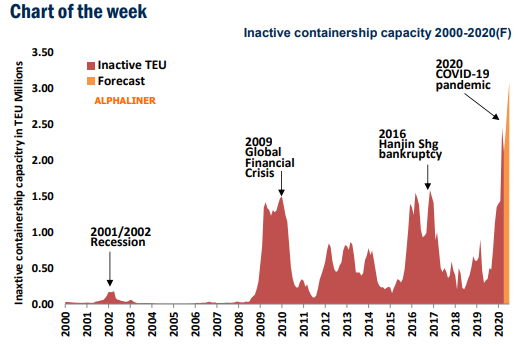