The International Transport Forum (ITF), which works under the auspices of the Organisation for Economic Co-operation and Development (OECD) in Paris, is set to lock horns with the liner community once again, issuing a 10-page report yesterday cautioning governments from rushing to bail out debt-laden carriers in the coming months.

The cumulated debt of 14 major container carriers had reached $95bn by the third quarter of last year, a figure that stood at $76bn in 2010, according to data carried in the report.

The high debt level of container carriers creates insolvency risks, the report pointed out, citing reports carried by Splash earlier this year on the so-called Altman-Z rankings, a bankruptcy barometer. “Any bailouts for the sector should address offloading of risks to the public,” the ITF report urged.

The current oversupply of vessels could become even more problematic, the think tank warned. Containership supply is set to increase 5% in 2020 and 3% in 2021, based on the current ship orderbook. Demand for container freight, however, could fall by 10% to 30%. If global container trade volumes were to contract by 11% in 2020, in line with International Monetary Fund (IMF) projections of an 11% contraction of global trade, even an all-time high containership idling rate of 15% would not be able to bridge the gap with the reduction of demand, ITF pointed out. As it is, idling is entering record 13% territory with May set to worsen the situation.

Over the past decade, carriers mitigated excess capacity by lowering ship speeds, scrapping older vessels and cancelling orders for new ships. Carriers will likely resort to a mix of similar instruments in the second and third quarter of 2020, ITF suggested.

Returning to a familiar bugbear of the ITF’s, namely the nature of container alliances, the report stated: “Reduced demand has so far not translated into lower prices for customers of container shipping services, since the system of alliances and consortia in container shipping can control prices to a certain degree. Avoiding a collapse of freight rates helps container shipping to survive, yet it also deprives its customers of cost reductions that would normally occur in times of declining demand. In addition, blank sailings reduce the service offer for shippers, while slow steaming can increase their inventory costs, considering that goods take longer to arrive.”

For much of the past year the ITF waged an ultimately unsuccessful battle with carriers to get European bureaucrats to change their stance on liner consortia block exemption rules (BER).

The ITF said it was likely that in the coming months carriers will seek more government aid. Last Friday, Splash reported how HMM, South Korea’s flagship carrier, had just received $382m in aid from Seoul.

Governments wary to disrupt supply chains during the current pandemic might be willing to bail out container carriers, something the ITF said raises a number of concerns.

A first concern relates to what the ITF termed as a “moral hazard”.

“The likelihood that a bailout will increase risk-taking of firms to levels that would be considered unsustainable if there would be no bailouts. The danger of such behaviour is certainly present in container shipping: various carriers have negative working capital and major container carriers have been able to rely on government support in recent history, with the notable exception of Korean shipping line Hanjin in 2016,” the report pointed out.

The 10-page document went on to claim that liner companies have shifted not only the bankruptcy risk to the public sector, but also climate change risks, health risks from air pollution and financing risks of public infrastructure.

The re-routing of vessels via the Cape of Good Hope to avoid the Suez Canal, as first reported by Splash, was cited as an example. The longer distance means burning more ship fuel and thus increasing both greenhouse gas emissions and local air pollution in coastal regions, while avoiding canal charges reduces the operator’s revenues and thus cost coverage of the public investment in the canal.

“Such externalisation of risks have been facilitated by tax exemptions of ship fuel, lack of inclusion of shipping in carbon pricing initiatives and generous exemptions of infrastructure charges by infrastructure managers – like canal and port authorities – in order to be more attractive than the competitor. The shipping firm can reduce its costs, but in the process increases the costs for society,” the ITF claimed.

Another concern raised in the study was described as a “race to the bottom”, where governments’ desire to protect their container fleets causes a vicious cycle of regulatory competition for the most generous subsidies and tax exemptions.

“By this logic, temporary support to weather a crisis become permanent; one country’s support measures invite others to match or outdo them; and some countries will expand their support measures to increase their shipping sector’s competitiveness,” ITF stated, suggesting that similar temporary measures put in place after the global financial crisis of 2008 had become permanenent.

The ITF suggested shipping sector can be considered as a sort of “hybrid sector”, supported in multiple ways by the public sector, but without aligning with public policy priorities such as creation of employment, generation of fiscal revenues and improvement of environmental performance because few conditions are attached to government support.

“In some cases,” the ITF wrote, “this leads to paradoxical situations where shipping companies ask for government support despite registering their ships in other countries to avoid taxation or labour regulations.”

In addition, the tax-exempt status of container shipping companies provides them with what was described as an “unfair advantage” when they want to compete in other markets, for example in terminal handling, logistics or digital freight transport platforms.

Concluding, ITF stated: “Governments should use the economic leverage of the Covid-19 crisis to address these concerns. Actions could include closing tax loopholes, reducing exemptions and introducing carbon pricing for shipping. Governments could also halt the unfair competition of tax-exempt carriers with non-tax-exempt companies with regards to logistics activities.”

The report urged governments to stimulate a more crisis-resilient container shipping model that includes clear conditions regarding the value the sector creates for society, embraces environmental sustainability and internalises external costs and risks in the price of containerised ocean transport. 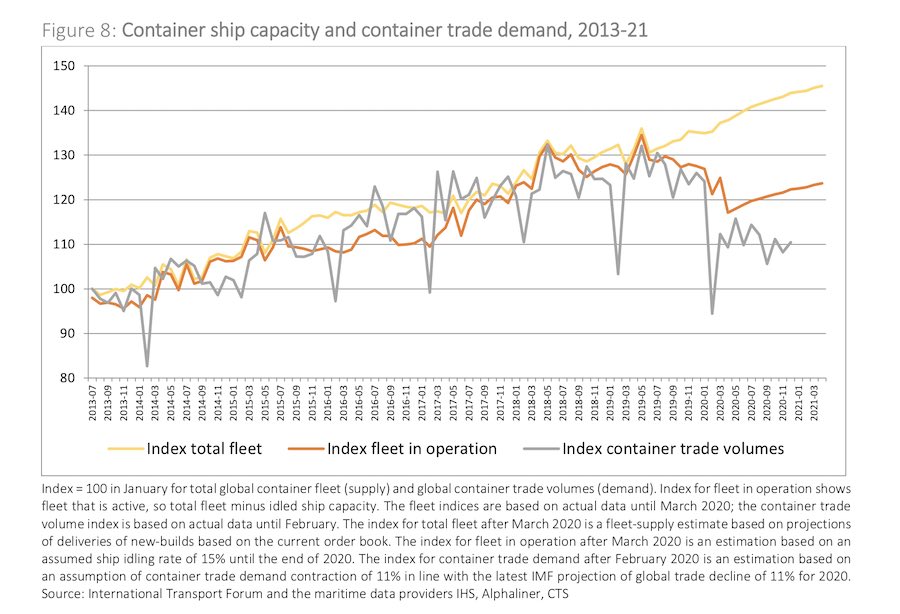