Launched yesterday for subscribers of Splash Extra, our team of journalists has combed through the the hundreds of shipping analyst reports published this month to pick out the best predictions.

All eyes in shipping this month have been tracking the fuel price spread between high and low sulphur content fuel oil in the first weeks since the imposition of the global sulphur cap. The price gap peaked on January 7 at $343 per tonne and has since dropped dramatically, heading towards $200.

“Even given the recent narrowing of the spread, shipping companies are still faced with a massive uptick in fuel oil costs, which is set to affect operating margins in the upcoming quarters, as many companies have little leeway to pass on the additional costs to their customers,” BIMCO noted in a note, adding: “Despite the lower spread, the investment payback period for a scrubber is between half a year to one and a half years, depending on the cost of the scrubber and daily consumption, which allows for substantial fuel oil cost savings for scrubber-fitted ships. 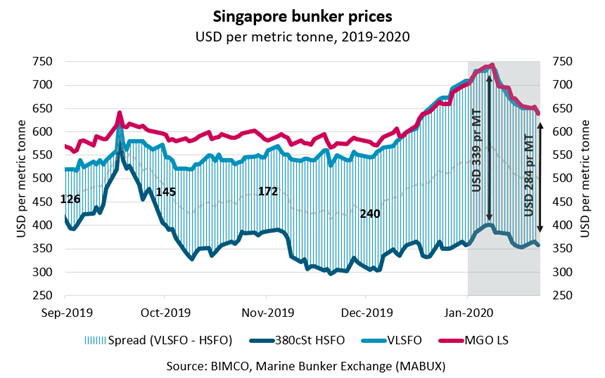 Three of the world’s most respected container shipping consultants – Alphaliner, Sea-Intelligence and Drewry – have made their 2020 fleet growth predictions, with the global liner fleet on course to pass the 24m teu mark this year.

Alphaliner is predicting the global containership fleet will grow from 23.23m teu at the beginning of 2020 to reach 24.05m teu by the end of the year, for a growth rate of 3.5%.

“2020 is expected to see capacity supply reach 1.3M TEU, the highest since 2015, but this is somewhat tempered by our expectation of higher-than-average scrapping of 500,000 TEU, primarily due to a larger number of smaller vessels becoming economically unviable, due to the IMO 2020 low-sulphur regulations,” Sea-Intelligence suggested.

Lastly, Drewry estimates that container carriers will add about 1.2m in teu capacity this year, increasing total capacity 5.3%, versus an expected increase in global trade in 2020 of just 2%.

Drewry’s global supply-demand index (adjusted for idle fleet) calls for a tiny decrease of 0.4 points to 90.6 in 2020, with any index reading below 100 indicating overcapacity.

Brokers Braemar ACM have run the numbers for the dry bulk sector this year, highlighting the enormous volume of larger bulker newbuilds set to hit the waters this year.

There are a total of 555 bulk carriers slated for delivery over 2020. These total 55.4m dwt, 36% greater than the total deliveries seen in 2019. The analysts at the brokerage are forecasting overall supply to grow by just over 4% in 2020.

“Fleet additions this year vary across sectors. Within each bulker segment, the 2020 orderbook is heavily skewed towards the larger designs,” Braemar ACM noted, pointing out that the 304-strong newcastlemax fleet is set to grow by 65 vessels this year, representing 21% of this segment’s existing capacity.

Similarly, with 156 of them set to deliver, ultramaxes are braced for their segment to swell by 17% this year.

2020 is also set to be a year for the revival of the mini-cape after a decade in the wilderness. This year will see the delivery of seven mini-capes, also known as baby capes.

Fearnleys neatly summed up the rapid descent of VLCCs in the middle of the month, stating:: “The market takes the stairs up, but the lift coming down”.

Nevertheless, Fearnleys pointed out that earnings remain “pretty good” from a historic perspective and the Norwegian brokerage remains bullish on VLCC prospects for the balance of the year.

J. Mintzmyer from Value Investor’s Edge looked at the seasonality of tanker earnings in a report published on January 16.

“Tankers are violently cyclical even inside of the cycles themselves. Thankfully, however, most of this internal cycling is due to clear seasonality,” Mintzmyer wrote in a note to clients. He went on to highlight how during the greatest bull supercycle in modern history from 2002 to 2008 there were at least seven ultra-violent collapses in rates. Six out of seven of those horrendous collapses occurred around the start of the next year.

“Almost always Dec/Jan into Jan/Feb. Down like a stone. No support. Boom! Seasonality,” Mintzmyer wrote.

In other notable tanker commentary, Poten & Partners reported how Unipec, a unit of Chinese state-run energy giant Sinopec, has tightened its grip as the world’s leading dirty spot charterer and is rapidly rising in the ranks of suezmax charterers.

Unipec continued to dominate the tanker charterer rankings in 2019 controlling 17% of all dirty cargoes globally compared to 14.7% in 2018.In the past year, Unipec made a major leap in the suezmax segment becoming the second largest suezmax spot charterer in the world, slightly behind Shell. Last year, Unipec was not even in the top 10 of suezmax charters, with growth mainly down to increased suezmax imports from Libya and more intra-Asian shipments. 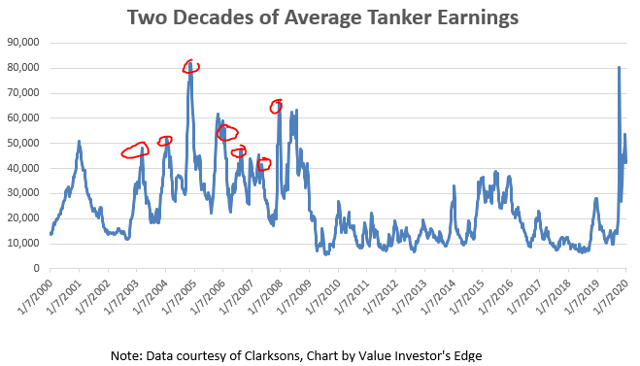 Braemar ACM data shows LNG volumes shipped last year grew by around 13%, reaching around 356m tonnes. Around eight new projects/trains were commissioned in 2019 with a combined capacity of around 22m tonnes per annum. The brokerage is anticipating global LNG trade to hit 390m tonnes over the next 12 months.

There were 42 conventional LNG carrier orders placed last year, making 2019 the fifth best year for newbuild contracting in history. 60% of all newbuild contracts placed in 2019 were on a speculative basis. Overall, at the moment, around 37% or the ordebook remains open.

“A number of significant shipping tenders are either already underway or likely to firm up on the basis of imminent FID’s, suggesting a healthy upcoming ordering potential for the delivery in 2024/25 period,” the company noted in a recent report.

Cleaves Securities is predicting that 2020 will mark the cyclical peak for the VLGC sector as demand growth abates, but earnings will stay elevated at least until 2023.

VLGC spot rates averaged a very solid $46,000 per day last year on the back of soaring US exports.

“With 32% of all fleet growth in 2020 scheduled for January, we believe the YTD weakness in spot rates will soon be forgotten as US exports could reach new all-time-highs in March and spot rates a stellar [peak of] $84k/d in April,” Cleaves noted.

While the peak may well be reached in Q2 this year, Cleaves anticipates spot rates to average $31,000 a day through to 2023, well above historical average levels. 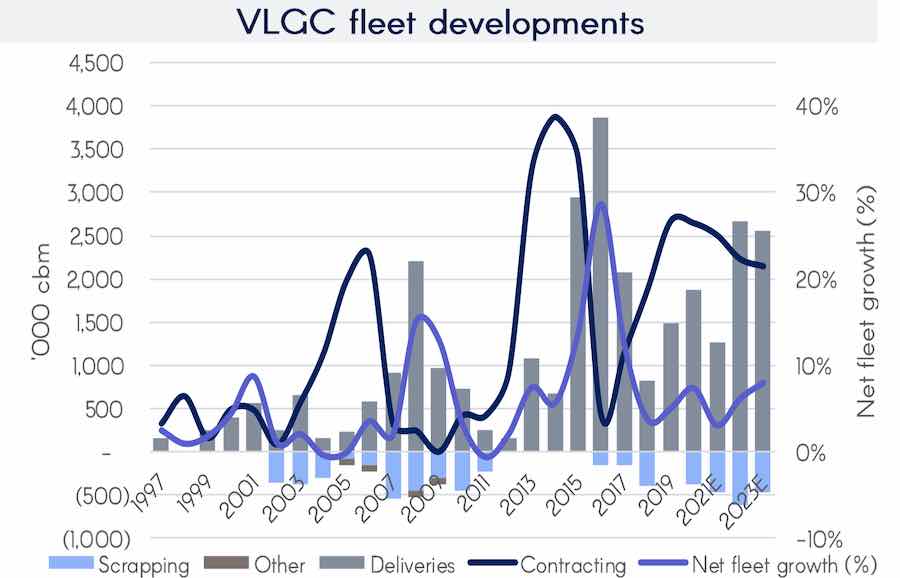 Signed up to the Macro Macchiato yet? Published for free by Shipping Strategy’s Mark Williams every Monday, this is an essential read from one of maritime’s best brains. The January 20 edition was especially good with Williams discussing all the green design measures being taken in bulk carrier design. In the report, entitled, A nuclear sub with a recycling bin, Williams mused over the irony of a carbon-neutral ship carrying thousands of tonnes of coal, a commodity that accounts for around one third of all bulk carrier demand.

Williams suggested demand for seaborne coal could easily peak and go into reverse within the lifetime of ships on the water today.

“Carrying 180,000 tonnes of coal on a carbon-neutral Capesize bulker is as cognitively dissonant as a nuclear attack submarine having an environmental policy and a recycling bin,” Williams wrote.

Global coal shipments are in excess of 1bn tonnes a year. Decarbonising the 18,000 or so bulk carriers of around 850m dwt that ship the coal (and all the other dry bulk commodities) is “commendable but ultimately futile”, Williams wrote, if the world cannot wean itself off coal in the first place.

“The greenhouse gasses emitted by ships are a small proportion of those emitted by burning coal. And if we do stop burning the coal, we won’t need all those bulk carriers anyway,” Williams argued. “No wonder the bulk carrier orderbook has been shrinking. There’s just no evidence that the world needs many more bulk carriers of today’s designs.”

And finally … the rat race

Lion Shipbrokers gave clients its annual tongue-in-cheek Zodiac take on what to expect in the Year of the Rat.

“Rat years tend to be a symbol of practicality and survival in times of scarcity (such as the dry market presently) but are also considered to be of an unstable, timid and stubborn character thus dry charter rates are expected to be unstable this year,” Lion’s Feng Shui experts claimed, adding: “According to an old Chinese belief, rats steal (eat) money, hence one should be extra cautious to make investments this year.”

To get this exclusive analyst snapshot plus unrivalled market commentary and data, subscribe today to Splash Extra, shipping’s must-read monthly title. The annual subscription price of just $100 will double from next week.