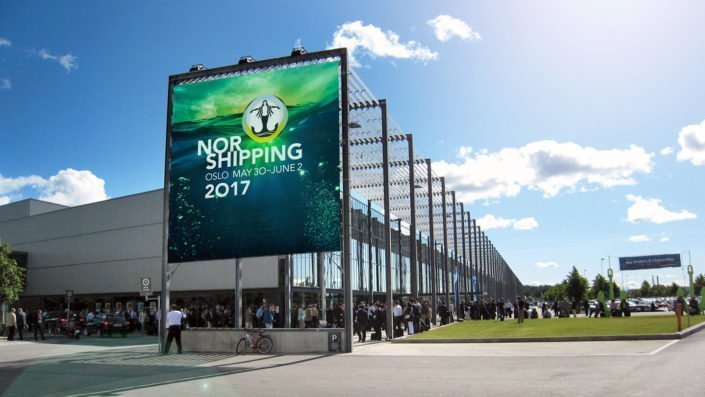 ‘You can’t stop the waves but you can learn how to surf’ read the sign in the window of a shop under renovation in central Oslo. Having walked past it twice a day for a week, it strikes me as classic Norway: make a snappy branding opportunity out of some much-needed adjustments.

Like the rest of the industry, Norwegian shipping is looking to the future, an approach anchored by the need to find new markets below the waves as well as above them.

It’s a vision that combines steel with data, rather than imagine that one will somehow sweep away the need for the other. There were far too many D-words at Nor-Shipping 2017 but for the most part you got the sense that the Norwegians realise they have to build the future of shipping, rather than just dream it. After all, in the key offshore market, the only way is up.

Other shows could learn a lot from the slick opening ceremony and conference sessions but as was pointed out to me, the panels touched on big issues but barely had enough time to scratch the surface before another futurist or disruptor bounded on stage.

The best moment was when academe met Greek shipping royalty and as Nick Tsakos remarked of Tony Seba, “I’ll have what he’s smoking”. Here was the main battleground: should shipping embrace disruption and change or can it hold off the barbarians long enough for markets to pick up?

There was definitely the same mood as exhibited in Stamford and Singapore – that the first quarter uptick signals something like a recovery and that profitable opportunities are increasing in number and size. Believing that this will turn into a sustained recovery is, I suspect, the triumph of hope over experience.

At Marine Money’s offshore event, a typically packed room once again heard the banks and funds point out that they were open for business and ready to talk and listen. But as one sector analyst pointed out over drinks, until they are prepared to accurately value the assets already on their books, they will find it hard to move on.

Peak disruption was felt around Wednesday and by week’s end dropping the D-words would get you looks of pity, dismay or even mild disgust. There are plenty of problems that need attention and plenty of areas for action but data, digitalisation and disruption cannot be the answer to all of them.

It’s the difference between actually making things and just making things up. It takes brains to do the former, anyone can do the latter. It’s hard to choose my favourite of the buzzword bingo contenders – ‘infonomics’ comes close, but I think in the end it is ‘datasparency’ a term that sounds like it should mean something but really doesn’t.

If there was too much disruption about, then for my money there wasn’t enough emphasis on the issues that will continue to challenge shipping, even it does recover some of its former lustre. A conversation with an executive just back from China and Korea was all about the ‘new normal’ and strategies for survival focussed on yet more cost saving.

Data helps with some of these, but when you combine structural overcapacity and loose money in search of projects with an industry full of Prosecco and smoked salmon, things look good from the deck of the Christian Radich, but not so hot next day.

If large areas of the industry were looking in the wrong direction through Nor-Shipping week, it’s not because they don’t have some good ideas. It’s because it is preferable to focus on the future when it looks so much better than the present.