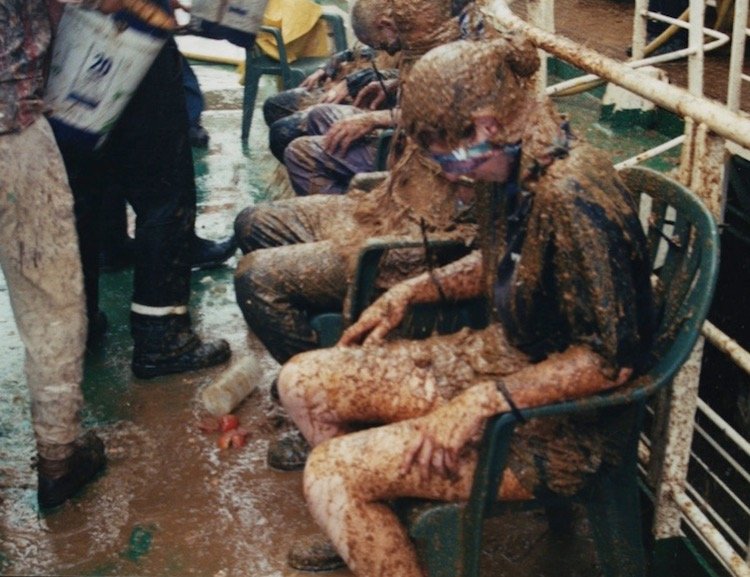 Humans pick up some nasty gifts from livestock as Dr Lynn Simpson details in her latest instalment for Splash.

I’m sitting in my cabin gulping water for my afternoon break, cooling my feet in the mini fridge; escaping the decks heat.

Next thing I know, four men burst through my cabin door, grab me, wrap a tight blindfold around my head, and laughing loudly, pin my arms behind my back and force me down four flights of stairs.

Outside in blistering heat I’m seated, cable tied by both wrists and ankles to a chair that is tied to a railing.

Stevedores warned me this would happen before I set sail. Cheeky bastards!

Laughter filled overexcited chatter and I hear what sounds like other people close to me struggling to be freed. I can see nothing, sense about 50 men around me and smell and hear sheep nearby so I know I’m on a livestock deck.

It’s a tradition. Rookies on their first voyage endure a ‘Crossing the Equator’ initiation. We are about to be granted a warped ‘right of passage’ by King Neptune, whilst crossing the Indian Ocean.

We spend the next hour or so having animal sewerage, the odd body part and any rotten provision from the galley, rain down on us from decks above. Its gross, as the header picture shows. But it is dementedly amusing for all involved, especially after the final rinse with fire hoses strong enough to rip your skin off.

Benefit of the rinse is twofold. One; you’re cooler. Two; the shit is off. One drawback; it does have the capacity to drive shit and other disgusting, potential zoonosis into your nose, mouth, eyes and ears.

Although gross, I think this ceremony is actually a great morale booster for the crew and breaks up the monotony of the average voyage. Afterwards you’re presented a certificate signed by the Captain and dubiously by King Neptune himself. One decade after my ceremony another captain thought it so amusing, that I was rearrested and the process repeated.

My resume is a diverse read!

Zoonosis is a fancy word for diseases that can be spread from animals to humans. Over 60% of infectious diseases humans can get come from animals. Some mild, some life threatening. Many found worldwide. A few I’ve detailed below.

It took me a while to develop my unhealthy addiction to the seemingly mandatory action movies played at night in the mess. In the years before I weakened to the charms of Jason Statham beating the hell out of his opponents (confession: I have a massive Statham ‘crush’) I spent my evenings studying for two veterinary masters degrees; one in public health, the other in epidemiology (the study of epidemics).

Both changed my perception of risk to the crews and animals onboard and made me a better shipboard vet.

I researched our destination countries and got vaccinated if necessary. The crews however don’t usually know where they are going, especially if they do a long contract. Their vaccination status was often dubious, potentially leaving them vulnerable.

Most ports we worked have stray dogs and cats wandering around, some of these countries also had rabies. A key vaccination I wanted.

Mild diseases commonly contracted include ringworm, a highly infectious fungal skin disease. Ringworm was on nearly every cattle voyage I did, regardless of it being a rejection criterion. I contracted it multiple times, and I wasn’t alone. It leaves a visible reddened patch on humans, and hairless rings on cattle, as shown below, taken at sea. 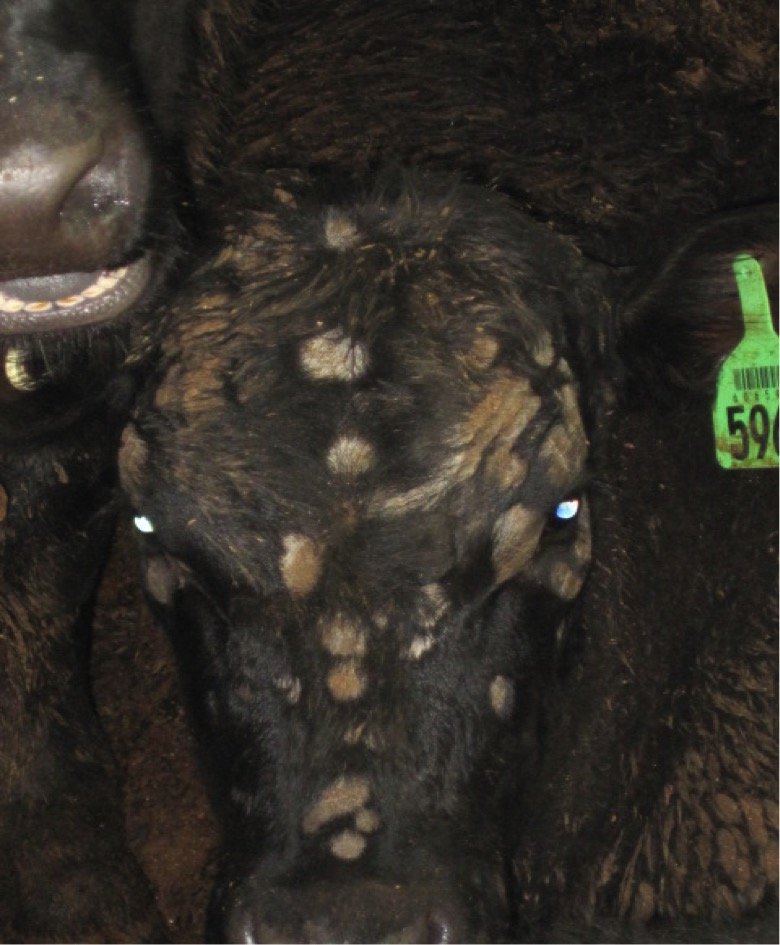 It’s itchy as hell and cattle scratch on anything for relief, we then touch a contaminated railing and spread is likely.

Salmonella can be the cause of diarrhea in the crew.

Scabby mouth is another worldwide disease. In sheep it causes scabs on the lips as shown below, making eating and drinking painful, and spreads through the troughs or direct contact. It’s also a rejection criterion from Australia, however it was always present. Not life threatening but undesirable. 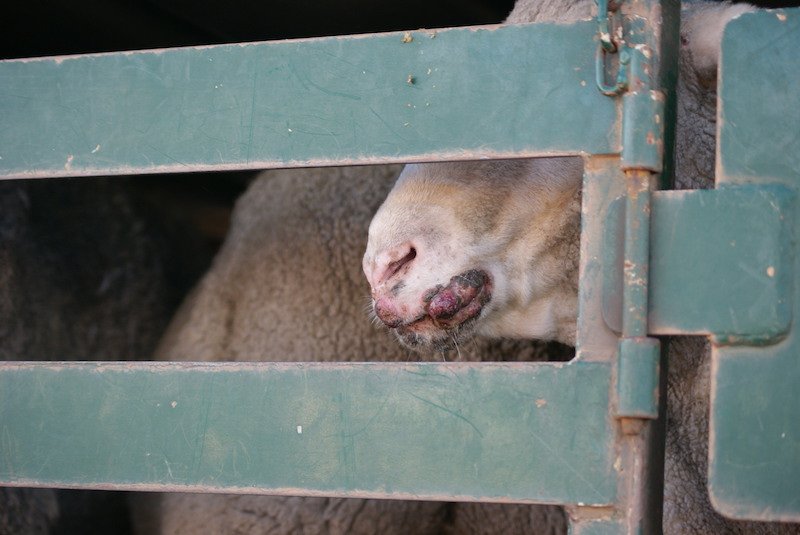 When a crewmember comes into contact with it they can develop a disease called orf. I contracted this multiple times. Subsequent scabs on your hands go away after a few weeks but are not cool and of course can perpetuate spread.

Conjunctivitis of varying causes is commonly seen onboard. One night after work I self-medicated, usually I’d use cattle eye ointment, which was white. Occasionally we carried the same drug but it’s made for infected cow teats and is dyed blue so that contaminated milk is identifiable. I didn’t care; I smeared some in each eye and went to read a now blue hued book before bed. Unexpectedly a crewmember visited my cabin with a question. He looked at me in shock. My eyes were bright blue all over; it was like I was reliving the ‘80s terrible blue eyeliner phase! He left quickly, but it fixed my conjunctivitis.

Another risk is leptospirosis; it’s spread by cattle urine and causes signs from headaches to kidney failure. It loves hot humid conditions; the ships were perfect for it.

Fortunately in Australia we don’t have brucellosis so my crewmembers were not in danger. However, other countries they visit have it and the symptoms range from sweating (hard to tell on a ship), joint pain and in extreme cases death from heart complications.

One condition that concerned me with our consignments was Q fever. It’s a robust bacteria spread by livestock secretions. It’s delivered in a wet or dry form. Once inhaled or ingested it often results in respiratory symptoms that range from cold/ flu-like symptoms to a form of pneumonia that can be fatal and require hospitalization. Most abattoir, sale yard, feedlot workers and vets in Australia are vaccinated against it. My blood test confirmed I had already had it so had immunity. No idea when or where, I’d obviously caught a milder form through my work.

Another deadly disease passed on from livestock is anthrax. Usually an animal is found dead in a paddock and the likelihood of an anthrax positive animal making it through export preparation stress and being a risk to crews seems inconceivable; however there is increasing thought that some animals may be ‘carriers’ who only shed the disease when stressed such as in a shipping environment. Clinical signs are generally, sudden death. Vaccine for animals and humans is available, however for humans has terrible side effects as reported by military personnel I know.

One voyage many cattle developed blisters/ ulcers on their feet and in their mouths. Australia is foot and mouth disease free, but would the importing authorities know that? I took photos and the Captain sent them to the vets and exporter who prepared the cattle: Question: what were we dealing with?

Much to the Captain’s and my disgust no one acknowledged our concerns. Fortunately (or not) I contracted the same lesions up one arm. This confirmed it was bovine papular stomatitis, a mild but painful transient disease. I asked the crew to wear gloves for their protection. Regardless, we didn’t want to alarm the authorities and risk rejection upon arrival. All easily identified cases were hidden in darker areas of the ship to avoid detection and questions from the importers.

Australia trades proudly off of our cleaner disease status however, animals being exported to countries with diseases they have not previously been exposed to or vaccinated against are at great risk. I’ve seen horrible photos of Australian cattle who have contracted foot and mouth disease upon arrival in foreign countries. One of the risks live animals face that boxed meat doesn’t.

Of course, anyone working with livestock is vulnerable to exposure of these diseases. I’m concerned crew signing up for livestock voyages are not informed of potential disease risks from the cargo. They work in close proximity, in artificial, forced ventilation and handle and dispose of animals who have often died of infectious diseases such as the image below of a respiratory infection on post mortem examination.

This is a sheep’s lung, it’s an undiagnosed pathogen. It’s difficult to avoid exposure during post mortem and disposal. 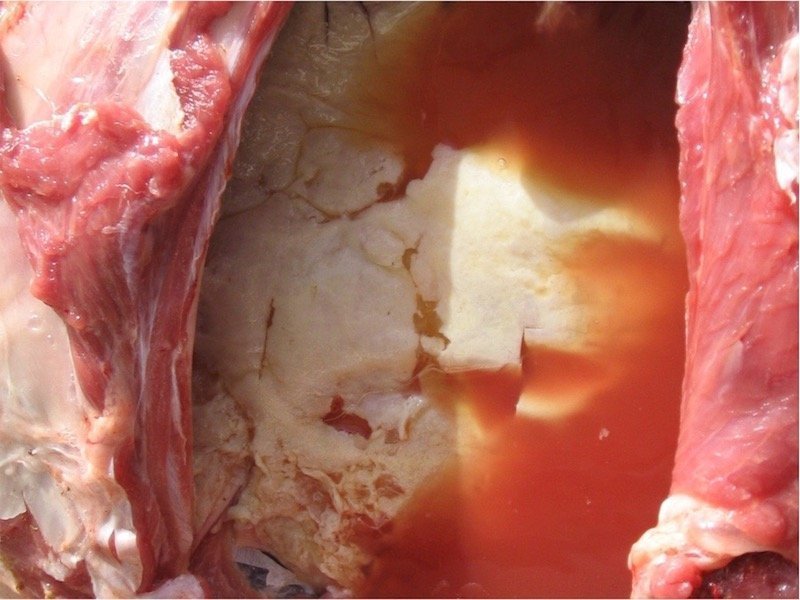 I wonder, are crews warned of vaccination requirements before joining a vessel? Do they have medical assistance if they get sick from exposure due to their work?

Who is liable for their safety?