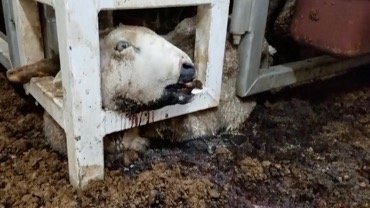 Splash’s livestock expert Dr Lynn Simpson praises the brave choices made by one Pakistani seafarer who may have changed the livestock trades forever.

Fazal Ullah is a man that any decent person on the planet should be proud of. He has my profound admiration.

As a new seafarer he joined a ship to be a navigational officer. Little did he know the ship he was to join would change his life forever and show the world his depth of character. His upbringing and intelligence graced him with a wealth of morals, ethics, kindness, compassion, bravery and extraordinary honour.

People should be queuing up to shake his hand and congratulate him on his personal values.

Many people from countries that have experienced national hardships such as Pakistan are often less vocal about wrongdoings compared to others from more entitled countries. Fazal stands in the elite group of moral, honourable superheroes such as Malala Yousefzai.

Fazal recognized a wrong that thousands of people have been exposed to on the world’s fleet of live export ships.

Yet most were silent to the masses. I know many spoke of disapproval during voyages, asked why do ‘we’ do this? Is this trade necessary?

I was not as smart as Fazal. I tried to improve things through official channels, not realising the failures of our regulator, the Australian Department of Agriculture. I did my job, sent my reports of concern and complaints with very little acknowledgement and close to no improvements. I wish I had had his smarts.

Fazal saw the extreme urgency of the animal and crew welfare issues and bypassed the flawed and ineffectual regulators and went straight to Animals Australia with a view of immediate exposure of the obscene suffering he witnessed. Animals Australia is an organisation that is now recognized for their relentless, proactive, commitment to improving global animal welfare.

The world changed at this moment.

The atrocity of the live export trade was now available for the world to see.

And see it has.

The global public and political groundswell of action and condemnation of this trade is only getting stronger every day. I watch as others watch the footage. I see their shock, shame, anger, disgust, and tears.

I read the comments coming in from around the world praising Fazal for his temerity and bravery.

The shipping industry can be fickle, especially the live export trade. Likely because the trade is operating on borrowed time and knows it regardless of the rhetoric it sprays. It should have died years ago.

The insecurity around its future from the operators is palpable.

Fazal may well have become another ‘lost at sea’ statistic if he were discovered to be filming and recording such atrocities with the view of passing them on to a powerful advocacy group for public exposure.

I wish I were exaggerating, but I have read too many reports about crew who differ in ethical views or risk adversity. Many a report has concluded with a vague statement speculating that the missing person is not conclusively thought to be a suicide or accident due to behavioural or attitudinal differences.

The world is in awe of Fazal and his courage.

He should be considered a role model to all people on this planet and especially the seafarers sailing the seas in a poorly transparent industry such as shipping. Both Splash and I have tried to get him formal recognition and/or an award from the IMO.

His contribution to animal welfare and animal cruelty awareness makes me brim with pride as a former seafarer.

Unlike many ‘whistleblowers’, Fazal has been rightly recognised for his honourable action and now has a choice of amazing future career paths. I believe this shows a change in the world’s perception of whistleblowers.

The public are sick of big business and government lack of transparency and their brutal reprisals against truth tellers. Whistleblowers like Fazal are finally getting the respect they so greatly deserve!

I believe all decent people in the world wish you well, Fazal. Thank you.