In the third of an explosive series for Splash, leading Australian livestock expert Dr Lynn Simpson dishes the dirt on what happens in rough seas.

Don’t believe the lies, size does matter! To livestock and me.

Having done 57 voyages from Australia to the northern hemisphere, traversing the Bass Strait, crossing the Great Australian Bight and skirting the odd cyclone, I’m no stranger to rough weather. I’m also not immune to it. I’ve sadly done my fair share of puking as a result. This has generally been on vessels that I consider small. I would shy away from any vessel shorter than 170 m. Yep, I’m a pathetic seafarer. The smaller the ship the greater effect heavy seas have on a ship’s (and a vet’s) motion and speed. Simple physics, and physiology.

Live export vessels range in carrying capacity from less than a thousand cattle to about 20,000, or their sheep sized equivalents (3,000 to 120,000) and anything in between. 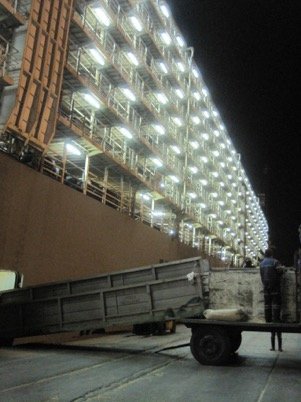 Seasickness (motion sickness) is essentially determined by the movement of tiny hairs deep within the ear’s anatomy. Some people get more affected than others. I believe I’ve observed the same with livestock in rough weather and heavy seas.

When I’m seasick, I’m listless, grumpy, don’t want to eat or drink and just want to lie down and sulk. This behaviour is clearly identified in a percentage of the livestock aboard these vessels. And then, voila, the seas calm and all symptoms are gone, no illness is apparent and the animal’s attitude improves along with mine.

The rolling, pitching and corkscrewing of a vessel during heavy seas can also lead to exacerbated leg abrasions and injuries from aggressively rough deck surfaces. 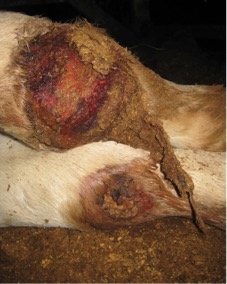 Large ships are like a floating multi story carpark and the reduced movement due to seas provides a much greater animal welfare outcome for animals onboard. Small vessels, not so much.

Of course sea conditions can be postcard beautiful, or terrifying.

With calm seas things usually run as expected, when rough and unpredictable things can be more challenging.

I’ve had filthy, foot deep shit covered main decks washed clean by a handful of waves overnight, with possible loss of animals over the side and others sustaining injuries such as broken legs and necks from being thrown into rails.

Other times, the rolling and pitching hampers deck wash downs and makes life much harder for all trying to clean and drain the decks. 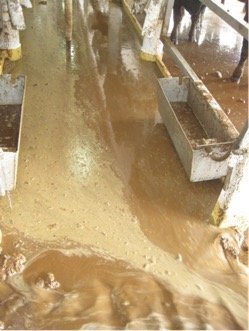 Once in the Great Southern Ocean, somewhere between Antarctica and Australia a sheep was picked up by one of many freezing cold rogue waves several decks above the freeboard, thrown into a gate pin, ripped open from his sternum to his mid thigh, landing at my feet with his intestines and liver spilling over my boots and onto the walkway. I cut his throat within 10 seconds. Others were also hit by rogue waves in upper decks and thrown around like ragdolls. Thousands of sheep were being smothered by others and hundreds died of hypothermia within hours. Hyperthermia is our usual thermal enemy in live export.

Within minutes one of the crewmembers working with us to unsmother the sheep where this eviscerated one came from was thrown into the walkway in front of me. He hit the same pin I had just unhooked the now dead sheep from. His overalls were torn from sternum to thigh. They protected him from being eviscerated like the sheep but he was taken away unconscious in a makeshift stretcher made from an emptied feed trough. I was new to the company and they wouldn’t let me tend him. There was no other medical help. I never saw him again and when I asked about him people just looked away.

Nothing can be done about temperature or rogue waves. They are part of the thrill and inherent danger of shipping. Standards of maintenance however we have more influence over.

The Australian Maritime Safety Authority (AMSA) is very strict on ships trading out of Australia. If a ship is rejected it cant load Australian animals. These ships either go to scrap or unfortunately some begin to trade from countries that do not have as rigid safety standards. I’ve seen some dodgy ships in foreign ports that I was grateful not to sail on.

One such vessel was the Danny F 2. She eventually failed her AMSA inspection and was denied a renewal of her Australian Certificate to Carry Livestock (ACCL). Instead of going to scrap as was expected she began to trade out of South America. Tragically in 2009 on her way past Lebanon she lost power in heavy seas, capsized and sunk.

Lost with the vessel were over half the 83 crew, including a dear friend of mine, Gary Beckett. He was one of the most amazing stockmen I have ever had the privilege to sail with. Nearly 18,000 cattle and over 10,000 sheep also died in this tragedy, their bodies hampering efforts to rescue the crew.

A robust, international standard for the safety of livestock ships, such as that imposed by AMSA could help prevent tragic loses such as this occur again.