Get me out of here!

That’s normally how the whole crew feel about leaving port after loading – just ‘throw the ropes’ and get us out of here. It’s the same sentiment at the end of our contracts, be they short or hideously long.

Frustratingly during voyages animals are often found trapped not only on a ship at sea, but stuck in the infrastructure that confines them. I’ve had their heads, legs, feet and entire bodies trapped in the unnatural environment of their transient home.

On land, if discovered in time, you can often go get equipment to free these animals. At sea, we can’t call for assistance. We need to make do.

Becoming a cattle vet I thought I would carry the usual kit: medications, surgical instruments, the odd rope, a pulley and, believe it or not, we usually carry an empty wine bottle to un-invert prolapsed uterine horns (I’m sure the farmers just think we have a drinking problem when they spot it), antiseptic, towels, etc.

A few voyages at sea and I realised my kit would extend much further. It would include much more rope, a heavy-duty block and tackle, (or crane access if possible), a garden saw, an axe, a car jack, a gun, many knives and, if necessary, an oxyacetylene torch/ welder with a trained ‘fitter’.

How some of the animals at sea got into some predicaments still makes me wonder. I suspect boredom and curiosity such as below is the starting point. This bull is trying to self-serve from the fodder delivery chute, smart cookie. 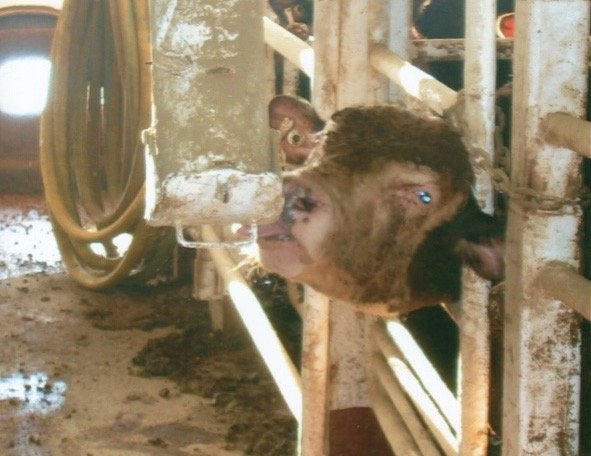 However it doesn’t always end in an overflow of pellets – cheeky behavior rewarded. Often it ends with a period of bovine embarrassment/stress, such as this little fella below who required sedating, facial protection and a grinder to free him. 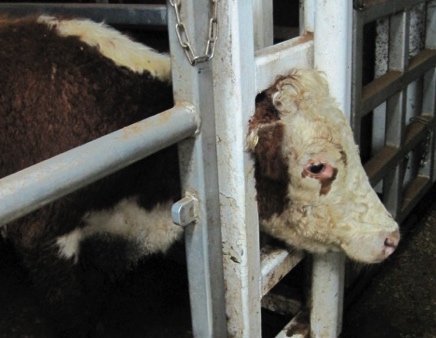 Usually we can get them unstuck without drastic measures, but occasionally the animal’s behaviour or subsequent swelling means we can’t undo their ‘adventure’. If this ‘adventure’ results in severe injury there have been occasions where I’ve had to shoot the animal and cut it into pieces for removal from the stuck position – then feed the fish.

Thankfully with some creative thinking, the right chemical restraint, fluent profanities and enough muscle power we can usually get them unstuck.

The bull pictured in the title picture was not so lucky; he had become stuck and subsequently died of secondary bloat before he was noticed. His pen mates had obscured his predicament. Animals like him were often found between rails. Usually we can simply slip a car jack in between the rails and pry the rails apart enough to free the bull and piss off the poor ‘fitter’ who has to fix the gap on the return trip.

On one voyage of long horned feral goats, I found so many trapped by their horns whilst trying to access troughs that I carried a garden saw everywhere I went. I’d cut one horn off they were soon free – if they hadn’t suffocated or drowned in fodder or water before I found them.

A stockman asked me once if I’d moved the ‘sickie’ he had removed from a pen, and left in the alleyway as he went to set up a hospital. Nup, haven’t seen him. One AWOL Brahman bull. No one could find him and we assumed one of the crew had put him back in a pen thinking he was just an escapee that had climbed out somehow.

Two days later I was doing my rounds when a frantic crewmember with little English grabbed me. Big problem Doctor! Big problem, come!!!!

OK, I followed at a jog.

Not in a million years did I expect to see this angle of a bull.

Ships have emergency exits on most decks in the form of vertical ladders, tiny access points in alcoves. On alternate floors the ladder is offset so if you slip you only fall one deck then step to the side and take the next flight. The climbing gap was about the size of a side on 44-gallon drum.

Somehow the missing bull had fallen down a vertical escape ladder and got jammed. He was upside down; all we could see was the soles of his four feet, brush of his tail and his upturned face, stuck on the rim stopping him from slithering to the next deck. He’d already dropped two decks. From below this deck his body looked like a big hairy beer belly poking out from under a too short shirt.

Ropes, multiple men, block and tackle, and we eventually pulled him up and out. Once free he wanted to kill us all! He was mighty pissed off!

This was special, usually they have just fallen into a drain or through a bilge cover that has fatigued or been left off, these ones are simple, result in minor injuries, but easy to fix. See image below. 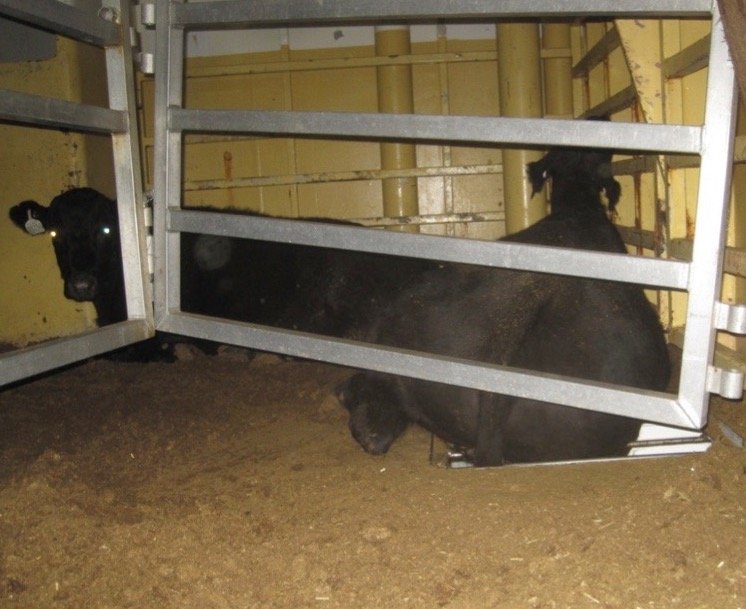 One day I saw a head lying in an alleyway. I thought it was another ‘notification gift’ for me. I went to grab the ear tag for my mortality records, only to have the head look up at me and start to struggle. A heifer had reversed and fallen into a submersible bilge pump tank, only her head above the muck line. Rope, block and tackle, many hands and she was extracted and recovered.

Rams often get their horns curled around rails; my good old ‘Leatherman’ cut many a ram free. However what it couldn’t cut free were the sheep stuck in a 30cm wide, offset (fortunately), steel drainage tube between decks. Whilst doing my rounds, I noticed wool bulging out from the 6-inch gap at the bottom, I went to clear it to keep drainage functional. The wool wiggled. WTF? I pulled on it again, more wiggling; I managed (with difficulty) to pull a live sheep out! Then a second. Then a third. No idea how long they had been stacked like tennis balls in a tube. I was amazed they were alive and all drain covers were replaced or fixed by next voyage.

The most bizarre death trap I was shown was was during a visit to an engine room one day. Whilst there one of the engineers pointed up to the inside of the funnel.

“Can you see the two black lumps wrapped around that metal frame”- he pointed?

Yeah, what about them?

“That’s two dead monkeys, they were loaded in South America some time ago, escaped from their pens and climbed up there, wouldn’t come down, then died”.

It’s not the most accessible space and their desiccated, exhaust caked bodies are possibly still there.