Apologies to all who have asked me for details regarding the reported deaths of 3,027 (4.36%) of the sheep loaded in Fremantle, Australia onto the Al Messilah last July destined for arrival into a Middle Eastern summer.

Quite frankly, having sailed on that vessel, knowing the crew and having personally thrown mass numbers of dead, heat stressed, decomposing sheep bodies, into the ocean from other vessels I simply didn’t want to address it again. My minds eye allowed me the luxury of turning away.

My memories caused me disgust. This disgust has driven me to share what I know. Raise awareness for the animals and crew involved in such gross and deadly events. They can’t speak up openly because they are either dead sheep, or crew who would likely experience reprisals such as loss of their job.

Now many people may say, the crews are scum for being in this trade in the first place. Wrong. I guarantee that the crews I sailed with are well-meaning family men. They work long, hard hours. Month after month, seven days a week, looking after the livestock as best they can under very trying conditions so they can provide for their families thousands of miles away.

Often highly educated but with no job opportunities at home.

This particular deck crew are from Bangladesh. Researching Bangladeshi wages I discovered, that the hourly rate for an unskilled labourer in Bangladesh is around $0.24 cents an hour. No wonder they head to sea.

I avoided conversations onboard with all crew about wages, the disparity was huge and in my view they were being exploited. Their wages at sea are likely much greater than $0.24 an hour, but by how much? When you see the work they have to do you soon realize how much a westerner would demand for it, and then likely quit asap.

The conditions they live in are frugal and on one voyage I did on this vessel the master, spitefully, had the air conditioning turned off from the Bangladeshi cabins. The officers still had full A/C. Crew slept outside on the deck for respite in the Persian Gulf during summer. Fatigue was rife. The master’s behaviour was totally unacceptable and had I known about the IMO or HRAS I would have made a report immediately.

On the topic of A/C, let me be very clear, live export ships do not have “air conditioning” in the livestock areas. Air is supplied by fans, but it is ambient temperature. The temperature in the Middle East during summer is predictably in the high 40s, even into the 50s, Celsius. A great reason not to take live animals there especially in summer from a southern winter.

The sheep themselves generate heat like being in a crowded elevator, and the sea temperature at that time of year was around 30.5 degrees Celsius. So the ship was sitting in the equivalent of a warm bath making it a hot, humid metal box.

Heat itself does not generally kill sheep, humidity does.

I’ve discussed in a previous article what happens to the actual sheep when a tragedy like this occurs. I won’t traumatize you further with their final moments. My goal is to inform you of the difficulties and duress the crew face during such a preventable disaster.

When I have had hundreds of bodies to dispose of I have had the relative luxury of disposing from open decks. Meaning you grab the sheep as soon as possible and drag it to the nearest edge and push… splash. 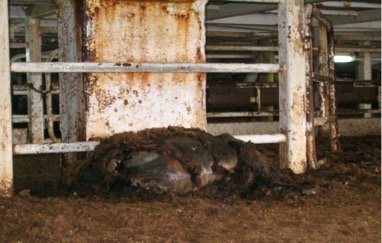 Decomposition (rotting) begins within hours. Meaning the body often falls apart when you grab a section. One sheep becomes multiple swollen, gelatinous and often gas filled slimy lumps with shedding wool, discoloured skin and eyes, tongues, anuses and prepuces that protrude further than you would think possible… until the body pops.

At this point the normal NH3 and CO2 gases are mixed with the stench of death. Making shit seem like a perfume.

The Al Messilah does not have open decks. Removal of all dead sheep would require the bodies to be physically moved to the choice of about four outlets. This means the process is slowed. The bodies getting more decomposed.

An old friend was the vet on the Becrux in 2003 when 30% of the cattle being carried died in closed decks. He told me after many a drink years later about how “it was like trudging through a disgusting soup of decomposing body parts”. He detailed how difficult it was to get the bodies out as they fell apart in your hands. Instead of doing the “western world” thing of wearing PPE, they stripped down to just their work boots and jocks. They knew they would never get the smell out of their work clothes.

The ship was shrouded in a cloak of stench, there was no escaping it, and it was recycled through the vessel via air conditioning in the accommodation and equally re-circulated back into the livestock holds.

When trying to eat or drink, even after a shower, hands smell so awful many gagged, and many of these crew nationalities do not use cutlery. Heat stress and fatigue besieged the guys trying to clear the surviving cattle’s living area of their dead pen-mates.

Once disposal is finished on a cattle ship the decks can usually be washed down, including the cattle and the rotten mess feeds the fish.

The problem with a sheep carrier such as the Al Messilah is that you cannot wash sheep decks while there are live sheep in them. Sheep, water and increased humidity are a recipe for disaster and further deaths.

So… my recollection of disposal from this ship is of dead animals being lifted into a wheelbarrow and pushed up or down a ramp to the few exit points. If the animal is decomposing rapidly they would be delicate to move without making them fall apart or gently explode, degassing internal buildup. Gross. The men on this voyage likely utilised empty chaff bags to fill with bits of body and then shovels to fill the barrows with fluid discharge and abdominal contents. The bags would seep with body fluids and be reused until worn out.

The ramps inside the ships are designed to have cross cleating to reduce slipping. Hence when pushing a wheelbarrow of gelatinous, soaponified, possibly soon to explode dead sheep/ parts around the jolting would have made for a terribly hard and disgusting job.

I wager there was much gagging and vomiting on deck.

All available hands would have been called to the deck to deal with this, everyone who wasn’t critical for propulsion and navigation. Engineers, bridge officers, cooks, anyone. A cook told me once of helping in such an event, he would then return to the galley to prepare the ship’s meals. They ate nothing but sandwiches for days. The cook was still traumatized years later from his time on deck throwing bodies to the sea.

The details of this voyage have been procured via Freedom Of Information by an organisation called VALE (Vets Against Live Export). The detailed information makes for grisly reading.

Once all the bodies were disposed of the daily and end of voyage reports admit that they had lost count of the number dead. A discrepancy of around 1,200 was the final result. This scenario is easy to believe. They were dealing with body parts not entire bodies. In hindsight counting the number of actual skulls going into the sea would have been more accurate, however in overwhelming times like this its not practical to have counters waiting at disposal points. Better to simply get the dead bodies out and provide some reprieve for both the surviving animals and the crew.

So now finally they would have had a ship with only live sheep in it; however the decks would still be covered with melted fat and body fluids from the dead animals. Sheep ships do not carry sawdust for bedding so freshening up the decks even minimally would not have been an option. The sheep had to rely on their own sewerage to soak up the fetid, putrid fluids of bodily decomposition.

The ship would then have approached port and the officials coming on to inspect the cargo would have their hands over their mouths and well within their rights to question the health status of the remaining sheep. It’s well known that there is often a second wave of deaths due to kidney failure after a heat stress incident.

The best thing to do is to get the surviving sheep off the ship, but what country would want to unload animals that are at high risk of dying in the following days? This increases the risk of a consignment rejection. No one wants that.

Once the ship is fully empty the proper cleaning begins on the return/ ballast voyage. The sheep decks are soaked with hoses and gradually washed clean and literally scrubbed with small scourers to ensure they are not carrying any biological material of risk to the next country.

During this wash-down process, especially on a closed sided ship all waste is pumped out to the sea via bilges. Bilges are notorious for growing toxic, stinky bacteria and a strange grey scum and goodness knows what else even at the ‘best’ of times.

However, after such a disaster voyage they would likely become the engineer’s nightmare. They would likely rapidly and repeatedly block up with rotten pieces of sheep skin, small bones, horns, sloughed hooves and shed wool that would have been embedded and buried in the natural sewerage substrate that the sheep ‘rest’ on during a voyage. The bilges would stink, and the engineers would be irritable at best thinking this is worse than any black water problems they had ever encountered.

No one should be expected to repeatedly work in such highly predictable circumstances. Live exports, especially to the Middle East in summer have long been known to be of high risk for heat stress deaths and hence crew exploitation. Is it any wonder so many crew have jumped ship in port over the last few decades?

I believe the vet and crew did everything they could with this situation. They would have needed a magic wand to avoid disaster. There were no recorded breakdowns and being closed sided the mitigation maneuver of zig-zagging was pointless. Zig-zagging is a technique that has saved countless animals lives.

This disaster is another example of the inherent risks of transporting animals by sea, the inadequacy of the live export standards and the need to reconsider ceasing this trade.

The factors that prevented this disaster being of exponentially greater proportions is that this ship was loaded 10% light and has only single tiers. Had she been a double tiered, closed sided ship at this point I hate to think what the mortality rate could have been.

As another Middle Eastern summer subsides for the year, we sit back and wait for the next declaration of heat related mortalities on live export vessels.

I wish someone from the IMO would accompany one of these voyages, especially in summer and see if they approve of what these seafarers endure?