Maersk is sending a brand new boxship on the Northern Sea Route (NSR) in the next few days in a landmark voyage for container shipping. 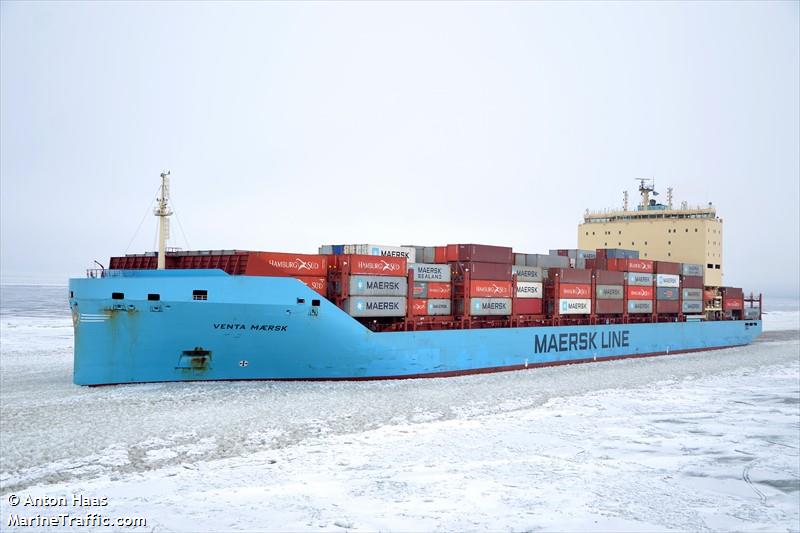 was delivered last month and is now in Vladivostok about to start the world’s first containership transit across Arctic waters.

To date, non-Russian companies to have dominated Arctic transits have been China’s Cosco and Japan’s MOL. For Maersk, this trip will be an exploratory one, looking to pick up scientific data to see whether the route can be more fully utilised as an alternative to the traditional Asia – Europe route via the Suez Canal.

“This is a one off,” a spokesperson for Maersk Line told Splash today.

Venta Maersk is the fourth of seven sister vessels and was delivered on July 11, 2018. This will be the ship’s maiden voyage towards Northern Europe where it will be trading along with its already delivered sister ships deployed in Seago Line’s network.

“It is important to underline that this is a trial designed to explore an unknown route for container shipping and to collect scientific data,” the spokesperson said, adding: “Currently, we do not see the Northern Sea Route as an alternative to our usual routes. We plan new services according to our customers’ demand, trading patterns, and population centres. That said, we do follow the development of the Northern Sea Route. Today, the passage is only feasible for around three months a year which may change with time. Furthermore, we also must consider that ice-classed vessels are required to make the passage, which means an additional investment.”

Maersk will endeavour to start the Northern Sea Route trial passage from east to west by passing the Bering Strait on or around September 1. The specific transit route will be as per agreement with the Northern Sea Route administration after careful evaluation of ice conditions. Under plans being considered at the moment, the route will include stops in Vladivostok Fish Port, Vostochny Stevedoring Company, Busan, Bremerhaven, Saint-Petersburg Petrolesport.

Maersk’s new Baltic feeders are among the world’s largest ice-class vessels designed specifically to operate in cold waters, down to -25 degrees C, where ice-class is required to offer year-round operations. They have a nominal capacity of 3,596 teu and are equipped with 600 reefer plugs.

High North News claims the Venta Maersk will be carrying a load of frozen fish on the historic voyage.

Commenting on the Maersk news, the Arctic Institute’s senior fellow Malte Humpert stated: “Russia’s Northern Sea Route has seen a rapid increase in cargo shipping in recent years. Most traffic, however, has thus far been limited to bulk shipments of natural gas and oil. Maersk is now dipping its toes into Arctic waters by sending the first-ever container vessel along the route.”

Humpert further elaborated: “This initiative sends a clear signal that Maersk will not sit idly by as major competitors Cosco and MOL are growing their operations along the Northern Sea Route. The voyage of the Venta Maersk will allow Maersk to gain valuable experience about shipping in Arctic waters and help it determine if operating containerships in the region is commercially viable.”

Kathrin Stephen, another senior fellow at the same Washington-based think tank, added: “The Maersk containership is likely to be a stunt by the Danish company to demonstrate its polar technology capabilities. Despite this being the first container ship to sail the NSR, regular business container shipping is unlikely to unfold on a large scale on Arctic routes.”

Ryan Uljua, another senior fellow at the institute, reckoned the voyage was indeed a one-off, thanks to liner shipping’s needs to have very fixed schedules.

“The upcoming voyage has the hallmarks of a one-off feasibility study rather than the start of a new trade pattern,” Uljua said, adding: “More so than tankers and dry bulk carriers, container lines – and their clients – value reliability and predictability of schedule over speed. While Arctic routes may reduce distance and bunker costs, it remains to be seen whether the harsh conditions of the Arctic and myriad opportunities for delay––weather, ice conditions, environmental regulations, icebreaker availability, etc––will reduce sailing times while maintaining schedule reliability. ”

Uljua predicted trans-Arctic container shipping patterns were unlikely in the short term and would only happen decades from now.

Andy Lane from container consutants CTI Consultancy suggested Arctic voyages for container shipping would be few and far between.

“I think that the Arctic route can be an ad-hoc offering for the peak season,” Lane told Splash, adding: “With it open for a maximum of three to four months per year, it would cause some supply chain chaos as well as network planning issues to operate a service through for part of the year and then through Suez for the rest.”

When operating later in the season through sub-zero ambient temperatures for extended periods, Lane warned there might also be some cargo degradation issues to consider.