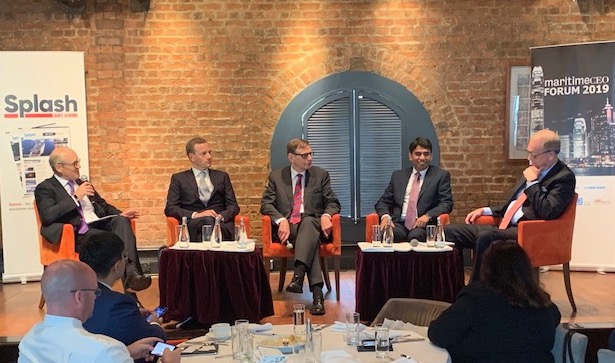 A huge swathe of the first generation of double hulled tanker fleet are coming up to their scrapping age in the next couple of years, and yet owners are reluctant to order over the uncertain regulatory climate, delegates attending the Maritime CEO Forum in Hong Kong were told yesterday.

The annual by-invite-only event took place at the Foreign Correspondents’ Club with more than 50 shipowners in the room for a high profile start to Hong Kong Maritime Week.

“Ships that will turn 21 or 22 in the next couple of years is a huge portion of the fleet – but demand is there, so you will get extreme volatility on the lack of fleet replacement. That is where we find it very interesting from an asset point of view,” said William Fairclough, the new managing director of Wah Kwong Maritime Transport Holdings.

Despite the fleet facing a cut in capacity, shipowners are hesitant to order, concerned about whether new ships will be able to trade for their whole economic life.

“This is one of the hottest topics around,” said Dr Martin Stopford, president of Clarkson Research Services. “There is no way to know whether diesel ships will be around in 2030 or 2040. Shipyards are desperate for orders and are ready to offer attractive deals but no deal is attractive enough.”

Stopford went on to urge regulators to issue clear guidelines promptly, including possible phase-out plans like single hull tankers at the start of the century.

Fairclough said the next phase of tanker ordering would be dual fuelled, a costly endeavour. “There is a realisation that shipowners will not order ships unless with long term charters,” the Wah Kwong boss said.

He warned that the mergers of Asia’s top shipbuilders – CSSC and CSIC in China and Hyundai and Daewoo in South Korea – could see more “belligerent pricing”.

A full report from the session will feature in Maritime CEO magazine. The next forum takes place at the Fullerton Hotel in Singapore on March 17 next year.