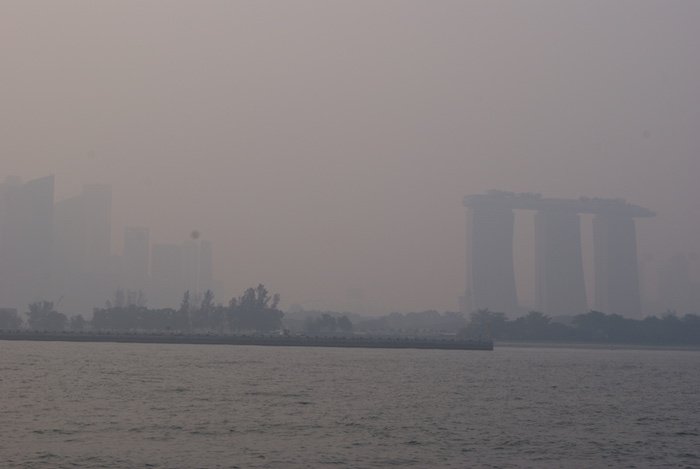 Just 18% of those surveyed for Splash’s annual Singapore magazine say they’d relocate if this year’s smog from Indonesia became the annual norm.

Singapore, famed for its commitment to green urban living, has long been bedeviled by the land-clearing actions of neighbouring Indonesian plantation owners. This year’s haze induced by Indonesia’s fires has been especially bad, the worst in the Lion City since 1997.

The toxic smoke has brought significant disruptions to business as Indonesians went about raising 21,000 sq km of forests and peatland by the end of October. 21,000 sq km – that’s around 30 times larger than the island republic of Singapore. In just a few months the fires alone have emitted more carbon than the annual emissions of Germany or Japan. These emissions – which have harmed up to 75m people in the region this year – are likely to add about 3% to total global greenhouse gas emissions from human activities for 2015.

It is testament to the remarkably strong drawcard that is the maritime cluster in Singapore that just 18% of the 250 people surveyed for this magazine said they’d leave the country if the recent bout of haze became the annual norm.

Nevertheless, many expatriates – especially those with young families – will mull alternative destinations if the smoke does repeat to similar levels next year, our survey found.

Pankaj Khanna, ceo of fast growing dry bulk owner Pioneer Marine, comments: “If two months out of the year are spent with the haze, expats will not want to live and work in Singapore.”

Matt Cannock, managing director at insurance firm Markel International Singapore, says it’s unlikely his company would reposition from the city-state as a result of the haze, but it would certainly make he and his team deliberate about expansion plans.

Mary Baey, ceo of Satcom Global Singapore, complains: “It does disrupt the day-to-day operations of the business especially where engineers working on ships installing satellite communications hardware are put at risk due to decreased visibility and dangerous air pollution.”

Steve Dillon, from BBC Chartering’s Singapore office, relates how staff there have been advised to take holidays if possible away from Singapore during the haze period. More incredibly, Dillon reveals one solution the German heavylift operator has mulled to keep working in years to come as the thick deadly smoke hoves into view.

“We have also considered to build or purchase an office purpose-designed accommodation barge, which can be towed to healthier climes,” he says.

Captain Jonathan Walker from London Offshore Consultants’ Singapore office, who remembers the horrendous 1997 haze well, says it is vital people stand up to make sure action is taken.

“We do not believe that the haze should be accepted as a norm. It needs to be urgently addressed by all the regional governments,” he stresses.

This article first appeared in the recently published Singapore Market Report 2015, published by Splash. Readers can access the full magazine for free by clicking here.