Local newspaper JoongAng Ilbo reported this morning that the South Korean government will look at the shipping merger soon when a vice ministerial meeting on corporate restructuring is convened. The report was dismissed by the Financial Services Commission which maintains the government has not sought a merger. Both HMM and Hanjin continue to deny that Seoul is pushing for the pair to merge.

Nevertheless, the JoongAng Ilbo report scared investors with HMM’s share price sliding as much as 15% in early trading and Hanjin Shipping’s declining 5.8%.

Speculation on a government-coerced merger between these two rivals has been growing for the past six weeks.

Combining the pair would catapult them up to fourth spot in the global liner trades, according to Alphaliner, breaking the 1m slot barrier and positioning them as Asia’s largest containerline, larger than Taiwan’s Evergreen. The pairing would have a very strong position on the transpacific in particular.

Statistics provided exclusively to Splash by VesselsValue.com show the combined entity would rank as the 19th largest shipping line in the world with a combined fleet worth more than $4bn. 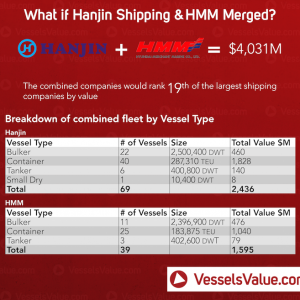