According to new data released by the NGO Shipbreaking Platform, 744 large ocean-going commercial vessels were sold to the scrap yards in 2018. Of these vessels, 518 were broken down on what the NGO described as tidal mudflats in Bangladesh, India and Pakistan, amounting to a record-breaking 90.4% of the gross tonnage dismantled globally.

The “worst corporate dumper” prize went to the South Korea’s Sinokor, which sold 11 ships for breaking on South Asian beaches last year, with Herbjorn Hansson’s NAT in second spot for the $80m his company pocketed from selling eight ships for scrap, some sales of which prompted Norwegian pension fund KLP to blacklist the company.

“The figures of 2018 are shocking. No shipowner can claim to be unaware of the dire conditions at the beaching yards, still they massively continue to sell their vessels to the worst yards to get the highest price for their ships. The harm caused by beaching is real. Workers risk their lives, suffer from exposure to toxics, and coastal ecosystems are devastated,” commented Ingvild Jenssen, founder of the NGO Shipbreaking Platform.

The NGO’s annual report also looked at what it described as the “murky practices” of sending a vessel for scrap whereby ships are often reregistered to flags of convenience for their final voyages in order to take advantage of what it described as “light regulatory burdens”. The flags of Palau and Comoros were the two biggest beneficiaries from this so-called end-of-life reflagging (see chart below). 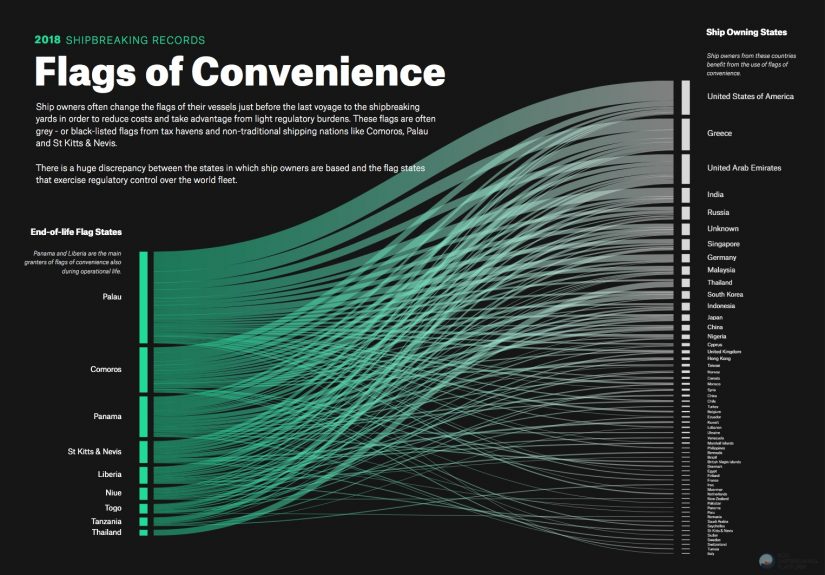