Refining capacity continues to be the link between crude and products tanker trades, since both sectors depend on the health of this industry to drive cargo demand. Refining has continued to migrate east. In its latest quarterly tanker market report MSI notes that the Middle East and Asia currently comprise about 44% of global capacity. That is up from 37% 10 years ago and MSI expects this to reach 48% by 2025.

This trend is illustrated in Chart 1 (2G), which shows regional changes in capacity. And while Asia and the Middle East dominate the outlook, growth in the Americas has slowed to a trickle while Brazil’s ambitious plans have collapsed amid corruption scandals and economic miasma. 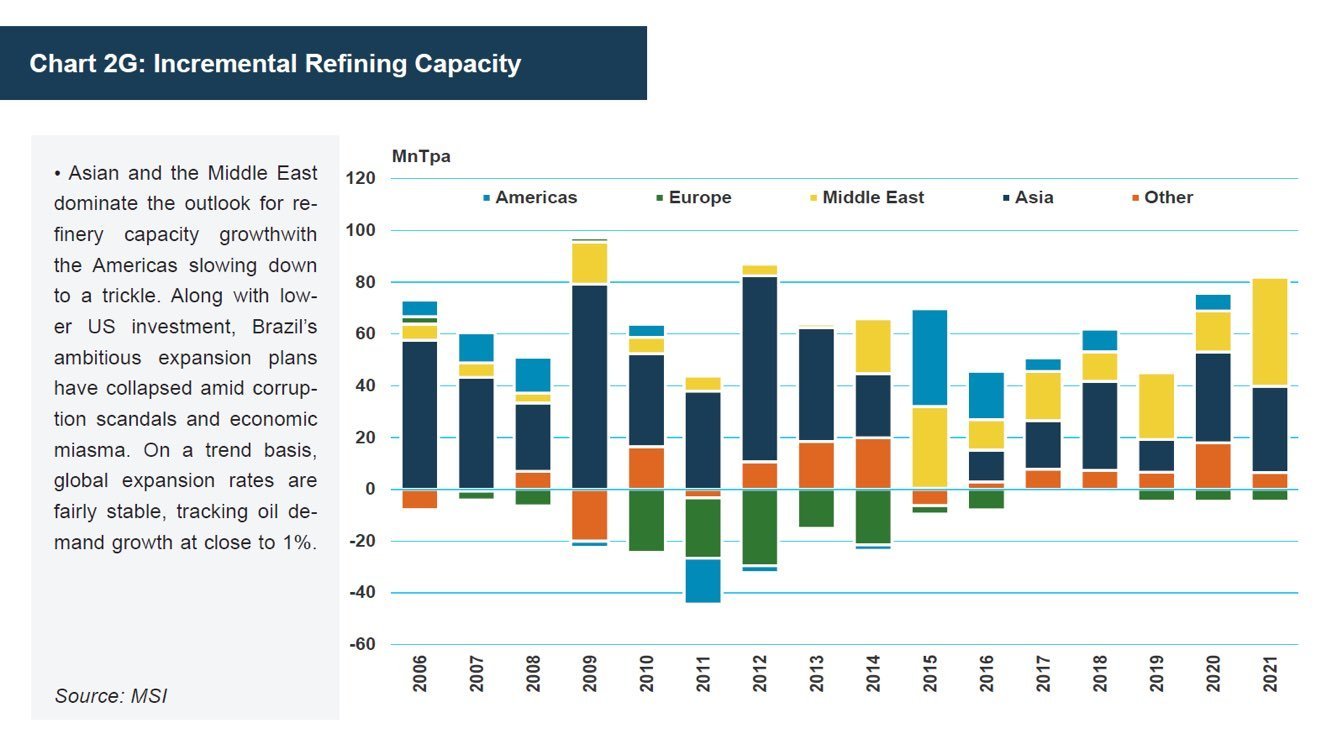 As can be inferred from the chart, on a trend basis, global expansion rates are fairly stable, tracking oil demand growth at close to 1%. Two points could be noted here. The first is that there is relatively little on the negative side of the ledger.

Capacity reductions in Europe have been tempered, as activity here has slowed when benchmarked against other forecasts such as the IEA. However, this implies the risk to our forecast for European capacity is on the downside and we could see a steeper decline in this region if conditions deteriorate substantially.

The second is that oil demand is increasingly being met with products that do not run through the typical refinery chain. NGLs, biofuels, gas-to-liquids, coal-to-liquids and direct crude burning all meet demand without requiring full or any refining.

These sources are only likely to increase over time, both reducing the ‘market share’ of crude oil refining and having a potentially negative impact on oil tanker trade.

For crude tankers Chart 2 (2H) gives a good indication of MSI’s overall expectations for trade growth in the near-term. The aggregate position looks weak in 2017, although not greatly changed from our previous forecast.

An upward revision to 2016, driven by higher US crude imports, helps overall trade levels. Further out, we do expect an improvement in growth in 2018 but increased expectations for ‘unconventional’ production has tapered our expectation for global crude refinery throughput over the medium/long-term.

For products, the prognosis is similar, although the outlook is somewhat more buoyant in the medium-term. Low trade growth in 2017 remains central to our forecast, strengthening beyond that. In part, this is dependent on a drawdown in stock levels.

It is also supported by regions with limited refinery capacity growth. Latin America, Africa, SE Asia and Europe all fit into this band since the products market is a more diversely driven sector than crude, which is highly dependent on Asia.

Chart 3 (2I) shows the MSI forecast by region. 2016 and 2017 are expected to be subdued. Growth this year will be limited across a range of regions as stocks remain at stubbornly high levels. US gasoline inventories have been at comparable levels to 2016 across H1 17. 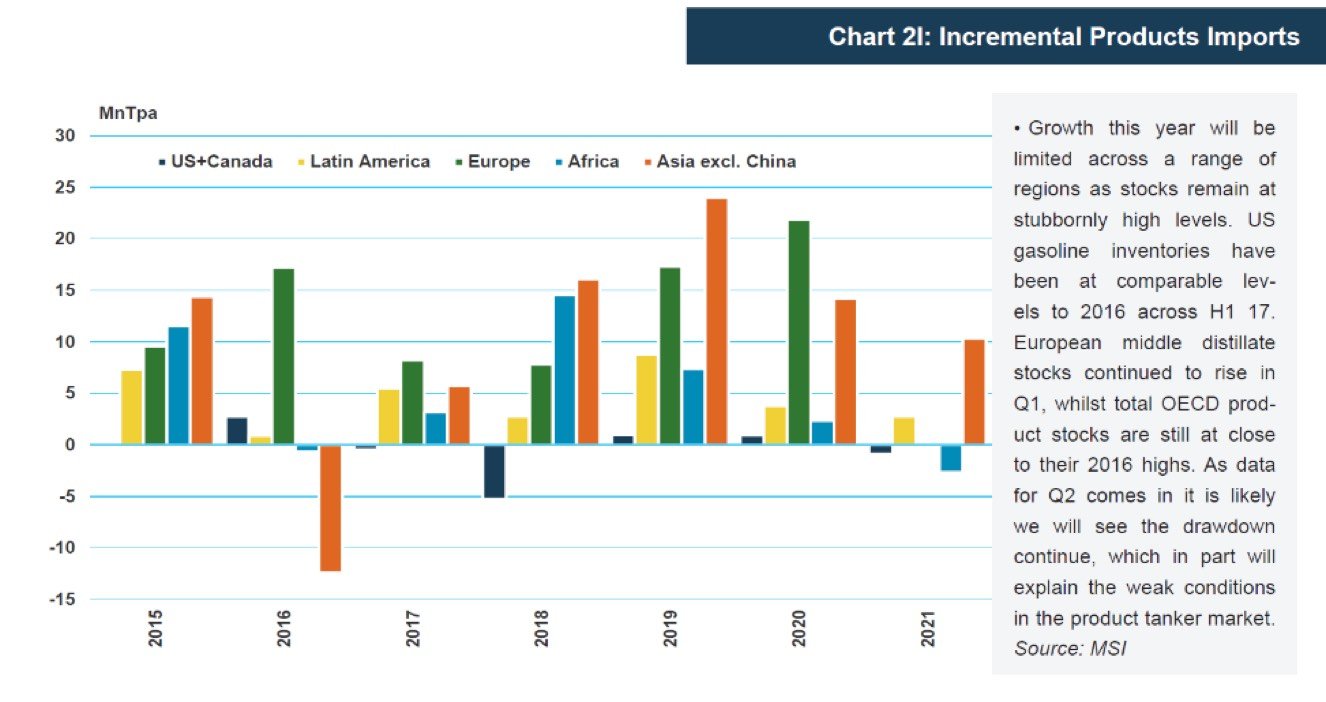 European middle distillate stocks continued to rise in Q1, whilst total OECD product stocks, whilst drawing in Q1, are still close to their 2016 highs. As data for Q2 is released, it will likely show drawdowns to continue, which in part will explain the weak conditions in the product tanker market.

As we move into 2018 we expect a number of factors to support trade growth. One will be improved macroeconomic conditions in regions such as Africa and Latin America, boosting oil demand growth and driving up products import requirements in these refinery-short regions. Our near-term outlook for African product imports is improved by pushing back the Dangote project but in the longer-term this does act to curb growth.

Asia and Europe are central to our product trade forecast. In Europe, we see limited near-term gains as high stocks limit upside. Further out we become more positive, as refining capacity continues to erode (as mentioned, we have reduced the pace of this decline but further major closures could degrade the trajectory and lift our product import projection). In Asia, growth is coming from SE Asia primarily, supported by India. North Asian products imports (Japan, South Korea, China) are expected to be Stable, but with limited upside.

The rise leading up to 2020 is supported by the IMO bunker regulation, which we expect will require substantial redistribution of MGO, particularly into Europe. The tanker market could further benefit from the logistical upheaval this will entail, with offshore storage potentially increasing to support local product availability.

The overall trend in our products trade story, as shown in Chart 4 (2J) – which looks at aggregate seaborne products trade – is another year of low growth in 2017. This has been revised lower in this update, but on a more positive note, our revival in growth in 2018 and 2019 is strong and sees higher rates, particularly in 2019 versus our previous forecast. 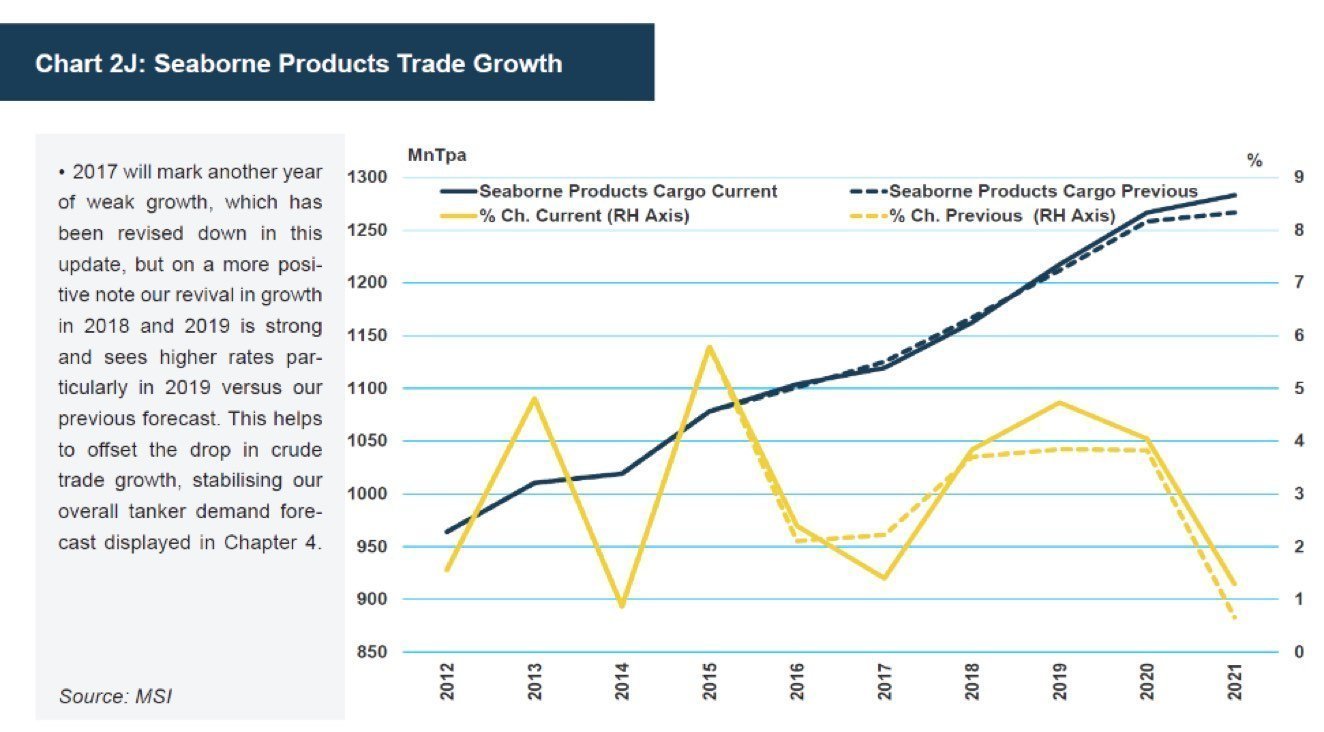 Capturing the diversity of refined products trade is difficult. MSI’s products trade data currently looks at trade in aggregate, taking all refined products bundled together. This is useful for determining overall shipping demand but requirements for more granular data continue to grow as the complexity of the market increases.

A preliminary data set covering products trade by type is shown in Chart 5 (2K). This shows total trade (including overland) and provides a starting point for enhanced coverage. We can see from the chart that the proportion of fuel oil in the global trade mix has been dropping, to close to 26% in 2016 versus nearly a third five years earlier. This is clearly good news for coated tonnage although clearly the influx in fleet supply and overall weak demand growth in 2016/17 have not supported rates in this sector. 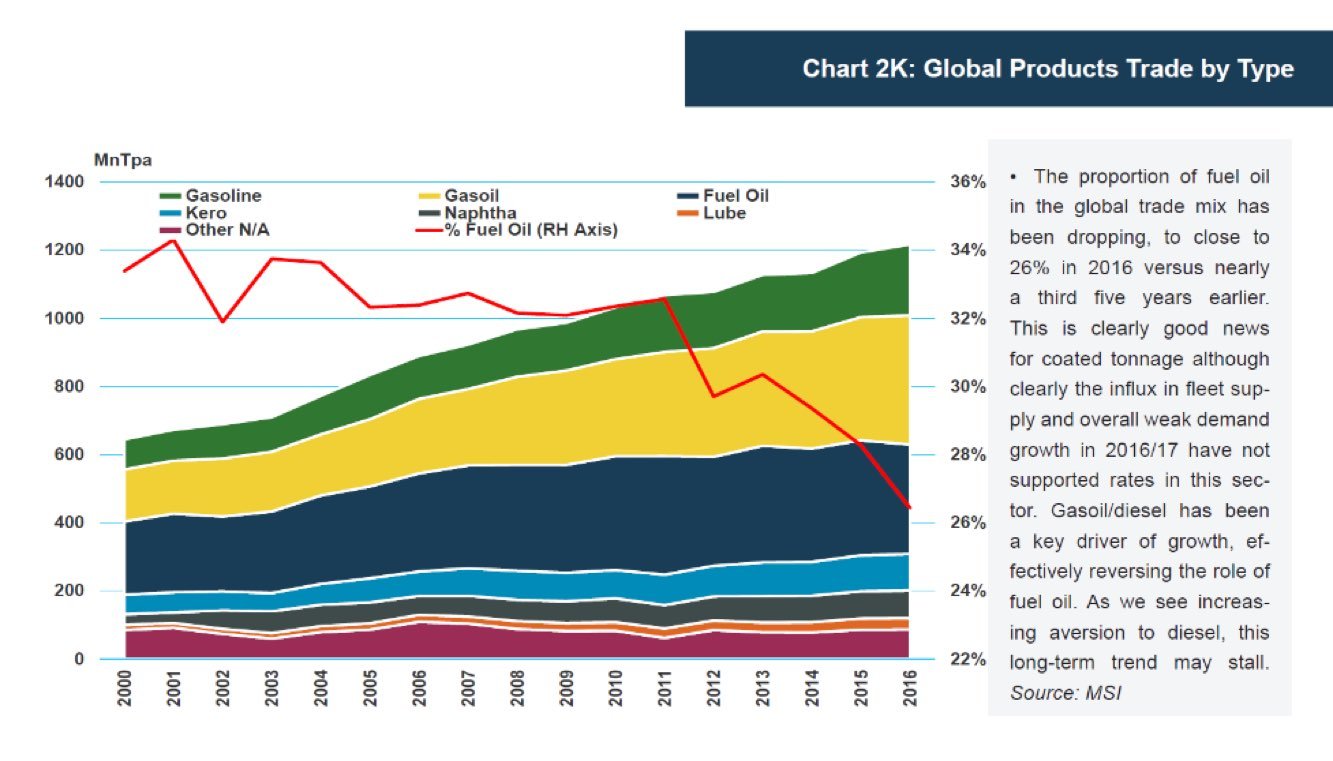 Gasoil/diesel has been a key driver of growth, effectively reversing the role of fuel oil. As we see increasing aversion to diesel in personal transport, this long-term trend may stall. Gasoline is likely to see a revival in relative growth and gain in market share, but the onset of new IMO bunker regulations in 2020 could herald a further surge in gasoil trade to meet emissions regulations.

Going forward, MSI will be building out the framework to forecast product trade flows by type and increasing coverage of the refining sector to facilitate this. Our aim is to develop comprehensive coverage of the products market to help owners and investors understand how the demand-side of this complex market is evolving, and relate this to changes in earnings and assessments of future growth.