Merchant shipping – the favoured playground of tycoons and totalitarian states alike, low profile to the point of shady, with assets crossing the globe often without the right checks and balances – all perfect fodder for the curious, hard-hitting, no-nonsense Maritime CEO journalist. But perhaps this beloved industry of ours – one that remains oblivious to the vast majority of the general public – lends itself as an extraordinarily rich seam of material to a thriller writer.

The fact is shipping-based thrillers have been thin on the ground and those that have dipped their toes into this niche have, more often than not, shown their nautical ignorance.

Step forward, Nick Elliott. The UK national is perfectly suited to adapt many of his experiences from a storied, exciting career in shipping into a series of fast-paced page-turners.

Elliott, who this summer retired after many years at Inchcape, has just published the second in his series of Angus McKinnon thrillers.

Elliott worked in international shipping all his adult life and handled dozens of claims, casualties and other assorted maritime mishaps throughout Asia, the East Mediterranean and the Black Sea. Many of these cases provide inspiration for his fiction series. He worked as an agent in Hong Kong and Tokyo for 20 years and Piraeus for a further eight. During the course of an interesting career he has been sent to the Pacific island of Nauru to quell fears of a typhoid epidemic; hid in a storm drain during an inter-gang shootout in Guam; investigated the theft of a cargo of ethyl alcohol in Georgia tracing both cargo and the armed gang of thieves to North Ossetia; and he oversaw the welfare, disembarkation and migration from Hong Kong to the UK of 1,002 Vietnamese boat people rescued by a British ship in the South China Sea.

“I began writing an account of some of the interesting events in my shipping career. As I did, the idea came to me of dramatising and embellishing them into a thriller,” Elliott tells Maritime CEO on the origins of his fledgling writing career.

Dark Ocean, launched over the weekend, is follow-up to the acclaimed Sea of Gold, published in 2014, centering on the dangerous adventures of P&I claims investigator Angus McKinnon.

A World War II wreck lies beneath the South China Sea. Is its cargo worth killing for? Angus McKinnon returns to the fray, assigned a cold case that’s heating up before he knows it.

In Hong Kong, a city of ghosts for Angus, a local shipowner and his beautiful daughter seek the marine claims investigator’s help.

Angus knows little of what lies behind their claim on a mysterious cargo lost when the Lady Monteith was sunk in the war. But when his friend and mentor is murdered while working on the case, and as Hong Kong is threatened with a catastrophic attack, he is drawn from the typhoon-lashed South China Sea to a secretive domain on the shores of Lake Lucerne before facing a violent denouement.

On how he goes about writing, Elliott says a daily routine is vital.

“While I’m actively working on a book I try to write something every day,” he says. “If I’m struggling I’ll often go for a walk along the coast or wherever I happen to be, and mutter ideas and notes into a voice recorder I carry with me. Walking switches on a creative side of my mind.”

Elliott is already sketching out plot ideas for a third novel in the series.

His work has already gained rave reviews. Craig Russell, award-winning author of the bestselling Jan Fabel and Lennox crime thrillers, comments: “Nick Elliott delivers in spades when it comes to fast-paced, intelligent, international thrillers. You feel, smell and touch every authentically crafted location; you’re expertly drawn into a maze of shadows and sinister organisations and characters where nothing is what it seems. This really is thriller writing of the highest calibre.”

Splash readers can buy Dark Ocean and Sea of Gold via this Amazon link. 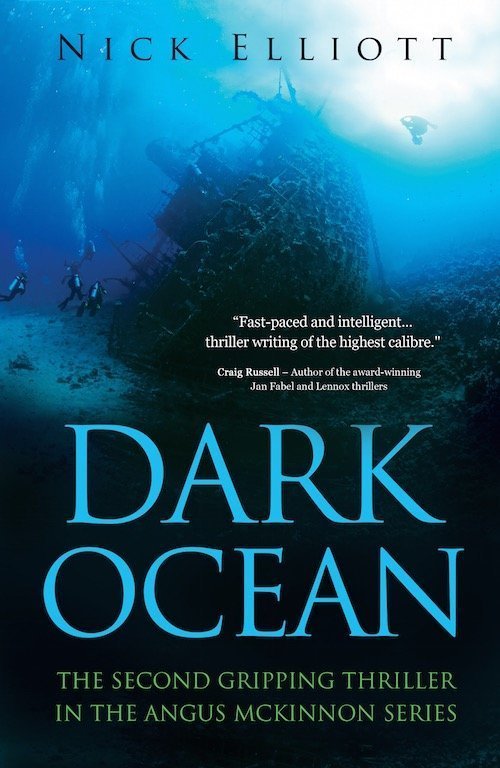