While the worst might have passed in terms of automotive consumer demand in Western countries, the pure car, truck carrier (PCTC) segment is coming to terms with what will be a very long, pronounced downturn with as many as one in three car carriers projected to be idled or laid-up in the coming months.

The March issue of Splash Extra quoted the director general of the European Automobile Manufacturers’ Association, Eric-Mark Huitema, as saying:“It is clear that this is the worst crisis ever to impact the automotive industry.” The ensuing two months have borne this statement out.

Stephen Gordon, managing director of Clarkson Research, told Splash today that last year the car trade reached 21.7m cars and his company is now projecting it may drop 34% this year to similar volumes as 2009. Clarkson port call data for car carriers are down 40% year-on-year at the moment. 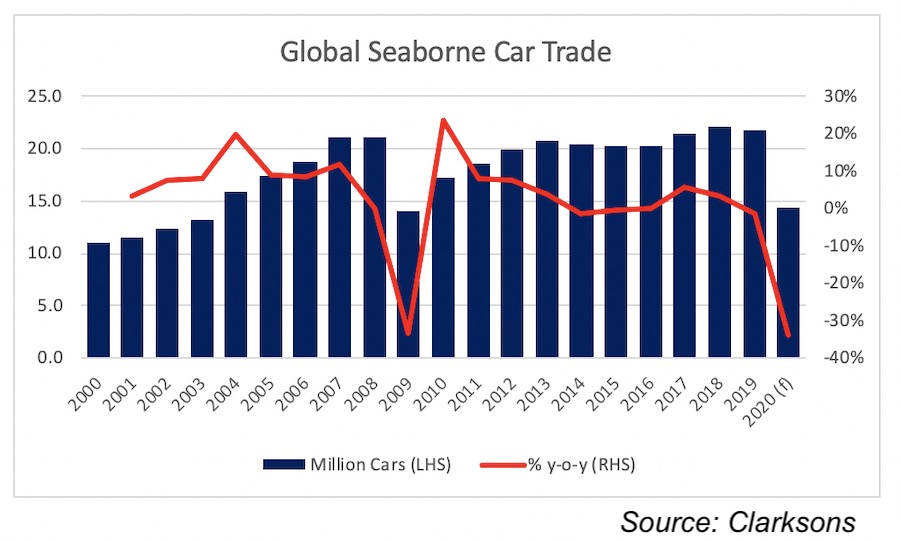 A coronavirus-themed survey carried on this site suggests readers believe car carriers will be the second hardest hit cargo shipping segment after containers.

“With the uncertainty that exists in the global market, consumers around the globe will avoid spending on anything which is considered as non-essential. Buying of cars will definitely be brought down in the list of necessity,” one reader wrote, while another pointed out: “Cars are more discretionary purchases.”

Estimates from Dynamar indicate that the idle car carrier fleet now stands at around 160 – 180 vessels of approximately 2.6m to 2.9m dwt or 20% to 23% of the fleet. Dynamar is projecting this figure to rise over the course of the next couple months as the congestion in the supply chain builds further with demand unlikely to recover in the short term. Dynamar believes that the idle and laid up fleet could rise to between 220-250 vessels and 3.8m – 4.5m dwt, approaching 30% to 35% of the current fleet. This figure is then forecast to drop towards the end of the year. Importantly for this hard-hit sector, Dynamar analysts are forecasting fleet growth to remain flat in 2020, or even experience a drop of between 1% to 2% if scrapping picks up.

Maritime Strategies International (MSI), meanwhile, is expecting global light vehicle sales to decline by 26% year-on-year in 2020, with total sales dropping back to levels last witnessed in 2009. MSI is forecasting deepsea car shipments to drop by 32% year-on-year. 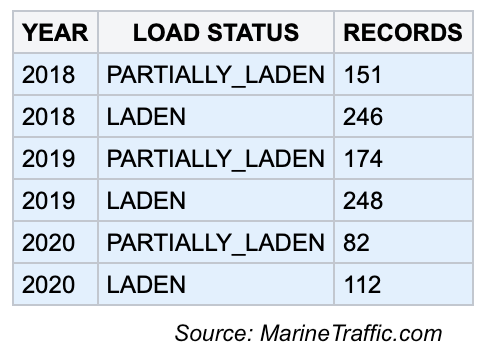 Nippon Yusen Kaisha (NYK), one of the big Japanese names in the PCTC sector, warned in a recent financial update: “In the car transportation division, cargo volumes rapidly fell from April, and a year on year decline of about 50% is expected in the first quarter. Based on an analysis of global vehicle sales and production trends, cargo volumes are currently expected to gradually recover from the second quarter, but the level of recovery will likely vary by country and region. Given this situation, consideration is being given to optimiSing the fleet, including the sale or scrapping of existing vessels.”

The moves toward a rebalancing are well underway, with leading PCTC operator Wallenius Wilhelmsen indicating as early as March that it could remove around 10 to 15 vessels from its trading fleet through a mixture of scrapping and lay-up. Additionally, a number of other operators have also cut sailings.

Commenting on the situation, Jonathan Mummery, a maritime analyst at Dynamar, told Splash: “The current situation makes for rough reading for the PCTC sector. In a market that was already suffering from overcapacity and with the latest figures from the auto industry indicating that global demand for new car sales is likely to fall by around 20%, the derived demand for the PCTC sector is likely to plummet to multi-year lows.”

Mummery suggested there would be regional variations as economies move toward a “new normal” at different times and speeds.

“The second quarter is likely to see the largest drop before some port backlogs start to clear and demand picks up somewhat,” Mummery said, adding the caveat that a second spike in the coronavirus could prove fatal for many car carrier operators.

One bright spot on an otherwise bleak outlook for the PCTC segment is the orderbook, which stands at just 25 vessels with an aggregate deadweight tonnage of 400,000.

New vehicle sales in the US are slowly recovering this month from their historic collapse in April due to the coronavirus pandemic. But they are still expected to be significantly down from a year ago.

Auto research firms forecast new vehicle sales to be slightly less than 1.1m vehicles in May, down about 32% to 33% compared with May 2019. That would be a roughly 50% increase compared with last month.

Despite this recovery automotive manufacturers are battening down the hatches, preparing for a prolonged recession. Nissan, for instance, yesterday announced it would be closing plants in Indonesia and Spain as part of plans to slash global production by 20%.

Global light vehicle sales declined by almost 30% year-on-year during the first fourth months of 2020, as the impact of Covid-19 reverberated around the world.

Asian markets collapsed first, with Chinese light vehicle sales down 80% year-on-year in February alone. Although it is still soon to call the recovery, there were glimmers of hope in April as both Chinese and Korean sales showed signs of normalising.

As the virus took hold of the rest of the world, the rout set in, with North American and European sales slumping by 50% and 74% year-on-year respectively in April, with the promise of more devastation to come in May.

Niklas Carlen from Maritime Strategies International (MSI) maintained that although the partial recovery in Asian sales offers some hope, he cautioned against positing a similarly swift recovery for Europe and North America.

“The draconian measures implemented to limit the spread of the virus within China and Korea have certainly contributed to the earlier-than-expected reopening – albeit partial – of their respective economies, but the threat of a second infection wave continues to linger. In contrast, the overall response of governments in Europe and North America can best be characterised as unstructured, uncoordinated and too little, too late,” Carlen reckoned. 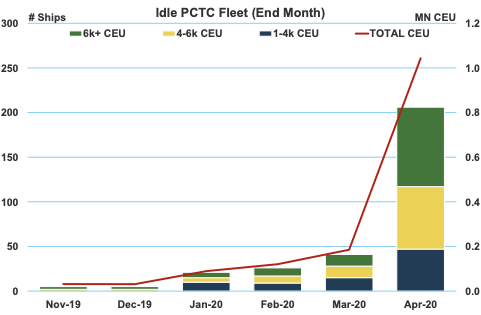