Should broadband be available to all at sea? Seafarers have their say.

Poor connectivity is the single largest factor disincentivising the best and brightest youth from espousing seafaring as a career.” That was the view of one seafarer in a poll carried by this title earlier this year. Similarly a survey carried last year by Futurenautics Research found 60% of seafarer respondents indicated that having broadband onboard ships affects their decision to join a company.

The problem is that seafarers’ bosses often to do not agree with this sentiment.

Maritime CEO holds regular lunches around the world with top shipowners. These behind-closed-doors events are a chance for owners to let off steam and speak freely; it’s all off the record. We regularly ask our guests of their views on broadband connectivity for all onboard and roughly 80% of attendees are against it, citing distraction, cost, and how it leads to greater loneliness, not less, for those out at sea.

This is not a view held by the majority in the industry – see the pie chart below from a recent poll we carried, open to all in shipping.

Maritime CEO interviewed seafarers from three different countries for their thoughts on the matter.

“In a world of modern gadgets and technology,” says Nikhil Salunke, a second officer for the past two years, “we seafarers are still deprived of certain things.”

Most ships, he says, are still without internet connections and this is something that has to change. “In the era of Skype and Facebook it is very difficult to live in isolation,” Salunke observes.

Quite so, agrees Dipyan Dutta, a third officer, and fellow Indian, who has been at sea for the past three years. He urges broadband on all ships so seafarers can stay in touch with their families.

Arthur Malapit, a Filipino second officer with four years experience at sea, argues that to be deprived what he calls “this basic human right” of being in touch with loved ones is patently wrong in the 21st century and is part of the reason for the constant concerns about a shortage of seafarers and officers to service the world’s commercial fleets.

Another third officer, also from the Philippines, Jan Ellin Palomar, who is soon approaching his second anniversary at sea, admits to great bouts of loneliness onboard ship, something that could be helped by being connected to the internet. “In a ship, there must be more recreation for seafarers,” says Palomar, “as we consider loneliness our greatest foe.”

All this interviewed called for a greater spend by owners and managers on recreational activities at sea.

This, says Dutta, should include the latest movies, table tennis and gym equipment.

These opinions are all from ‘millenials’ – people who have grown up with the internet at their fingertips 24/7. Not all seafarers are of this age range however and the one dissenting voice comes from Hong Kong.

“In the old days we used to play cards, mess together, and so on. There was a lot of contact between crew. There is less contact nowadays because people tend to go directly to their cabins when not working,” says one senior officer from shipping line Wah Kwong. 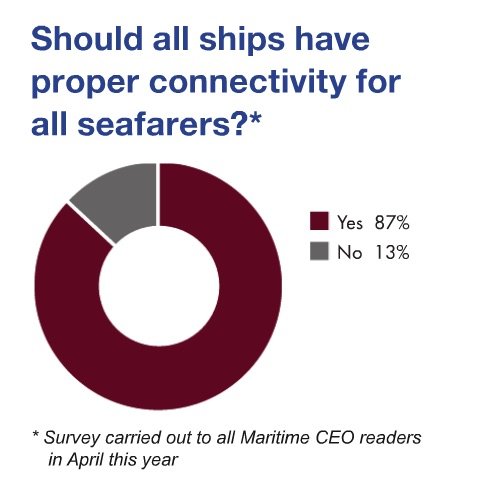 This article first appeared in a satellite communications special magazine for Maritime CEO published in association with Inmarsat. The full magazine, including the shipowners’ point of view, can be accessed for free online by clicking here.