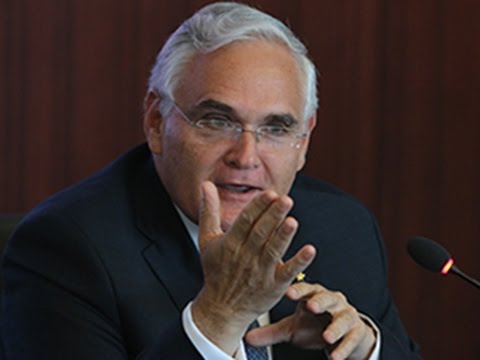 Athens: It was 41 years ago that Jorge Quijano joined the Panama Canal Authority as an engineer.

Back then the largest boxship afloat clocked in at 3,200 teu. On June 26, the canal will welcome the 9,400 teu Andronikos operated by China Cosco Shipping as the first ‘neopanamax’ to cross the expanded waterway – a very significant moment in world trade (and in shipping lexicology), and one that has been nine years in the making.

Quijano is in Athens this week for Posidonia. He’s also at the Greek capital so that he can board the Andronikos in Piraeus this Saturday and wish the captain and crew all the best as the ship departs, crosses the Mediterranean and then the Atlantic on the way to making maritime history in 17 days time.

The expansion – which has been dogged by cost overruns, delays, and accidents – is, according to Quijano: “A major step in reasserting our presence.”

The administrator of the Panama Canal Authority explains his waterway has seen “a drift” of its trade to the Suez Canal even though that takes 15 days longer. This tonnage soaking maneuver by the world’s leading liners has taken away some of Panama’s growth in recent years.

“Now we will be able to compete on a more even ground,” Quijano says.

Container shipping will continue to account for the lion’s share of the canal’s business as evidenced in the fact that 112 of the 119 reservations in the coming three months are boxships, but other trades should change too. The other seven reservations for instance, are VLGCs. “LPG owners are switching immediately to larger ships,” notes Quijano.

In dry bulk, Quijano reckons the wider locks will allow Louisiana grain exporters to be able to compete with Argentina and Brazil exporters going forward, while he anticipates car carriers of up to 8,000 ceu to transit the waterway by next year.

While there has been no LNG ship reservations yet, Quijano is confident the first will be inked as early as August once Cheniere’s LNG facility gets going. “LNG is a new business for us. It is also a new opportunity for the US to be competitive in selling to Asia, a market previously held by Qatar,” predicts the Panamanian.

As Panama gears up for its huge party to welcome the Andronikos, talk of a rival Central American waterway has gone quiet. Beijing telecoms tycoon Wang Jing’s plans to build a canal through Nicaragua have cooled. Panama sends a team to Nicaragua regularly to check out what is happening on the ground. It seems Wang’s own financial problems, combined with fierce environmental opposition to the construction, have at least delayed any canal.

“We feel there is not enough business for two canals,” Quijano says, “and so it would not be a good investment.”

Besides, it’d be cheaper and easier just to expand the Panama Canal again if necessary, Quijano insists. “Demand will dictate when we build the next set of locks,” the veteran canal man concludes.