Maritime CEO assesses the mindset of a Greek shipowner, and why this nation is so good at getting shipping cycles right.

A survey carried on the back page of this magazine shows readers overwhelmingly believe the Greeks are the best at reading shipping cycles. Among the top 10 shipowning nations, Greece garnered 64% of the votes.

“It’s obvious — they actually are shipping professionals and not finance professionals — they know how to weather the storm better than most,” one reader responded.
So what is it that sets the Greeks apart – and has let them continue to have the largest commercial fleet in the world for so long?

David Glass, the Athens-based editor of Newsfront Shipping Publications, says the ability to read cycles comes down to the fact that the Greeks tend to be family businesses that are generations old.

“They don’t see shipping as a way to make a quick buck,” Glass says. “They don’t look at the bottom line all the time, the majority are not listed, they just have to keep their mothers-in-law and uncles happy. A lot of decisions are taken around the family lunch table on a Sunday.”

Greeks owners tend to go with a gut feeling, not bound by government targets, and importantly as they are brought up in the business they have a strong operational understanding of the business, Glass adds.

Esben Poulsson, the chairman of the International Chamber of Shipping, who also works for a Greek owner, Enesel, observes: “It is in their blood as the saying goes.”

He elaborates: “Greek shipowners focus on the fundamentals, and trust their instincts – more than they do research and statistics.”

Wily Greek owners have made the most of the changing cycle in the past 18 months with secondhand ship prices starting to climb, especially for bulkers. Greeks accounted for almost one in four secondhand ship purchases last year, pouring $4.5bn on used vessels in what was a record year for S&P.

Many of these ships have since entered the Liberian Registry’s books. Scott Bergeron, the CEO of the flag with the largest Greek fleet, tells Maritime CEO: “Judging by the S&P activity and consistent fleet growth, it can be fairly stated that the Greek shipping community has done well taking advantage of the prolonged downturn. As is widely recognised, the strength of the Greek shipowners’ acumen is to assess the opportunity and to strike promptly to realise the gain. Paralysis by analysis does not exist in Greek shipping.”

Greek owners’ notable fleet build-up from 2016 to the present is set to pay off handsomely, maintains Court Smith, an analyst at online pricing vehicle, VesselsValue.

“All shipping segments should see upwards pressure as recycling intensifies ahead of the 2020 bunker fuel switchover, and the fleet under control of Hellenic owners should see asset value gains to the upside,” Smith says.

“Many private Greek shipowners have two things that many owners and investors would give their right arms for: time and yet more time,” says Dr Adam Kent from analysis firm Maritime Strategies International (MSI).

This, coupled with a commitment to the industry and deep pockets mean that they are often ideally positioned to ride the shipping market cycle without getting too distracted by short term volatility or external shareholder demands.

Of course, those Greek owners that have been behind lucrative asset plays tend to stick in the memory. However, there are also a wealth of owners who have bought at the wrong time in terms of the market cycle, MSI’s Kent points out. The first half of 2014 saw bulker prices peak but nevertheless Greek owners dominated S&P activity buying at the market’s zenith, with many no doubt wishing, with hindsight, that they’d kept their powder dry.

Another advantage bestowed on the Greek ship owning community is its breadth and depth; in effect it becomes a numbers game, Kent argues.

“With a myriad of Greek owners prevalent across a range of sectors, someone at some point is going to hit the asset play jackpot, which again becomes lodged in the industry’s collective psyche,” Kent says.

Dagfinn Lunde, a columnist for this magazine and a famous name in ship finance, agrees with Kent on the importance of the mixed fleet element, as well as Glass’s earlier comments on just how close Greek owners are to the actual business of running a fleet of ships.

“It’s down to a combination of the structure of the fleet and the people behind it,” Lunde says, adding: “There are very few places in the world where you can sit with an owner and he knows exactly where his ships are trading and what challenges they are facing. They have seen and been through so many cycles.”

One thing is for certain: Greek owners will continue to shape the S&P markets for years to come, often dismissing other nations’ increasingly algorithmic approach to asset buying. There will naturally be winners and losers but with many sectors now climbing out of recent cyclical lows, expect to hear more about the Greek winners over the next couple of years.

This article first appeared in the latest issue of Maritime CEO magazine, which is being distributed across many events in Greece this week. Splash readers can access the full magazine for free online by clicking here. 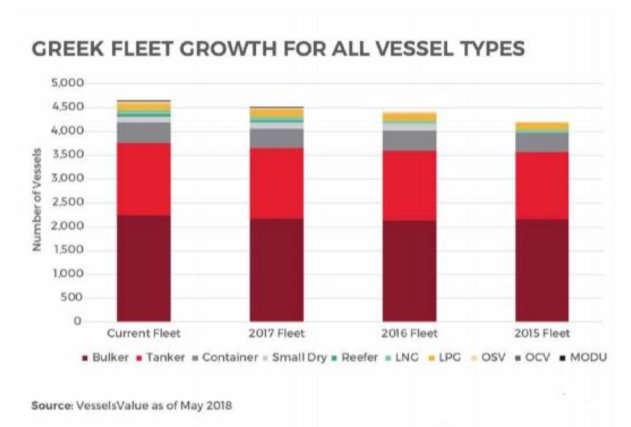