London: Gener8 Maritime has been the most aggressive player in the second hand market in the year to date, according to data compiled by UK online pricing platform VesselsValue.com. The Peter Georgiopoulos led tanker player splurged $1.4bn on 14 vessels in the first half, a period that ended with the company completing an IPO in New York.

In second place in the first half of the year was Malaysia’s MISC, which spent $1.07bn on five vessels. From third to fifth spot were Euronav ($776m; eight vessels), Ship Finance International ($566m; 11 vessels) and Sinokor Merchant Marine ($402m; 10 vessels).

The sale and purchase market in 2015 has been busy, especially for tankers, which have confounded the analysts and gone on a strong run. However, shipowners regularly tell Splash that decent quality tonnage is hard to find.

Commenting on the figures, Richard Rivlin, the chief executive of VesselsValue.com, told Splash: “‘Peter Georgiopoulosis is famous for big deals, and Navig8 have come out of nowhere and also done a series of big deals. By teaming up and creating Gener8, they have created a deal making giant.” 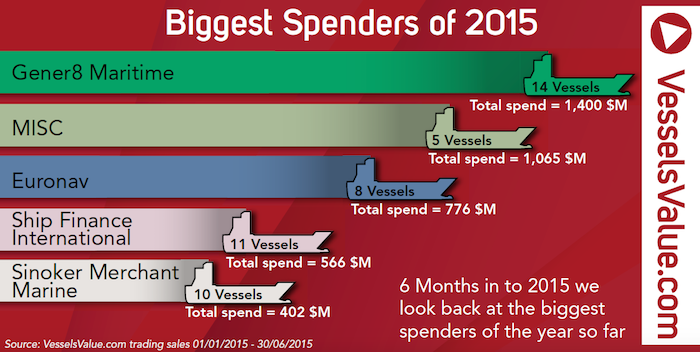 Splash Extra: Boxships, charters, and what happens as the sector unwinds

Splash Extra: Boxships, charters, and what happens as the sector unwinds