In a letter seen by Splash, PIL management writes: “Claims from several internet reports that the company is going to apply for bankruptcy are fake information and have severely damaged the company’s reputation and the company will reserve the right to take legal actions.”

The financial health of PIL has been the source of much conjecture of late with ships being detained and late charter and bunker payments all making headlines. The privately held Singapore liner quit the transpacific tradelane last month, having exited the Asia-Europe trades in April last year. It has also sold its stake in Pacific Direct Line (PDL), which operates in the South Pacific as well as selling four of its largest ships. Singamas, the Hong Kong-listed box manufacturing subsidiary of PIL, revealed last month PIL owes it $147.7m, a majority of which is overdue.

The bankruptcy rumours surrounding PIL in China echo a similar case four years ago when reports emerged in September 2016, claiming Japanese shipping giant Kawasaki Kisen Kaisha (K Line) was on the brink of collapse. The rumours, it emerged later, came from a number of emoployes at APL Logistics. K Line responded, filing a lawsuit in Tokyo, demanding damages from APL Logistics and its parent, Kinetsu World Express, reaching a settlement in July 2018.

“As the epidemic prevention and control in China is heading to the positive direction, all of the group’s branches in China have resumed operations from March 9 and shipping operations are proceeding orderly,” PIL said in its note posted on Friday. 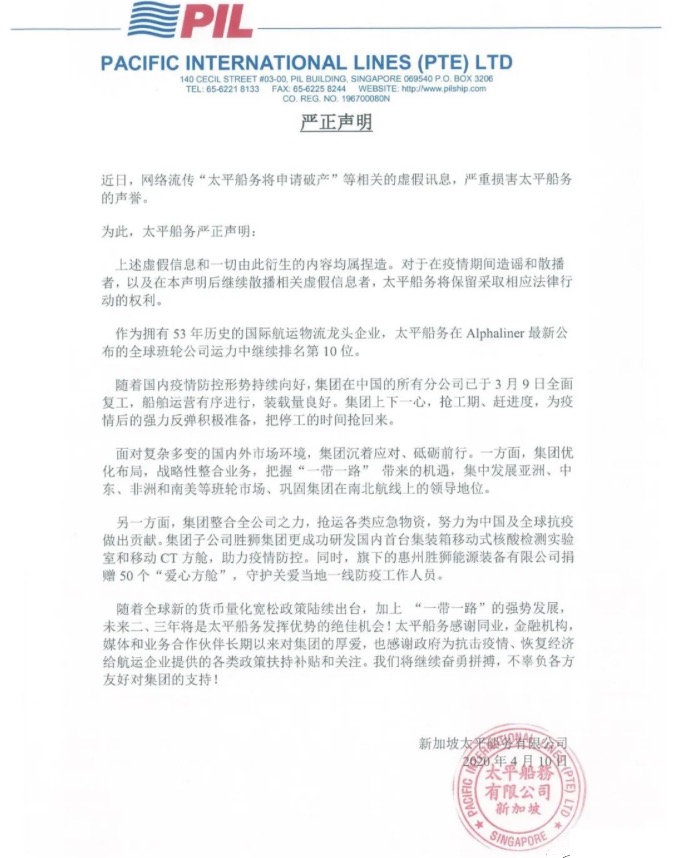