Is the Singapore Exchange paying over the odds to buy out the 272-year-old Baltic Exchange?

The $103.5m offer made last week has been labelled “rather expensive” by one Singaporean analyst.

Ling pointed out that the Intercontinental Exchange (ICE), by way of comparison, trades at 20x FY16 consensus earnings with a FY2015 bookvalue of 2.2x.

Ling also hit out at what the Baltic will actually bring to SGX’s bottom line. The London institution managed a net profit last year of £1.34m on revenues of £6m, paltry in comparison to SGX’s S$349m ($260m) net profit.

SGX’s offer will be put forward to the Baltic’s 380 shareholders next month.

The DBS report follows on from a survey carried on this site two months ago, with more than 500 respondents, which indicated that the Baltic Exchange was not as relevant today as it was 20 years ago. 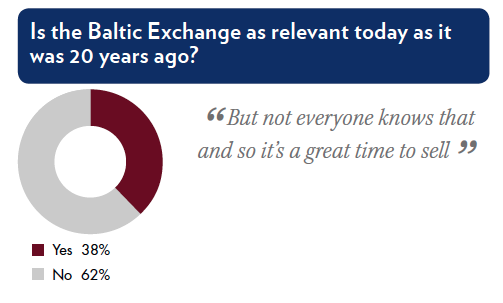