The container shipping industry is facing up to acute shortages of boxes at ports in Europe and North America, a situation that could worsen in the coming weeks.

Data from Hamburg-based Container xChange, an online box repositioning platform, shows that thanks to the coronavirus and record numbers of blanked sailings storage yards at Chinese terminals are overflowing with steel boxes, while equipment is running down at major ports elsewhere.

Container xChange, launched in 2018, runs its own Container Availability Index (CAx), which forecasts supply and demand in container logistics for most of the biggest port locations for the coming three weeks. In Shanghai, there are 47% more containers in port for week 10 of the year compared to the same period last year, while in Hamburg there are 33% less the same period last year with the situation even worse at key American locations such as Los Angeles and Chicago.

Despite clear signs that Chinese ports are getting busier for a variety of commodities, the number of boxes waiting to be offloaded at Chinese ports continues to climb, according to the latest data published today by Capital Economics (see chart below). 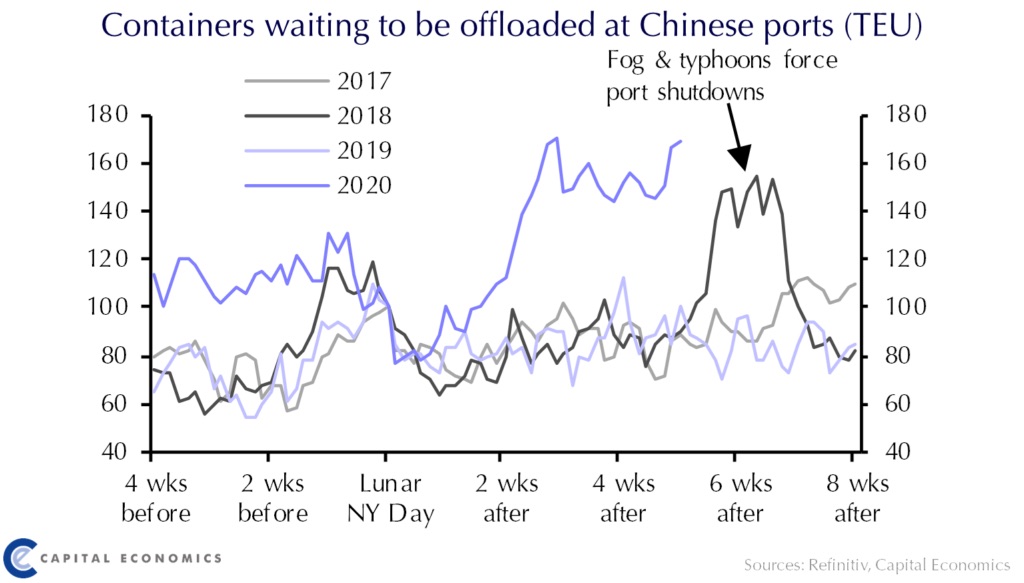 “Usually, it’s the other way around, but now we have a deficit of containers in North America and Europe,” a spokesperson for Container xChange told Splash, adding that the situation was likely to worsen in the coming days.

Equipment imbalances and empty container repositioning is a problem that typically costs the industry $20bn every year, a figure likely to be much higher in 2020, adding to already stretched balance sheets for many liners with shippers braced for inevitable surcharges.

Lars Jensen, a container analyst at Sea Intelligence, told Splash today: “Shortages are a very real likelihood. The challenge for the carriers is that given the many blank sailings they need to prioritise their backhaul vessel capacity – either low-paying backhaul cargo or efficient movement of empty equipment,” Jensen said.

Jensen suggested that given the outlook that China might get back in gear in the coming weeks, the carriers will likely prioritise repositioning unless back haul shippers are willing to pay higher rates

Alphaliner analyst H J Tan argued that it is not so much a shortage of container equipment that will be the main problem, but rather a shortage of slots on backhaul sailings that will start to hit US and European ports in the coming weeks.

“It will be a repeat of the situation in April 2017 when Europe eastbound rates doubled,” Tan predicted.

Peter Sand, chief shipping analyst at BIMCO, cautioned that the repositioning situation might not become such a huge headache.

“The fact that backhauls are often less time sensitive and lower valued cargoes, this should not become a massive problem,” Sand maintained, adding: “But we still need to see more boxes leaving China soon, in order to avoid a shortage in Europe and North America that would otherwise come around in four to eight weeks.”

It is not just standard containers that are causing supply chain headaches for liner planners with the situation far worse for reefer boxes.

Many lines in recent weeks have warned about reefers piling up in Shanghai, Tianjin and latterly Ningbo.

Maersk in a recent customer advisory warned that the reefer situation is worsening, and its reefer surcharge has been expanded to include Ningbo, the world’s largest port.

“The plug shortage in Shanghai and Xingang [Tianjin] has not improved in the latest weeks and, indeed, it has been worsening also in surrounding ports. For that reason, we will be expanding the scope of the congestion, adding also Ningbo,” Maersk said in a customer advisory.

“We recommend customers, when possible, to ship to other Chinese destinations or other markets in order to avoid the congested ports. This recommendation is in particular for transit time-sensitive, perishable, chilled commodities with a limited/short shelf-life, eg fruit/vegetables and frozen meat,” it added.