The father and son in charge at Germany’s Reederei NSB are the cover stars of the latest issue of Maritime CEO magazine, which launches today in time for distribution across the many events taking place during Hong Kong Maritime Industry Week.

As well as profiles of many top names in shipping, the magazine features expert analysis on the various shipping sectors, a feature on the alarming rise in cases of crew abandonment, plus plenty of more recreational articles such as a travel guide to Macau, what Christmas wines to buy, what books to buy to get a better idea what’s happening inside Xi Jinping’s China.

There’s no mistaking that the dire year for container shipping has made life difficult for the Ponaths, the cover stars of the latest issue. The saving grace for Helmut and Tim – father and son and CEO and COO respectively at NSB – is their diversification, and also their keeness to innovate their way out of trouble.

Take, for instance, last year’s decision to set about widening a series of panamax boxships.

Seeing the impending crisis for this sector ahead of others, the Ponaths completed a world-first ship widening project in early 2015, giving one of its ships an extra 20% of container capacity. , extending its capacity from 4,860 teu to 6,300 teu over a four-month period, upping the ship’s price tag by a tidy $10m in the process, according to online pricing platform VesselsValue.com. NSB has since widened two other vessels in its fleet.

“Many panamaxes may be closer to the scrapheap than to the open sea,” concedes Tim Ponath.

The widening of three NSB ships, he says, has given them a future. Moreover, doubling their reefer capacity has made them more attractive.

His father, Helmut, says that while the widening process clearly shows positive financial gains, it’s been tough persuading fellow owners to sign up.

“Unfortunately, the level of charter rates in this segment sharply collapsed,” says the shipping veteran. Nevertheless, Helmut says NSB is currently in negotiations with two well know liner shipping companies regarding the widening of panamax vessels.

Another area of innovation being touted by NSB is in LNG-driven boxships. The company now has complete specifications on its shelves for LNG-fuelled boxships ranging in size from 1,400 to 5,000 teu.

The folk at NSB love technical firsts – another of which took place recently in the Mediterranean where a sea trial managed what is described as a radical derating whereby a ship with a 12 cylinder main engine was operated with only six cylinders. This efficiency-enhancing measure will be offered to clients soon.

NSB is one of the leading providers of tramp tonnage in the container segment with a fleet in excess of 60 ships ranging in size from 1,000 to 11,000 teu. In addition, it managers tankers as well as jack-up rigs and can count as one of Germany’s very largest shipping companies.

Tim is quick when quizzed about the box trades to hit out at the poor predictions from analysts. 2016 has turned out to be arguably the most tumultuous year in container shipping history, not that most of the so-called experts saw it coming, he says.

“Was this not the year when the shipping markets were supposed to have finally recovered, after a slightly upward trend at the end of 2014 and a stable market in 2015?” he muses, smiling.

Nevertheless, the horror show that has been 2016 should mark the nadir to this particular cycle, Tim hopes.

“I personally assume that rates have reached a level which will not decrease further significantly,” he tells Maritime CEO.

Then there is the constant refrain about how size matters in container shipping, something that also irks Tim. While acknowledging that many German small companies have gone to the wall, the fact, he says, that South Korea’s Hanjin Shipping, the seventh largest containerline in the world at the end of August, has filed for bankruptcy shows how difficult it is to survive. He points to the recent news that the three Japanese majors – NYK, MOL and K Line – are merging their container divisions as a sign of just how serious the downturn has become.

While the container operating side of the business has been harsh for NSB this year it has worked hard to boost revenues from its shipmanagement side, which has seen it take on management of 12 boxships in 2016 to date with more to come. Three tankers are also set to deliver soon and be managed by NSB.

“In general, diversification into different sectors has been pushed forward,” Tim says.

Apart from traditional shipmanagement and newbuilding supervision services, the portfolio of the corporate group comprises crew management, technical consulting, spare parts, a simulation and training centre, and commercial management services. The companies of the NSB Group can be found at 10 locations spread all over the globe. They have a combined workforce of 240 shore staff and 1,700 seafarers from twelve nations.

Were it up to Helmut, there’d be plenty more Germans employed but continually his pleas to the government in Berlin on making the German flag more competitive have not quite been met.

NSB has been harassing the Merkel adminstration for a long time on the inadequacies of the local register.

As Helmut recounts, it was only after the announcement of NSB’s successive outflagging of 38 German flagged containerships that murmurs could then be heard in government circles. One year after this reflagging announcement and regulations began to change, first with a relief from 100% taxes on wages and to German manning regulations.

Despite this change, there’s plenty more Helmut would like Berlin to do to help out the local shipping scene, for instance when it comes to the offshore segment where the new regulations mentioned above do not apply.

“It would be sad if we gave away this field to other nations as well,” Helmut says, adding German firms have great potential to be leaders in the offshore wind sector if regulations allow. 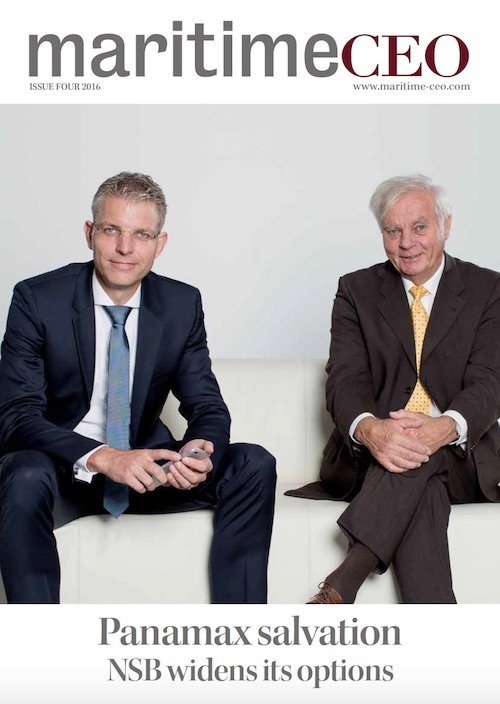