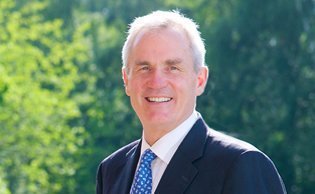 Hong Kong: One of the best known names in Hong Kong shipping circles is taking on a very different role, but stresses to Maritime CEO that he is not quitting maritime by any means. Richard Hext, the non-executive chairman of Univan Ship Management, has been appointed group chief executive at the UK’s University of Central Lancashire (UCLan), starting next month.
Hext, 56, started his career in shipping in 1975 as a labourer at Scotts of Bowling, a Clydeside shipyard. His recent roles in shipping include five years as deputy chairman and subsequently chief executive at Pacific Basin Shipping and 22 years with John Swire, a major UK-owned, Hong Kong-based conglomerate. In 2010 Swire invited him to rejoin the board of China Navigation, its shipping subsidiary, as a non-executive director.
Hext recounts how he was called by a headhunter for the university, now the UK’s eighth largest tertiary education institution. “Not everyone in their mid-50s gets a chance to start a new career,” he says.
“I love shipping very much and have been in it for 40 years, but my family has always been passionate about education,” he says, stressing that he has no intentions to sever his links with shipping.
It’s been five years since Hext came in to run Univan in the wake of its founder, Capt Charles Vanderperre’s death. When Hext joined the shipmanagement firm it had 39 ships. He sought out well regarded shipmanagement leader Bjorn Hojgaard to run the firm as ceo and since then it has gone from strength to strength and now has a managed fleet of 112 ships.
“I am still extremely positive about shipmanagement,” Hext says.
Hext will retain his existing non-executive board appointments and is a member of the Hong Kong Advisory Board of Stanford University’s Graduate School of Business. [26/08/14]