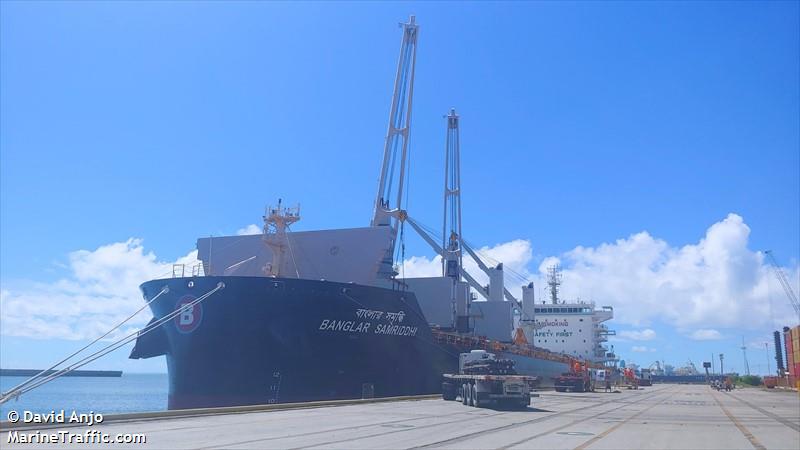 in Ukrainian waters. The ship has been stranded at Olvia port on the Black Sea since Russia invaded Ukraine eight days ago.

The deceased was the ship’s third engineer, Hadisur Rahman.

The rest of the crew survived and were able to extinguish a fire that broke out on the ship.

The ship looks like it was caught in the cross fire as Russian and Ukrainian troops exchanged fire over the Southern Buh river.

Two other bulk carriers and a chemical tanker have also been struck by military fire in the opening days of the conflict and there have been reports of other merchant ships being detained by Russian forces.

International Maritime Organization secretary-general Kitack Lim repeated over the weekend his message to keep seafarers safe from the conflict.

“Shipping, particularly seafarers, cannot be collateral victims in a larger political and military crisis – they must be safe and secure,” Lim said.

The Joint Negotiating Group (JNG) and the International Transport Workers’ Federation (ITF) yesterday designated areas in the Black Sea and the Sea of Azov as Warlike Operations Areas triggering an increased security level and other entitlements for seafarers in the war zone.

The areas designated cover the Sea of Azov (north of latitude 46°N), the Northern Black Sea Region and all ports in Ukraine. Under this classification seafarers onboard IBF covered ships are entitled to receive: bonus equal to basic wage, payable for five days minimum plus per day if longer; doubled compensations for death and disability; right to refuse sailing, with repatriation at company’s cost and compensation equal to two months basic wage.

For all the news on how the invasion of Ukraine is affecting global shipping, check out Splash’s dedicated coverage here.