Paris: It was with The Spy Who Loved Me that baddie lairs reached their absolute peak in the James Bond series. Carl Stromberg’s underwater submarine-catching home met a typically fiery end but something even more futuristic is being pitched to investors around the world.

SeaOrbiter is the culmination of more than 30 years of research by French architect Jacques Rougerie (an acquaintance of Jacques Cousteau) dedicated to the exploration of the undersea world. If funding comes in, it will be the only vessel in the world allowing a 24/7 exploration on long-term missions of the open sea.

The technical characteristics of this 58 m high platform – of which 37 m are immersed in the water – give the crew the opportunity to live 24/7 above and below the ocean surface for long periods. 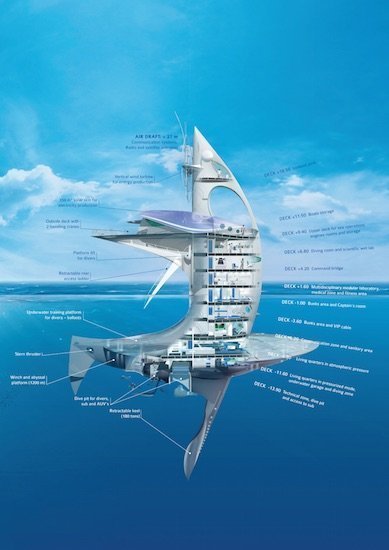 “SeaOrbiter paves the way for a paradigm shift in the field of marine science by the passage of discontinuous practices to continuous capacity of exploration, observation, experimentation and sampling in the marine environment,” Fuchs maintains.

The vertical design of the vessel brought challenging stability issues, which have been resolved with a stabilising disc.

With the design complete the SeaOrbiter team is seeking funding and has kicked off a worldwide tour. Fuchs reckons nine ships are needed to cover the world’s major oceans and seas – each ship costing in the region of EUR50m. Fuchs and his team have held discussions with shipyards around the world – a landmark first order could happen within the next 12 months.