The global shipping industry is watching closely for any official announcement from Beijing on whether the Lunar New Year holidays will be extended by another week in the ongoing battle against the coronavirus, which has now infected more than 31,000 people.

The holidays have already been extended by one week causing significant supply chain repercussions around the world. No official announcement has been made by the Chinese government yet on another extension with the ministry of transport saying today it is expecting large volumes of passengers on transport networks over the weekend as people are expected to get back to work on Monday.

However, Guangzhou Railway Group said it has not seen any large scale returning passenger volumes yet, and the daily passenger volume at the station is still at a historically low level.

Japanese carmaker Toyota has said it will be keeping its 12 China plants closed for at least another week with February 17 pencilled in for a resumption of production, although a spokesperson for the giant conglomerate said further delays could not be ruled out.

Splash contacts in the manufacturing sector across China said today that it was very unlikely most factories would be able to guarantee full production from next week due to a lack of manpower.

“Every week that China remains closed will mark a slowdown of economic growth,” Sand said.

The tanker trades have been brutally cut down by the coronavirus. China is the largest crude oil importer in the world with 506m tonnes of crude oil imported in 2019. 70% of seaborne imports to China are carried aboard VLCCs.

VLCC spot rates, which were above $100,000 a day last month, are now trading below opex, with Middle East to US Gulf shipments at just $5,237 per day yesterday.

Alphatanker, part of AXSMarine, reported in its latest weekly report that both state-controlled and independent refiners have throttled back their activity over the past week with reports of a country-wide cut in runs of around 15%. This equates to a drop of around 2.1m barrels per day, or one VLCC a day.

“There remains much crude on the water destined for China and thus in order to check inventory builds, Chinese charters are expected to cut their liftings significantly going forward,” Alphatanker predicted.

Navios boss Angeliki Frangou, commenting during an earnings conference yesterday for her tanker company, said, “We cannot determine the impact of the coronavirus in China on our market, as the fluid situation makes it impossible to assess accurately potential ramifications. “

In the gas markets, China National Offshore Oil Corp, the nation’s biggest LNG buyer, has invoked force majeure and told some suppliers it won’t take delivery of cargoes because of constraints caused by the coronavirus.

Soybeans from Brazil and the US are being held up on arrival in eastern China and Indonesian palm oil shipments are also being delayed.

Early indications would suggest that it is the car carrier segment that has the greatest amount to lose in the short-term from the coronavirus. It is not just Toyota cutting back production, but most major automotive brands as China is so important in the supply of all manner of parts to the car industry.

For instance, the world’s most productive car factory fell quiet on Friday as South Korea’s Hyundai Motor suspended all operations at its giant Ulsan complex. The five-plant network has an annual output of 1.4m vehicles.

Also in South Korea, Kia has said it will suspend three plants for a day on Monday, while the South Korean unit of French automaker Renault is considering stopping its factory in Busan next week, and Fiat Chrysler has said it could be forced to halt one of its European factories.

The fact that the coronavirus started in Wuhan in Hubei province is most unfortunate for those involved in the automotive supply chain. The city of 11m people has often been described as the Detroit of China, being one of the country’s most important bases for car manufacturing with Dongfeng, General Motors , Honda Motor , France’s Groupe PSA and the Renault-Nissan-Mitsubishi alliance all present in the city that sits on the banks of the Yangtze river.

Agency Wilhelmsen Ships Service has provided a useful interactive map on port restrictions due to the spread of the virus around the world. Readers can click on the map below to get the latest details. 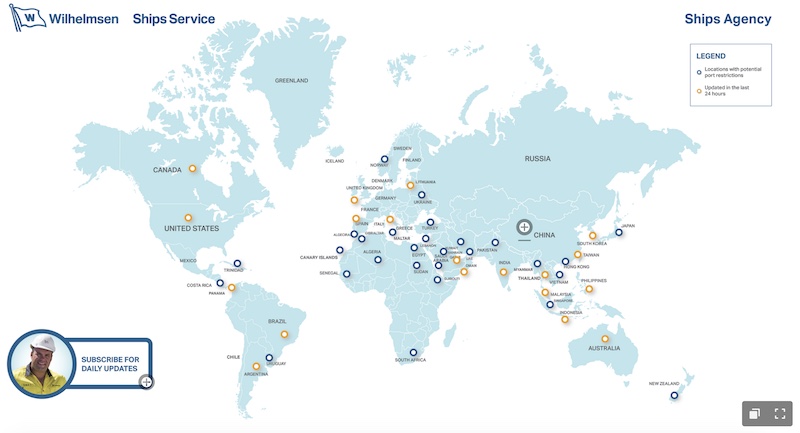