The tenth week of the year has finally brought some stability to the bunker price differential between high and low sulphur fuel oil (HSFO and LSFO) with some analysts suggesting the current spread will stretch through the year, bringing an end to further scrubber investments.

Ship&Bunker’s average price spread between HSFO and and LSFO today for the world’s 20 largest bunkering hubs stands at $126.5 per tonne. In certain ports the price spread has ducked into double-digit territory in recent days, such as Malta where the gap between shipping’s two dominant fuels is just $72.5 per tonne.

A report from brokers Braemar ACM suggested shipping has now past peak scrubber based on the likely price spread for the rest of the year.

“Looking ahead the VLSFO-HSFO spread seems to be stabilising, and is not looking as intimidating as many once feared. Forward bunker prices for the balance 2020 indicate a differential of ~$140/t for the rest of the year. At this level, we don’t see owners rushing to place new orders for scrubbers,” Braemar ACM predicted, adding: “At the same time, $407/t VLSFO for the remainder of 2020, as suggested by the paper market, is not too difficult a pill to swallow for many owners: HSFO was pricing well above this level through 2011-14.” 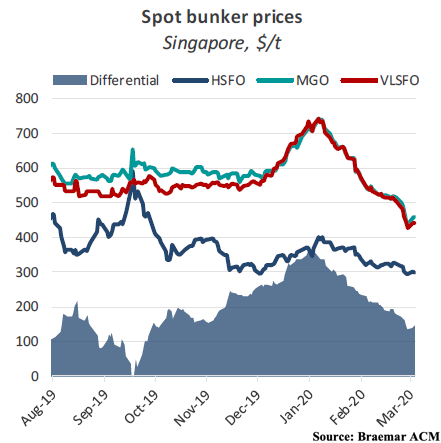 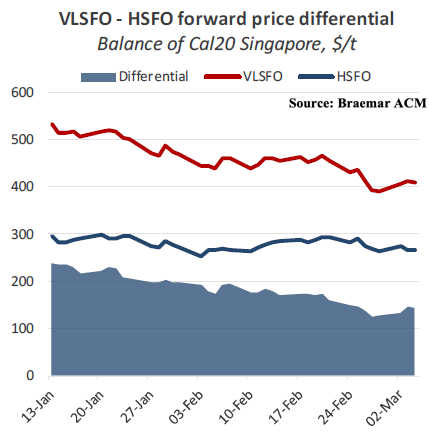 The analysts at Braemar ACM said the shipping industry was now “over the hump” in terms of yard congestion due to IMO 2020.

Pre-coronavirus, shipowners had been expecting the issues brought about the global sulphur cap – price spread, fuel compatibility and availability – to dominate daily operations in the first quarter of the year. However, after peaking on January 7, the price spread, known among bunker players as the Hi5, has narrowed fast by more than $200 per tonne to the point where calculations for scrubber payback times have had to be drastically reworked.

Speaking with sister title, Splash Extra last month, Rob Aarvold, general manager at Singapore-based owner Swire Bulk, said: “With the jump in the spread between VLSFO and HSFO to close to $350 per metric shortly after the implementation of the new IMO 2020 regulations on January 1 2020 all discussions centred around the validation of the scrubber strategy and the revised payback calculation. Subsequently this spread has collapsed to nearly $150 in Rotterdam, a pricing point that most advocates for the installation of scrubbers used as an outlier in the justification case.”

In practice the real spread is even more opaque given that most regular HSFO consumers are buying under contract, so with less spot activity and limited open market availability the spread remains somewhat theoretical and this is before incorporating delivery costs including waiting time for barge availability.

Latest data from Clarkson Research Services shows that in terms of ship numbers 3.5% of the existing fleet is fitted with scrubbers, but given how scrubbers have tended to be chosen more for larger tonnage this represents 19% of the existing fleet in gt terms. For the orderbook, Clarkson data shows that 34.7% of all ships still to deliver in gt terms are contracted with scrubbers.