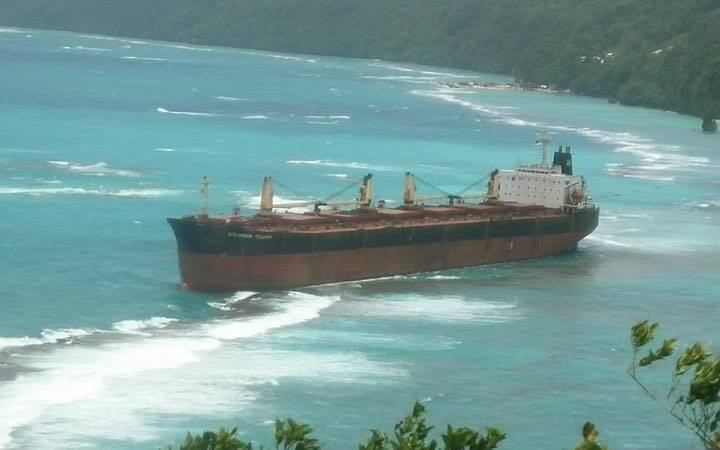 One month and one day on from the ship’s grounding, the insurer and the owner of the Solomon Trader

finally issued a release today, claiming “deep remorse” for the incident, which has become the worst man-made ecological disaster to hit the Solomon Islands.

The 1994-built Hong Kong-flagged Solomon Trader, insured by Korea P&I, ran aground on February 5 while loading bauxite in bad weather off Rennell Island. Its anchor dragged and the ship became lodged on a reef near the world’s largest raised coral atoll, a UNESCO site. The ship is owned by Hong Kong owner, King Trader.

When the ship grounded it was carrying 660 tons of bunker fuel. A gash in the hull has seen oil wash on to nearby shores. While the statement from the insurer and owner today said 70 tons of bunker fuel has spilled from the ship, Splash understands the figure is nearer to 100 tons. Charterer Bintan Mining has said the bulker is now a total constructive loss.

Reports of the Solomon Trader crew being absent from the vessel or intoxicated celebrating Chinese new year at the time of the grounding were deemed to be false, according to the statement issued today.

Australia has deployed significant resources to try and help clean up the disaster, while also stressing in recent days that the onus is on the owner and insurer to shoulder the costs of the clean-up.

The restoration of some onboard power yesterday has enabled a deck crane to lift key salvage equipment onboard.

The task of transferring the remaining fuel oil on the vessel to higher and safer tanks is progressing, with a view to the oil being pumped to a barge which is due to arrive shortly from Vanuatu.

Boom placement and shoreline cleaning is finally underway, while salvage divers are on standby to conduct external examinations of the hull and, if deemed possible, plug hull breaches with sealing compounds.

The Solomon Islands’ National Disaster Management Office (NDMO) stated in a release that Resolve and TMC Marine are the two salvage companies on site.

“Initial attempts to salvage the vessel was hampered by the weather and followed by damages caused by looting activities by communities to the vessels,” the government report stated.

Damage assessment of the vessel shows that the engine room is completely flooded up to head level of the engines, while 90% of equipment on the ship is damaged. The ballast tank on the port side was damaged and the accommodation and bridge were completely destroyed.

As well as admitting the challenges faced by the remote location of the grounding and the limited local infrastructure to handle a spill, the NDMO hit out in the report at the insurer and the owner for their “limited communication” in detailing how they planned to handle the crisis.

A wreck removal order will be handed to the vessel owner shortly.

The local Solomon Star, meanwhile, has reported that crew on two barges discharged their cargoes of toxic bauxite into the sea on the day after the ship grounded.

“From our village we could see them, using machinery to throw the bauxite soil from the barges into the bay,” chief Raymond Sau, an eyewitness from Avatai village on Rennell Island, told the Solomon Star.